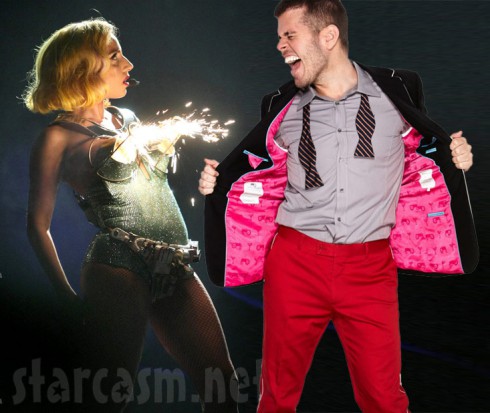 Blogger Perez Hilton (real name Mario Armando Lavandeira, Jr.) played an integral role in helping Lady Gaga’s skyrocket to fame, championing her music and providing invaluable exposure on his site PerezHilton.com with constant positive coverage just before, during, and after she took the world by storm. Lady Gaga reciprocated that kindness after hitting it huge by interacting with Perez publicly, including often posing with him at events.

But, something must have happened prior to Lady Gaga having surgery on her hip in February that severed their friendship because the two are currently in a public online feud. Lady Gaga tweeting yesterday that she still has a photo of herself in a wheelchair after her surgery that she alleges Perez Hilton sent her along with the word “KARMA” written across it with a picture of Madonna pointing a gun at her! Here’s the full tweet:

Still have the text Perez sent me of me in a wheelchair w the words KARMA written across + Madonna pointing a gun at me. Day of my accident

The tweet caused Lady Gaga fans (aka “Little Monsters”) to begin tweeting negative comments to Perez Hilton by the thousands, and Lady Gaga responded by asking her fans to stop and “ignore” Perez:

Please monsters do not be affected by someone like this NOTHING merits this kind of hatred. Im ok & I always survive. Ignore him. Just Dance

Lady Gaga’s initial tweet was probably in response to a seemingly nonstop onslaught of negative commentary from Perez Hilton abut Gaga herself as well as what he considers to be disappointing sales for Gaga’s latest single, “Applause.” Perez has posted numerous articles pointing out how the song never managed to make it past Katy Perry’s new single “Roar” in the charts and has already fallen to Number 5 behind “Roar” and singles by Robin Thicke, Luke Bryan and Jay Z.

Here are a series of Perez Hilton Facebook posts about Lady Gaga’s “Applause” from just the past five days, including links to stories about Lady Gaga ripping off other artist’s music and publicity moves. And remember, there are even more positive Katy Perry “Roar” posts than there are negative “Applause” posts!

UPDATE – The Perez/Gaga feud has since escalated exponentially! Click here to read Lady Gaga’s claims that Perez Hilton is stalking her and trying to move into her NYC apartment building, then click here to read Perez Hilton’s lengthy statement about those allegations alnong with Lady Gaga’s response calling Perez a liar and mentioning “psychotic text messages” he sent her, then Perez Hilton’s response calling Gaga fake and “cruel” as well as claiming she “purposefully tried to sabotage other artists.” 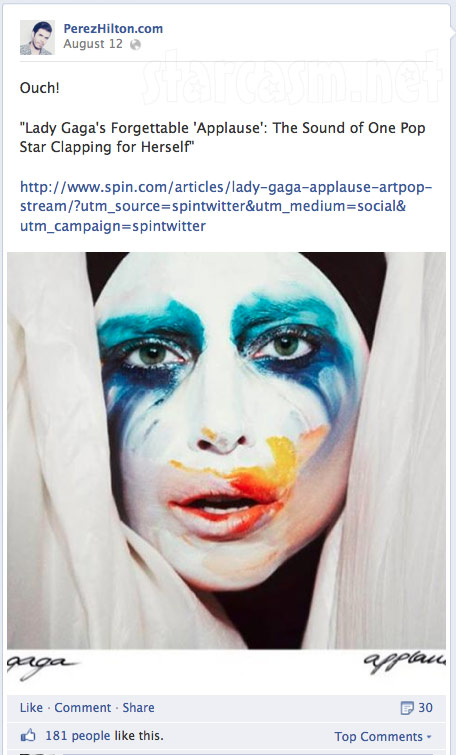 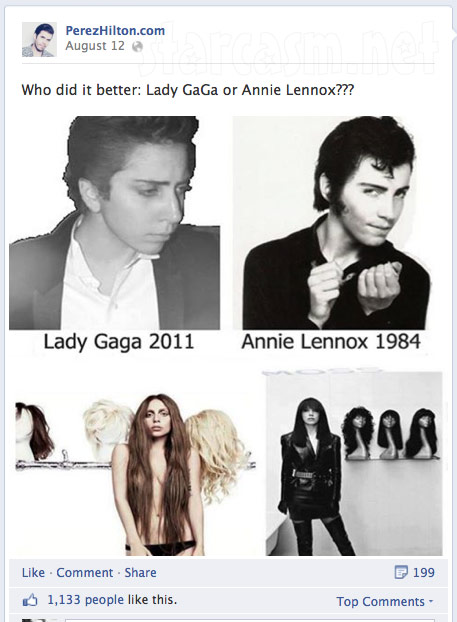 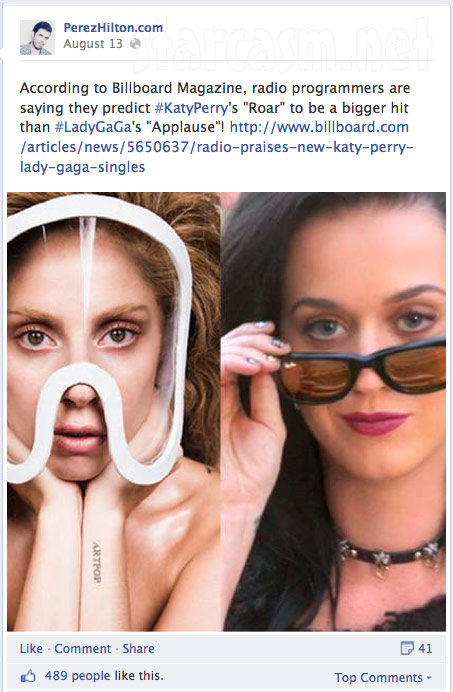 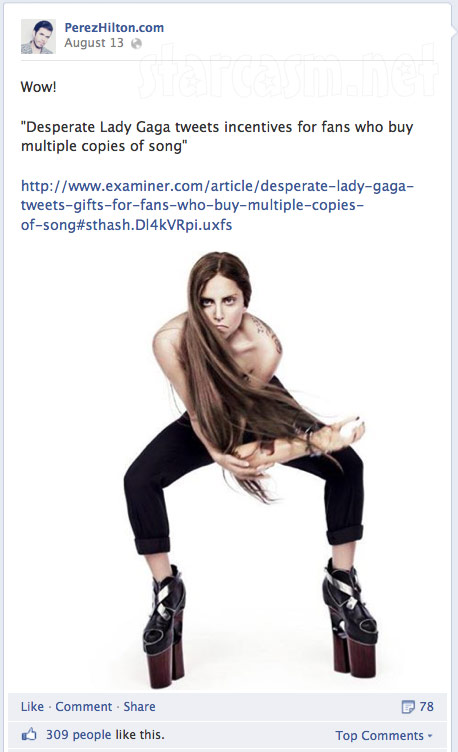 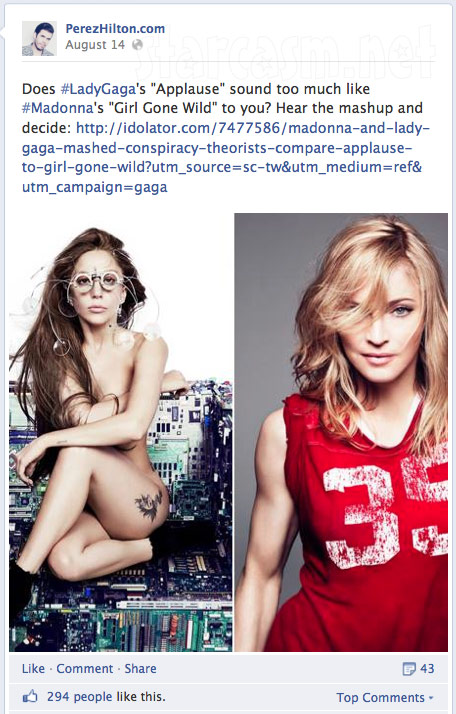 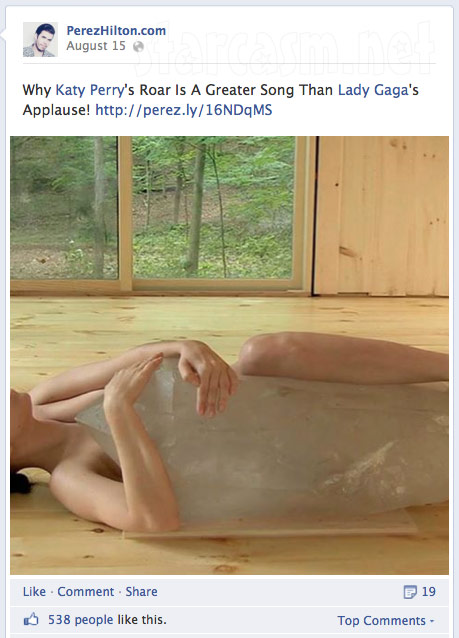 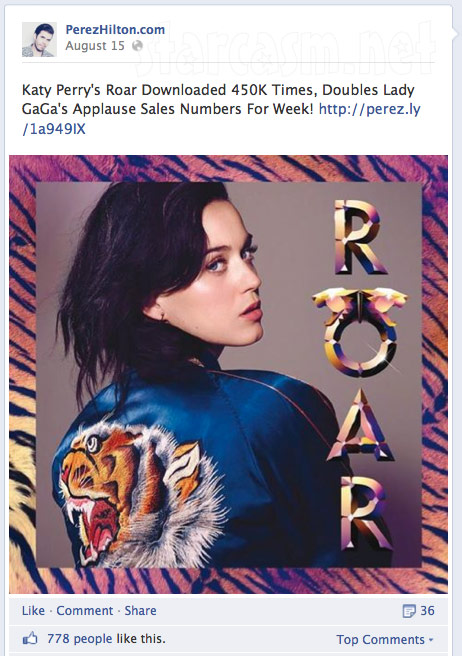 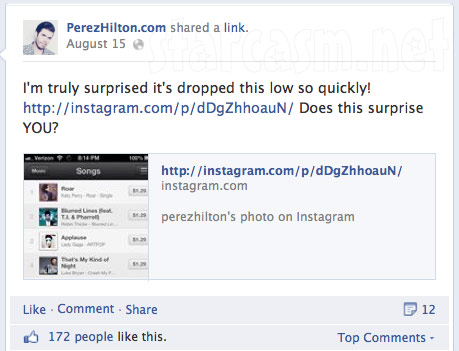 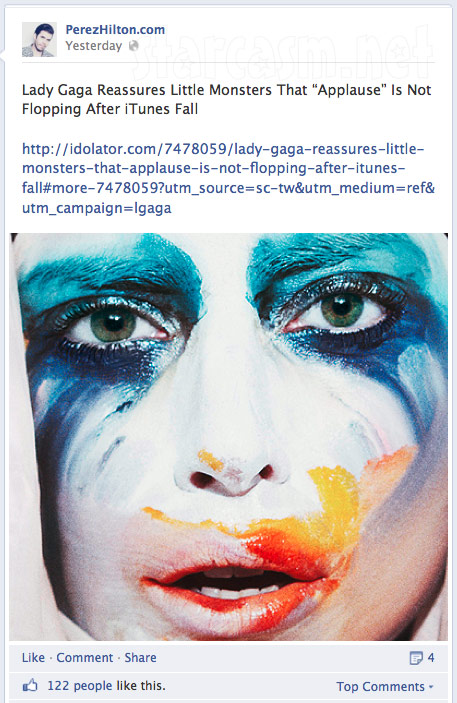 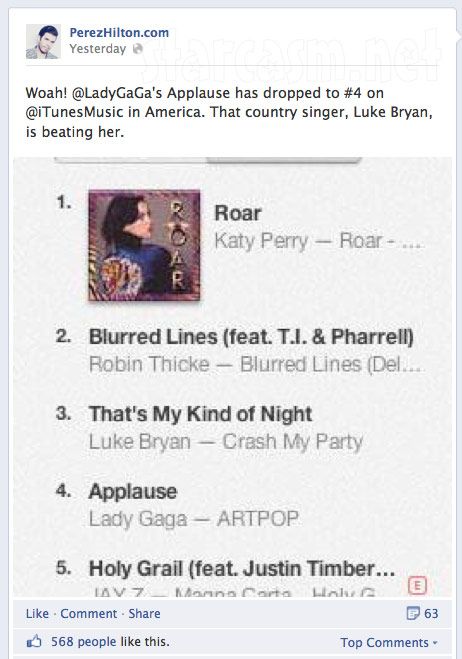 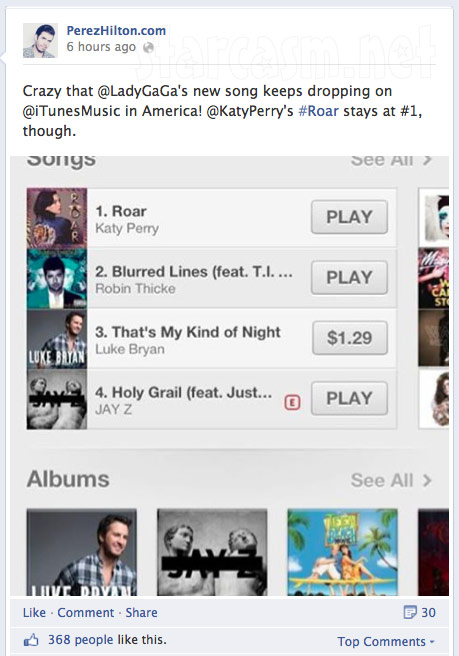 Perez has also been taunting Lady Gaga on Twitter, retweeting numerous negative comments about her and tagging her in pro-Katy Perry and pro-“Roar” tweets like this one:

So what do you think? Is Perez Hilton’s obsession with highlighting the perceived disappointing sales of Lady Gaga’s new single “Applause” (among many other things) just him expressing his opinion, or is it bullying?

Lady Gaga’s black “Fame” perfume was made with her own blood, smells like poison and expensive hookers