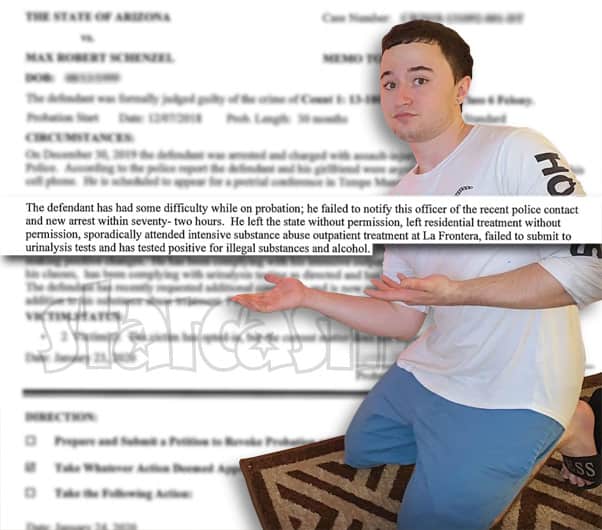 Unexpected dad Max Schenzel caught a huge break late last year thanks to his probation officer. He was facing a deferred jail sentence of 90 days after pleading guilty in September of 2018 to stealing credit cards and casino vouchers from his friend’s sleeping 77-year-old grandmother. Despite continued drug use and multiple other legal issues, Max’s probation officer recommended in July that his pending jail sentence be deleted, and the judge signed off on it.

On July 22, Max’s probation officer submitted a petition to modify the terms of his probation by deleting the jail term completely. “The defendant participated in a thirty day inpatient substance abuse program, is currently participating in Intensive Outpatient Treatment three days a week for three hours a day at La Frontera and has been attending as directed,” the probation officer argues.

However, the petition mentions that Max has not attended all of his office appointments and adds that he only recently obtained employment. He also missed two urinalysis tests, but he did show up the following day to take those and pass. “He has tested positive for Fentanyl on one occasion and admitted that he has been using about once a week since leaving residential treatment on May 22, 2019,” the petition states.

Despite having his jail sentence deleted, Max remains on probation from the conviction until May of 2021.

On December 30, 2019 the defendant was arrested and charged with assault-injury domestic violence by Tempe Police. According to the police report the defendant and his girlfriend were arguing and he threw and hit her with his cell phone. He is scheduled to appear for a pretrial conference in Tempe Municipal Court on February 13, 2020.

The defendant has had some difficulty while on probation; he failed to notify this officer of the recent police contact and new arrest within seventy-two hours. He left the state without permission, left residential treatment without permission, sporadically attended intensive substance abuse outpatient treatment at La Frontera, failed to submit to urinalysis tests and has tested positive for illegal substances and alcohol.

Not mentioned in the memo are Max’s numerous arrest warrants for failing to appear or his underage drinking charge while at a casino on July 4. (The latter of which was actually prior to the initial recommendation to delete his jail sentence.)

Despite Max’s blatant aversion to adhering to his probation requirements or the law, his probation officer once again came to his defense in the concluding paragraph of the memo:

However, recently the defendant has been making positive changes. He has been complying with his intensive outpatient counseling, attending the majority of his classes, has been complying with urinalysis testing as directed and has been taking all medications as prescribed. The defendant has recently requested additional counseling and is now enrolled in anger management classes in addition to his substance abuse treatment. Please advise if any further action is needed.

So what was the judge’s decision this time around? He decided not to decide and responded to the probation officer by telling her to “take whatever action deemed appropriate.”

There has been no further update on the case since the judge’s decision to remove the ball from his court.

We will continue to monitor Max’s multiple open court cases and share any major updates.

Lexus Scheller is returning to TLC Unexpected, according to Shayden