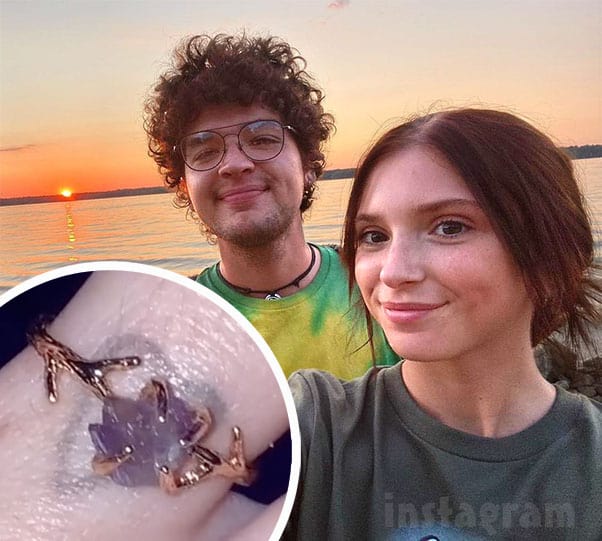 Former Unexpected mom McKayla Adkins shared some good news with her social media followers this week as she proudly announced that she and her boyfriend of one year, Ethan Tenney, are now engaged!

McKayla broke the news on Thursday with a photo of her engagement ring. “We’re engaged!!!!” she captioned the image.

Here is the post from McKayla’s backup account, due to her main account requiring that you be 18 years of age to view it. It’s the same photo, but a slightly different caption:

The engagement ring is a bit non-traditional. It appears to be an uncut amethyst crystal held with small tree branches. Here is an Amazon listing from Blue World Treasures that looks nearly identical.

For those wanting a closer look at McKayla’s bling, she shared a TikTok video just for you:

The engagement announcement inspired a lot of congratulations from McKayla’s fans, and she responded on Instagram:

I wish I could like all your comments 🥺 just know I love and appreciate you all. Thank you for the kind words ❤️

While the responses were predominantly positive on McKayla’s social media pages, there were more proportionately more negative responses on fan accounts and forums sharing the engagement news.

“Don’t break this one off after you have the dress like you did with the first one…” one commenter wrote on @tlc.unexpectedteaa’s post about the engagement.

“He doesn’t treat me like sh*t so no worries babe,” McKayla responded.

The topic of McKayla’s previous engagement to ex Caelan Morrison, and the resulting wedding cancellation, inspired McKayla to record a TikTok video response:

I love how people are so invested in the last time I was supposed to get married and how I’m getting married now. The fact [is] that people are really concerned about it!

[They’re] like, “Hopefully you don’t call off this wedding, too.”

OK, I actually love this dude and he treats me amazing. My last relationship was sh*t. So it’s a good thing me and him didn’t get married, especially for our children. And even though that’s none of your business, I have to put it out there because it was on TV forever ago. Like, literally years ago.

Not to mention, there have been plenty of things that have happened that make me even more happy that I didn’t get married in the past. [McKayla gives the middle finger and sings a few words I can’t quite make out.]

Not to mention a TV show was pressuring me to get married, so definitely not the right reason.

Former #Unexpected star @mckayladkinss shaves her head again after a botched highlighting job resulted in her hair becoming rubbery & falling out. Get McKayla's full explanation and watch a video of her boyfriend shaving her head — and then his own! 💇 https://t.co/j2ryqUAhl7 pic.twitter.com/5eLXWnStRK

McKayla also shared a TikTok video in response to those wanting to know details about the proposal, although I can’t tell if she’s joking, or if the proposal really was straight from Cardi B and Megan Thee Stallion’s “WAP” song.

“There was no video,” McKayla says in a funny voice. “We had a sensual night, and then he proposed because I gave him some good pu**y.”

Congratulations to McKayla and Ethan!

Meanwhile, McKayla is already moving on to the wedding planning stage. On Sunday she shared an Instagram story with the message: “Looking for a photographer/ makeup artist for my wedding!!! Pls dm me if interested (((:”

UPDATE – McKayla may need that wedding photographer and makeup artist ssoner rather than kater! She announced on May 9 that she is currently pregnant and expecting to get married in TWO WEEKS?! Link in the tweet below:

#Unexpected @McKaylAdkinss is pregnant with her 3rd child and getting married in 2 weeks!? Watch her pregnancy reveal! Plus, she answers questions like: What will happen to her OnlyFans account? Was she trying to get pregnant? Will she stop smoking weed? https://t.co/hWjfOglzdR pic.twitter.com/cFBldVfSij

As we previously posted, Unexpected is currently struggling mightily in the ratings, especially compared to the previous season. Perhaps TLC might consider bringing McKayla back for Season 5 given the guaranteed wedding drama? If so, I guess the next question would be whether or not McKayla (and Caelan) would be willing to return. I believe it would all come down to how much $$ TLC offered.