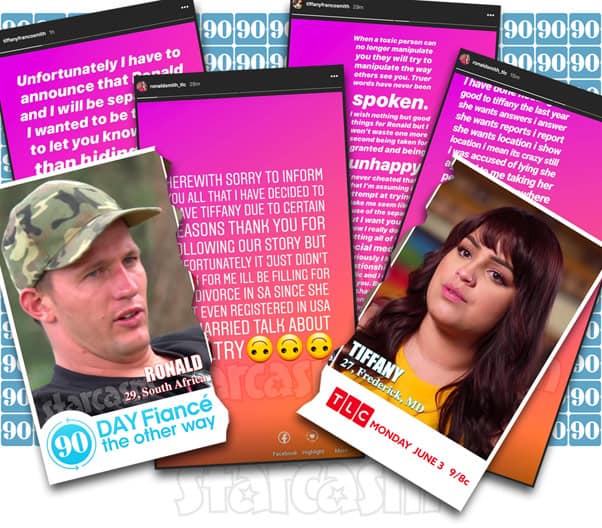 It has been quite the emotional roller coaster for 90 Day Fiance couples from the United States and Africa this week! One day after wedding photos confirm that Angela and Michael got married in Nigeria, 90 Day Fiance: The Other Way star Tiffany Franco announces that she and her South African husband Ronald Smith are calling it quits.

“Unfortunately I have to announce that Ronald and I will be separating,” Tiffany began a text graphic posted to her Instagram story earlier today. “I wanted to be the first to let you know rather than hiding it and putting on a facade for social media,” she continued. “Thank you guys for following our story we really love each other but some things are just irreparable. We both deserve much better than what we can offer at the moment. -Lots of love from us.”

Tiffany’s rather tactful and respectful announcement elicited a not-so-surprisingly immature response from Ronald. “Herewith sorry to inform you all that I have decided to leave Tiffany due to certain reasons,” his since-deleted all-caps Instagram story text graphic response began. “Thank you for following our story, but unfortunately it [just] didn’t work for me.”

Ronald then claimed that Tiffany never registered their marriage in the United States, so he would be filing the divorce papers in South Africa. “I’ll be filling [sic] for the divorce in SA since she isn’t even registered in USA as married. Talk about adultry [sic].” He concluded the post with three upside-down smiling face emoji.

News of Ronald’s low road response eventually floated up to Tiffany, and she opted to take the gloves off and engage Ronald at his level. “When a toxic person can no longer manipulate you they will try to manipulate the way others see you. Truer words have never been spoken,” she began her Instagram reply post.

Despite removing the gloves, Tiffany managed to keep things respectful as she responded to Ronald’s “adultry” comment and revealed a little more about why the relationship ended:

I wish nothing but good things for Ronald, but I won’t waste one more second being taken for granted and being unhappy.

I never cheated. That is what I’m assuming is an attempt at trying to make me seem like the cause of the separation…I want you all to know I really don’t like putting all of this on social media, but obviously I know our relationship is very public and I owe this to all of you.

But that is all I will share for now. He can continue to lash out and say all the negative things he wants about me, all I did was love him too much and try to hard to make things work.

Okay he deleted his status update because his whole family probably shat on him for that. I never cheated he has never stopped lying and I’ve been trying to fix things with him (he’s supposed to be trying!!) but he is just not really there he is just interested other things.

I had Carley in America because he was not able to keep a steady job and I was scared to have a child and depend on someone who might not be dependable. I know I could support the kids. I made the best choice for the kids. He worked after I left and lost the job – never sent money for Carley, only messed up time and time again.

I made a big mistake with him, and I accept that. But calling me a cheater so that people think I’m the problem is just f***ing ridiculous. How is he the root of all problems and then he just makes some dumb accusation to make me look like sh*t? How does anyone believe that?

I don’t care honestly. He’s going nuts online messaging people and saying I cheated, saying I won’t let him see his daughter, saying I’m controlling. I’m none of those. I have always fought with him because he’s never stopped lying and then he expects trust immediately after lying. He just last week came clean about lying about something very serious and I have to GET OVER IT as he says.

So when he says “I’m going to (random person’s) house,” I say something like “I don’t know how I feel, like you’re not being honest. Who’s gonna be there? Where are you actually going? Can you send me a video? I’ve never heard of this person before.” Which I understand is WRONG. But damn man I was really trying. And I was hurt so many times. I was lied to so many times, and I just wanted it to stop.

The last thing he lied about was where he was and I figured it out myself, and he called me crazy, but this time I had proof. He still called me crazy. Enough is enough. I’m just not happy. I just want to love myself enough to know I don’t deserve this. This is not a good example for my kids. This is not what love is and no one deserves this. Trust is the foundation of love.

I feel very dumb and I made a very stupid choice and I accept that I should have been smarter. I feel very stupid and very ashamed. I just want this to be over.

UPDATE – Ronald has added more via Instagram, and has re-posted his initial statement. Unfortunately, his second text graphic was cut off a bit at the top and bottom: 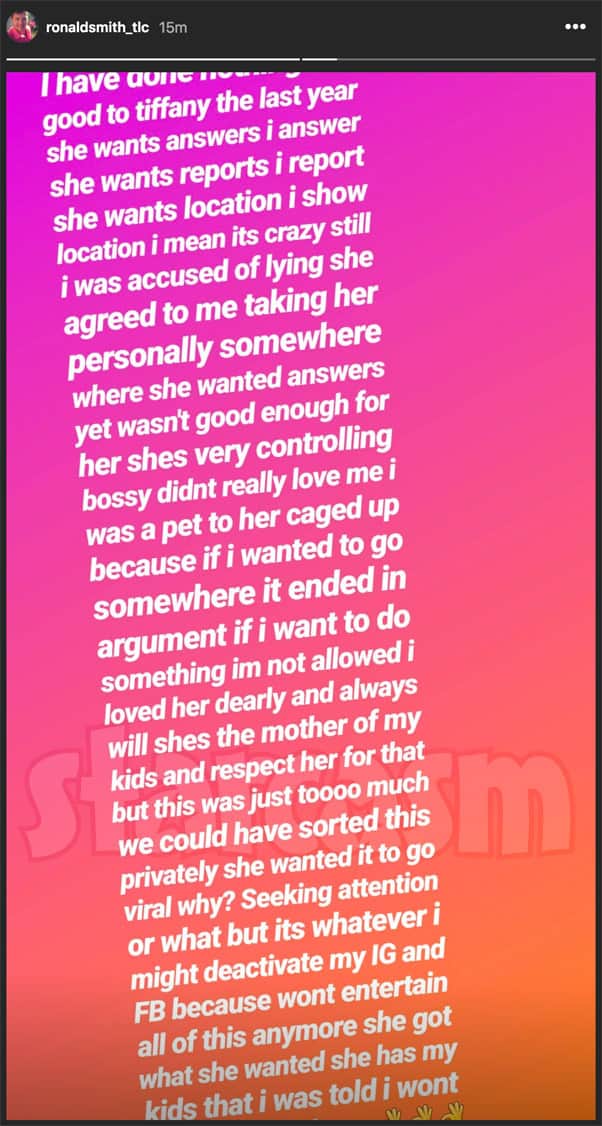 The break up comes roughly a week after Ronald returned to Instagram for a post praising his wife, her son Daniel, and their daughter Carley Rose. “I trully [sic] with out a doubt have the cutest ❤and most beautiful wife ?@tiffanyfrancosmith and blessed with 2 gorgeous kids? just look at them!!!!” Ronald captioned a gallery of photos on January 19, his first Instagram post since Christmas Eve. He concluded his caption with a series of hash tags that included #proudAF, #prouddad and #proudhusband.

We exclusively revealed #90DayFiance #TheOtherWay Tiffany's pregnancy back in May, and on July 3 she gave birth to her & husband Ronald's daughter Carley Rose! In the United States! Get all the baby deets, including photos and video! https://t.co/EoDzHSzLti

It’s unclear what the break up will mean as far as Ronald’s ability to see his daughter Carley. I am assuming that he is still unable to come to the United States, so it will be completely up to Tiffany whether or not she will take Carley to South Africa to see her dad? I’ve done a lot of reporting on custody cases, but I have very limited experience with international custody cases in which one of the parents is not allowed in the other’s country! (One recent exception would be the wife of 90 Day Fiance: Before the 90 Days star Geoffrey Paschel, who was in the United States illegally when she took the couple’s two young boys and returned to her home country of Canada amid accusations of abuse by Geoffrey.)

As a fan, the break up news is certainly disappointing. Tiffany and Ronald managed to win over a lot of viewers over the course of The Other Way‘s inaugural season, thanks in large part to her son Daniel and his loving admiration for his stepdad.

However, despite winning over viewers, even those that were #TeamTiffonald noticeably winced and shook their heads when she got pregnant so quickly. Given Ronald’s criminal history, addiction issues, their limited time together, and his inability to enter the United States, having a child together seemed like a really bad idea — even if the couple remained together.

On a side note, given that Tiffany publicly announced the split, I think we can assume that she and Ronald will not be back on TLC any time soon. If they were going to be on Happily Ever After or The Other Way Season 2, then I’m certain the network and producers would have kept them from making the announcement.

UPDATE – More from Ronald in the form of a screen capped text message exchange with Tiffany about Daniel and Carley: 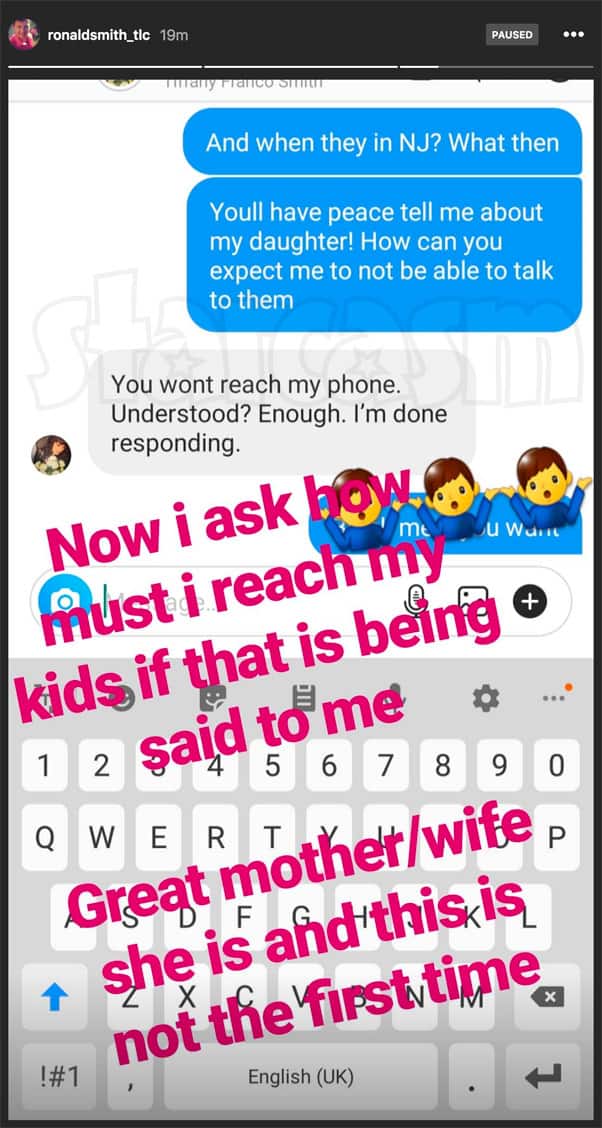 PHOTOS Katie Holmes out in NYC without her wedding ring