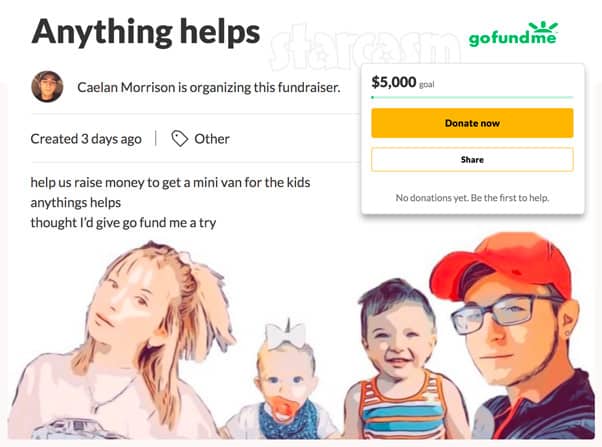 Unexpected OGs McKayla Adkins and Caelan Morrison are currently back together and living on their own. However, it seems that raising two kids has become a bit overwhelming financially for the reality star couple, and they have launched a GoFundMe campaign in hopes of raising enough money to buy themselves a minivan.

To clarify, it appears that the fundraising campaign was Caelan’s idea, and he announced it with a rather unfortunate Snapchat post on Martin Luther King Jr. Day in which he co-opted the civil rights activist’s “I Have A Dream” speech title: 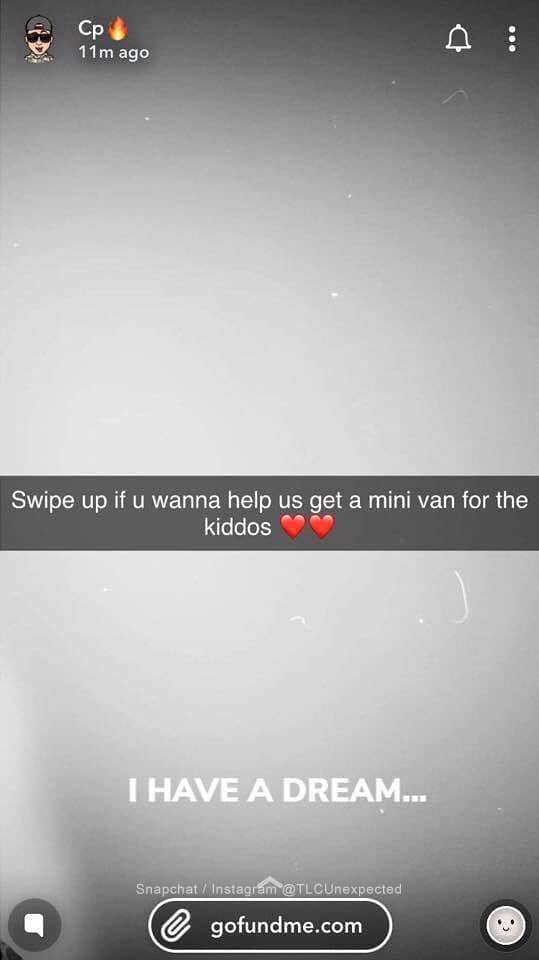 According to the campaign, the couple was looking to raise $5,000 for their family-friendly whip. The campaign appears to still be up, and they have managed to raise a total of zero dollars.

McKayla also made a pitch for fan money on her Instagram account, but she was testing the waters on potential paid shoutouts as opposed to GoFundMe: 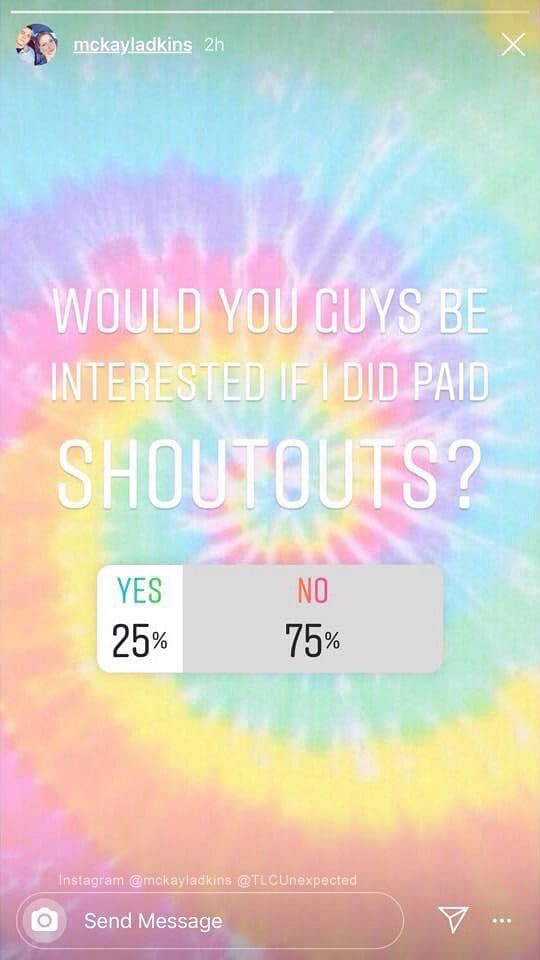 As you might imagine, McKayla and Caelan’s online solicitation drew some criticism. In addition to accusing the couple of “begging,” many of the critics mentioned McKayla’s recent videos in which she showed off her many tattoos and revealed that she recently began using medical marijuana, which she admits is “quite expensive.”

McKayla took to Twitter to respond to the negativity, and reminded everyone that she does have a job as a social media influencer. Here’s a full recap of her Twitter interactions on the topic, concluding with her announcement that she was quitting the platform:

MCKAYLA: Gracelynn’s up right now and I was just thinking.. some of you guys get so upset when I ask if you would be interested in paying for a shoutout or mention anything about money. The immediate response everyone has is “get a job,” but do you not realize social media is my job?

TWEET: [GoFundMe link] Please learn to live within your means. You two should read Total Money Makeover and apply it to your lives.

TWEET: That is just embarrassing. Normal adults/parents don’t beg for handouts unless it’s an emergency.

MCKAYLA: I don’t find it embarrassing, Caelan wanted to post that so he did ??‍♀️ then he deleted it, it’s our accounts and we can post whatever we want.

TWEET: Honestly – the optics are awful when you state SM is your job but your boyfriend posts a GFM for a minivan for the kids. You’ve posted about frivolous spending but “help” to buy a family car? You have a SM job? And you make income from a TV show? And he works a job? That’s why.

MCKAYLA: 1. Caelan posted that not me. 2. No body had to help if they didn’t want to. 3. Social media is my job, and they’re my accounts I’ll post what I want on them. Doesn’t mean everyone has to agree with it ??‍♀️

TWEET: Gracelynn’s up right now and I’m most likely making my nana or grandpa care for her so let me tweet this sh*t.

MCKAYLA: This is hilarious considering I don’t even live with them anymore ??

TWEET: McKalyla when you have to start several go fund mes for things like furnishing a house and buying a car it’s time to get another job because this one is obviously not working out well for you.

MCKAYLA: I haven’t made any go fund mes lol and I save money for things I want. I’m not going to feel about that ??‍♀️

TWEET: Your kids are your job. Social media is a hobby on the side while you care for them. Does SM give you a salary and health insurance?

MCKAYLA: Being a mom isn’t a job?

TWEET: You use the money for tattoos and dumb stuff.

MCKAYLA: Yeah, I use money I’ve been saving for years for my tattoos and I will never feel bad about spending money I saved specifically for that ??‍♀️

MCKAYLA: I haven’t posted a go fund me, Caelan did. And as soon as he posted it he deleted it so.

MCKAYLA: Once again, Caelan posted that not me and as soon as he did he took it down. It’s our accounts and we can post whatever we want.

I’m not going to pick sides in the debate, but I did want to clarify a common misconception. Despite the fact that Unexpected is currently getting higher ratings than MTV’s Teen Mom shows, the cast members of Unexpected do not get anywhere close to the same amount of money. We’ve spoken to reliable sources who tell us individual cast members get less than $1,000 per episode initially. It’s our understanding that McKayla received more than that for her third season, but not a lot more.

In answer to your next question, there were 13 episodes in Unexpected Season 3, with a two-part Tell All. I believe the couples get a separate rate for the Tell All. As mentioned, this information comes from reliable sources, but I haven’t been able to confirm it 100% yet by seeing an actual contract or anything like that. I just wanted to explain why Kailyn Lowry, Chelsea Houska, and Maci Bookout are driving around in fancy cars and living in expensive houses while Caelan is on GoFundMe trying to get $5,000 for a used minivan.