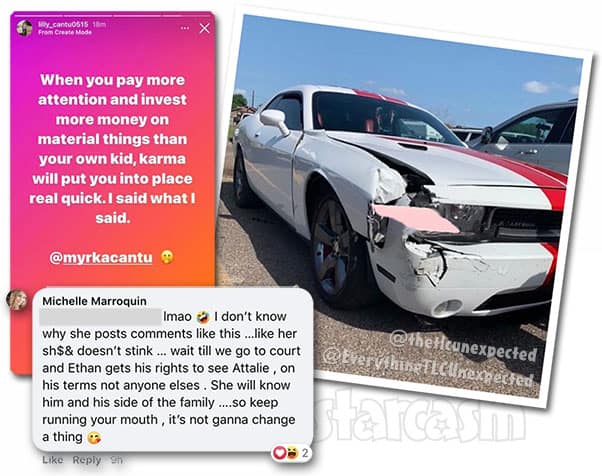 The break up between Unexpected parents Myrka Cantu and Ethan Ybarra continues to be messy. Also remaining messy is the drama between Myrka’s mom Liliana and Ethan’s mom Michelle.

The last time we checked in on Myrka and Ethan they were going back and forth online posting screen capped text messages on social media. Myrka also shared a document from her counselor that included Myrka’s claims that Ethan physically abused her.

In addition to the abuse allegations, Myrka seemed to be painting Ethan as a deadbeat dad in regards to their daughter Attalie. Ethan posted an Instagram live video in his own defense, which we included in our previous article. From that post on June 24:

Ethan went on to confirm that he doesn’t see his daughter Attalie much at all, but he argued that he is working all of the time. He also pointed out that he doesn’t own his own car and he and Myrka currently live 45 minutes apart. He said that he is close to being able to purchase his own car, and he hopes that will enable him to see Attalie more often.

Myrka has done multiple Q&A sessions with her followers since our last post, and she has answered quite a few of the inevitable questions regarding Ethan. Here are a couple from July 7:

QUESTION: How has Ethan been doing coparenting? I saw he has time for a gf but not his baby 💀

MYRKA: That’s what I’ve been saying. But I’m always the bad guy.

QUESTION: When was the last time Ethan saw your daughter?

MYRKA: Her birthday party, we had agreed to this past Saturday but he obviously had more important “things” to do.

Ethan was able to purchase a car, a white Dodge Challenger with red racing stripes, early in July. He shared a series of videos and photos of his new ride car on Instagram and Snapchat:

Ethan seemed quite smitten by his new whip, and he posted many more videos and photos over the next week or so. He was also quite smitten by his new girlfriend and shared posts featuring her as well. Of course, that eventually drew some additional responses from Myrka, including a TikTok video in which she expressed frustration over being criticized by pro-Ethanites.

“I wasn’t going to do this, but this is already getting on my nerves,” Myrka begins the video, posted on July 11. “If you are on my page just to see what I’m doing, get off! If you’re watching it for him, get off! Because obviously there’s other priorities than his own daughter, OK? I seriously didn’t want to do this, but when it reaches the point where his friends are on my stuff trying to talk down on me while I’m the one watching our daughter. No. Get off!”

Meanwhile, Ethan continued to flaunt his new Dodge Challenger lifestyle, including at least one video hinting at marijuana use. A Snapchat clip was capped and re-posted by @tlc.unexpectedteaa on July 15 along with the caption: “How he trying to smoke and still ain’t seen his daughter?”

The July 15 post elicited numerous comments, with several from Myrka herself:

MYRKA: If it makes y’all sad imagine how I feel? And I get called obsessed for expressing my frustration. Moms will always have it hard no doubt. I told y’all his true colors would show, and I didn’t even have to post a damn thing.

COMMENT: I hope she saves all these to take to court. Judge can burn his ass to pay a sh*t ton of child support 🤣🙌🏻

MYRKA: Plan on it ❤️

COMMENT: Wasn’t Mr Ethan taking Myrka to court.? IMAGINE Myrka saying, well your honor… I’m home with my kids 24*7 and well… he’s out doing this… shows judge this and the other sh*t show posts ✊🥴🤣🤣🤣🤣 @myrkacantu you got it under control mamaw. You’re a great mommy not that you need anyone to tell you. He showed his true colors. Btw take a screenshot… I don’t think judges appreciate things like this. LoL

At some point this weekend, Ethan made the 45-minute drive to visit his daughter and he shared a photo of her chilling in the front seat of his new whip. Soon after Ethan posted the photo, there were multiple reports online that Ethan had been involved in an accident. The reports featured a photo of his damaged Challenger.

One of the photos I found had some distortion, and the other had a large part of the damage covered with an account tag, so I combined them here: 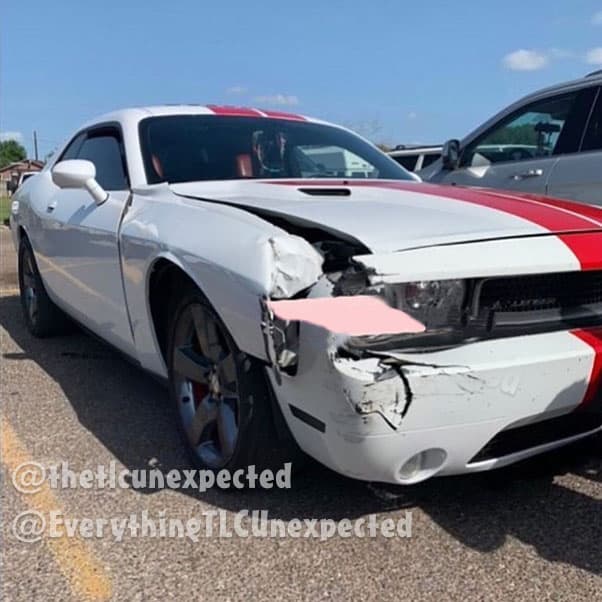 We don’t have any details about what happened other than the fact that Ethan’s daughter Attalie was not with him at the time of the accident. “Ethan had an accident,” an admin for @everything_tlc_unexpected captioned the photo. “YES he saw Attalie but it was after… She was DEFINITELY NOT in the car! He seems to be okay… I’ve spoken with him and I will be making ONE final post regarding Ethan after this, but I didn’t want this topic to be blowing up and asked about a million times so I’m posting them separately!”

The additional post was an announcement that the Everything TLC Unexpected Instagram and Facebook pages would not be doing any posts about Ethan for a while. “He has asked for EVERYONE to stop posting about him and for the time being we are going to respect that!” an admin explained. “Yes, he was on the show. Yes, he posts public stuff. But the hate and judgment inevitably will get to a person and could cause genuine depression amongst other things, and honestly we just don’t want to be a part of that. 😕 We hope our followers can understand.”

In addition to the tension between Ethan and Myrka, their moms have also been stirring up drama on social media over the past week or so. Here are some of the posts made by Myrka’s mom, Liliana, and Ethan’s mom, Michelle. It’s unclear exactly when each of the posts were made, so the timeline might be a bit off.

LILIANA: When you pay more attention and invest more money on material things than your own kid, karma will put you into place real quick. I said what I said. @myrkacantu 🤭 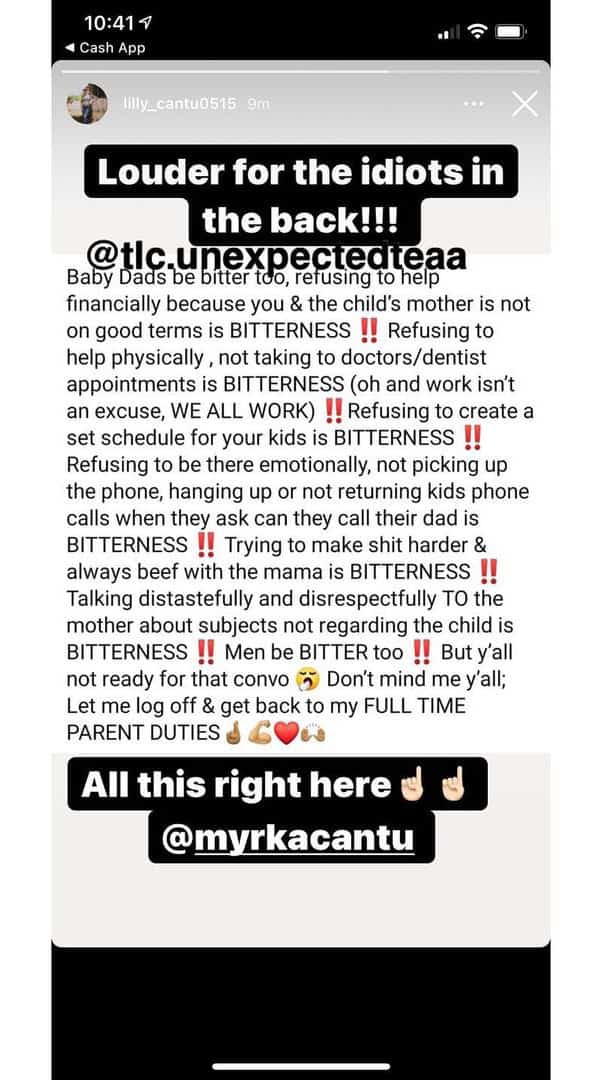 MICHELLE: Trying to hold my tongue… Sometimes feels like the most difficult thing 😒 …..

MICHELLE: When the apple doesn’t fall far from the tree…. Now that’s karma I said what I said 🤭

Liliana’s post about karma was shared in the Everything TLC Unexpected Facebook group and it drew responses from Michelle and her sister Melissa. (I assume Melissa is Michelle’s sister given the comments she made.) Here are their interactions:

MELISSA: Girl shut the **** up… You must be talking about yourself.🤣🤣.. Like when your stupid a** was over there getting plastic surgery and my Sis was supporting your kid because U supposably [sic] could not afford her…Lol ..🤣 Mejor cállate la boca estúpida!🤣

MELISSA: I said what i said..🤫✌ Michelle Marroquin

MICHELLE: lol 😂 Oh she believes in karma …what she needs to do is grow tf up 🤪😂

MELISSA: This chic just needs to shut her face.. She has no room to talk.. This pendeja talked all kinds of sh*t about how she couldn’t afford to have her daughter living at home because she had no money.😒.. Instead of talking sh*t she should be thanking you sis 😆 you helped that wonderful mamma save up for her new bod🤣 .. Girl you can fix the outside but the inside still ugly…

COMMENT: Melissa, how do you take time off to get a new bod? I thought she couldn’t get time off from work? Every minute away from her job would take “money from her pocket”? Wasn’t that her line from early on in the season? That was her reason for not being able to go to the OBGYN visits?

MELISSA: Exactly girl… They just love to talk sh*t but what these Biatch’s don’t know is so do I… 🤣😆

MICHELLE: lmao 🤣 I don’t know why she posts comments like this …like her sh$& doesn’t stink … wait till we go to court and Ethan gets his rights to see Attalie, on his terms not anyone elses. She will know him and his side of the family ….so keep running your mouth, it’s not ganna change a thing 😘

MELISSA: Yes…. She better get ready because I dont care how long it takes we will fight for mijo to have rights to his baby…

COMMENT: Wait a minute I’m confused. I don’t think Myrka posted this. Looks like Lily was posting at her.

MICHELLE: I know who wrote it.

That should get you all caught up on the Myrka and Ethan (and Attalie grandma) drama for now. Hopefully we won’t have another update until there is a development in the custody situation, but something tells me that neither Ethan nor Myrka will be able to keep themselves from continuing to make “I wasn’t going to say anything, but I’m not the bad person here” posts. Time will tell. Stay tuned!

#Unexpected The drama between Myrka, her mom Liliana, Ethan's mom Michelle, and Ethan's aunt Melissa continues with allegations of blackmail and more! We've got a full recap pieced together from ALL OVER social media! https://t.co/UNbMF8AoOb pic.twitter.com/oEm8VMqCyf

TLC Unexpected Season 4b ratings plunge, down 66% vs Season 3