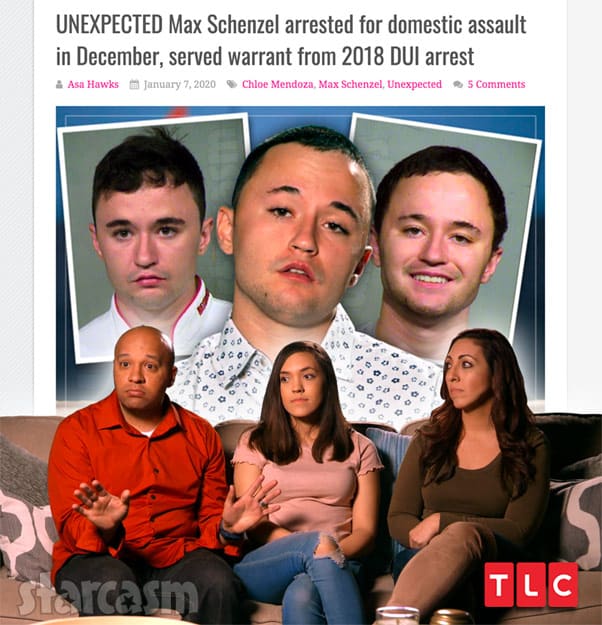 We broke the story earlier today that Unexpected dad Max Schenzel was arrested on December 30 for domestic assault, but at the time it was unclear who the victim was. After we shared our story, both Chloe Mendoza and her mother Jessica Bowman have confirmed that it was Chloe who was the victim of Max’s alleged assault. Despite the fact that they both admit Chloe had two black eyes after the incident, they have vastly different opinions on just how serious the altercation was.

Jessica and Chloe’s statements were made in the Unexpected Updates Facebook group. It all began when Jessica shared our article and added this lengthy statement:

I have seen these so called “happy” couple pictures of Max and Chloe being posted and have kept quiet. Now I am done. I can’t believe my daughter is allowing these things to go on in her home and around Ava. (Yes she is the victim it was just not stated in the report) I am over everyone who is on the Max bandwagon and thinks he is doing soo great and so happy him and Chloe are staying together. Shame on you for encouraging this type of relationship and making it seem like it is ok for Chloe to stay with this guy.

View the “Movie Night” picture, nobody noticed her black eyes (covered up with make-up). Nope, all everyone saw was how cute they were going on a date. [NOTE: We included the “Movie Night” photo in our initial post about Max’s arrest linked above.] Well of course he is posting so many couple pics now, because he has to show that they are so happy after what he did. Well usually when people have to try to show how happy they are, they usually aren’t.

Their relationship is toxic and if he is sober like he states, then he can’t blame this incident on drugs this time.

People tell me to have empathy for him. I do have empathy for people, and I am honestly one of the most forgiving in my family. But I can’t have empathy for someone who keeps doing wrong, and who is not trying to do better. I don’t believe posts, I believe in actions, and this kid has done nothing to change my POV. All I have seen is my daughter with 2 black eyes, a broken phone, showing up crying at my house, and Max being arrested over and over again. So NO I do not like this kid, and never will.

In the comments section of Jessica’s post, Chloe offered up her take on what happened, and her mom responded:

CHLOE: I was not hit. I asked Max to throw me his phone and when he threw it it hit me in between my eyes causing a bump, we started fighting about it because I knew this wouldn’t look good to my parents. Someone walked by the walls of my very thin apartment and called the police and when they showed up they said since I had a bump they had to take him in. That’s. What. Happened.

JESSICA: Oh and you have 2 black eyes from a soft throw of the phone. Sure honey, keep telling yourself that. And you said Ava was asleep. But report shows it was 7am, so I highly doubt that.

CHLOE: Yeah, when the bump went down it ended up giving me the “black eyes.”

Max is scheduled for arraignment on the domestic assault with injury charge later this month. We will continue to monitor the story and share relevant updates, so stay tuned!

UPDATE – Max has since responded to news breaking about his arrest, or at least Jessica reacting to news breaking about his arrest. “When will this lady just let us be?” Max wrote in a quickly deleted Instagram story post. “No one’s being harmed except when you start drama on social media….Sucks having to be the bigger person and keep your mouth shut but it works if you work it. #143 days sober.”

I have a couple of responses to Max’s post. Number one: Chloe was literally harmed during their altercation, even if it was just an accident. Number two: I think the “bigger person” is the one who doesn’t keep getting arrested, doesn’t keep skipping court dates, and doesn’t continue to fail paying fees and fines imposed due to illegal activities. Oh, and the bigger person is DEFINITELY the one who doesn’t steal credit cards and money from a friend’s sleeping 77-year-old grandmother.

I realize there are still a lot of Unexpected fans who simply do not care for Jessica, but even Jessica haters would have to be wearing some pretty crazy prescription glasses to see Max as the bigger person over the past couple years.

UNEXPECTED Why is McKayla wearing a wig at the Tell All?