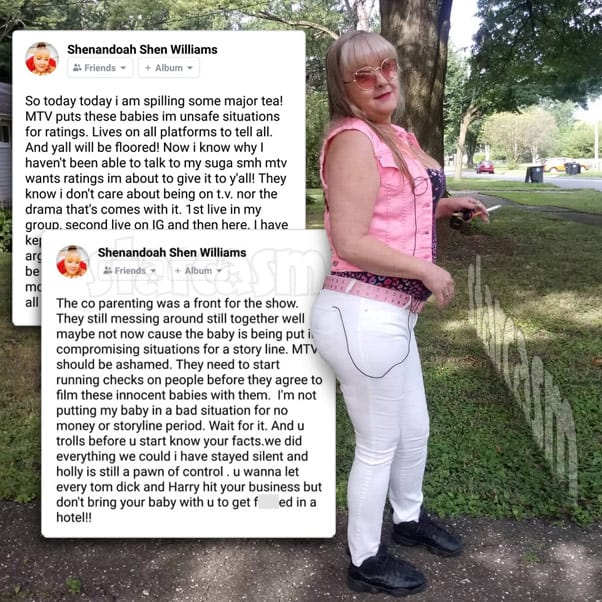 Teen Mom: Young and Pregnant grandma Shen shocked a handful of fans this summer when she announced that she and MTV had buried the hatchet over her claims that the network was racist, and that she would be returning to the show again. The repaired bridge lasted all of a hot minute before Shen burned it down once more with new claims that MTV puts the children stars of the show in “unsafe situations for ratings.” She also said that Bar and Ashley’s split and co-parenting was just a sham. Or at least I think that’s what she said.

“So today today [sic] I am spilling some major tea!” Shen wrote on Facebook and Instagram earlier today. (She makes posts on Facebook, then screen caps her own posts and shares the photos on her Instagram account.) “MTV puts these babies [in] unsafe situations for ratings,” she added, before teasing live video sessions on multiple social media platforms later today. 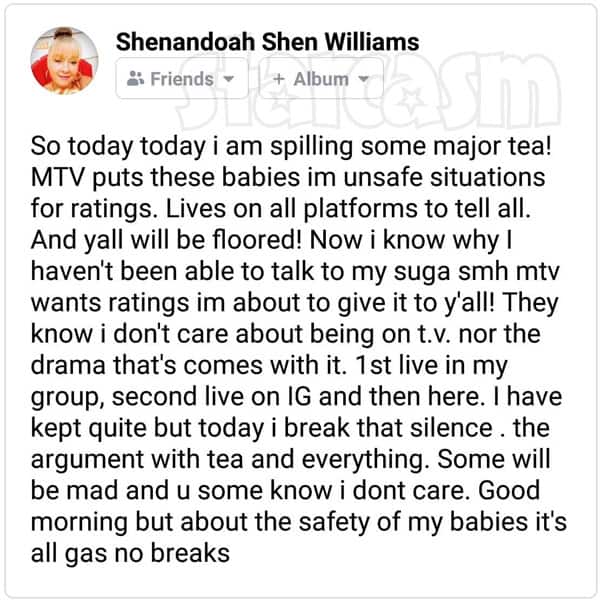 In a separate, since deleted post, Shen seemed to suggest that Bar and Shen never really broke up, and that their split and co-parenting is just for the cameras. “The co-parenting was a front for the show,” she wrote. “They still messing around still together well maybe not now cause the baby is being put in compromising situations for a story line,” she added.

MTV should be ashamed. They need to start running checks on people before they agree to film these innocent babies with them. I’m not putting my baby in a bad situation for no money or storyline period. Wait for it. And u trolls before u start know your facts. We did everything we could i have stayed silent and holly is still a pawn of control. u wanna let every tom dick and Harry hit your business but don’t bring your baby with u to get f**ked in a hotel!!

Unfortunately, Google Translate doesn’t have an option for Shenglish. But, I’m fairly certain that she is saying that Bar and Ashley have been pretending to be broken up even though they are still together behind the scenes. However, they might be having real relationship issues after Ashley brought their daughter along for a hotel hook up with a guy that has a questionable background. (Maybe something like a domestic violence arrest, a meth possession arrest, and another domestic violence arrest? Oh no wait, that was Bar.)

Actually, Ashley was reportedly dating rapper 600 Breezy, who does have a felony drug conviction. It’s unclear if this is Ashley’s reported hotel hook up that Shen was concerned about.

UPDATE – I checked Ashley’s Instagram and she shared a couple rather intimate video clips today in her stories with 600 Breezy.

Unfortunately, for those who RSVPed to Shen’s tea party, she just announced that she will not be going live until tomorrow. From Shen:

Hey loves can we do live tomorrow? Yaz has a friend over and I’m exhausted . but im home all day tomorrow so we can chat while i cook. All this drama and i walked into it again. It’s sad that the kids ask me to do something for them and then I’m the bad guy. Me and Ashley were good till i agreed to talk to Tea who is still a hot mess. But i haven’t spoke to holly in weeks now not even for her bday. They have a tendency of just shovelling sh*t instead of just saying it. I stopped calling. Now im fonking with my dumb ass child who never learns. Smh but i will give the details.

Also unfortunate for those who will be attending Shen’s tea party is the fact that the tea being served might not be as piping hot as expected because Bar has tossed in some ice. “I deleted last post for my son, but live will still happen,” Shen updated moments ago. (The post she deleted was the one about the fake co-parenting and the hotel hook up.)

We will try to catch Shen’s live and get the tea for you, but I’m a little worried that she’s going to hold back because of Bar’s concerns.