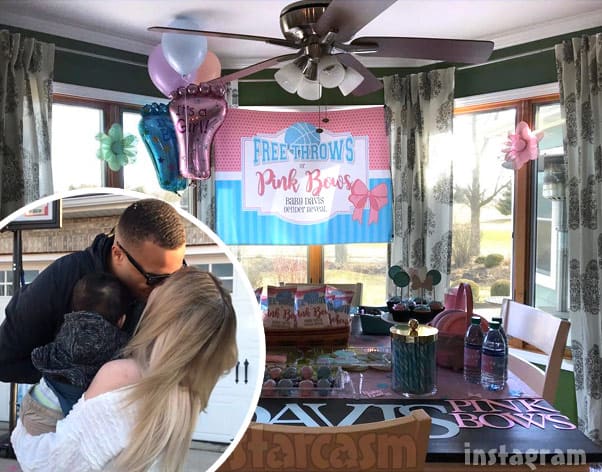 Teen Mom: Young and Pregnant star Kayla Sessler revealed last month that she is currently pregnant with her second child, her first with boyfriend Luke Davis III. In an Instagram story Q&A session with her fans earlier this month, Kayla said that she planned on doing a gender reveal on March 16 — and she delivered right on time!

Kayla and Luke hosted a March Madness inspired “Free Throws Or Pink Bows” themed party, which makes sense given that Luke is a college basketball player. In addition to the themed decorations, food, and gifts, the actual gender reveal itself came via alley oop! Luke’s friend tossed a ball full of powder to Luke, who jumped and slam dunked it through a hoop. Once the ball hit the pavement, it broke and revealed pink powder to those in attendance.

In other words, IT’S A GIRL!

I’m guessing that is Kayla screaming loudly once it was revealed she was expecting a girl, but I cannot confirm that. 🙂

Kayla’s mom Jaime shared a longer clip of the reveal itself, as well as LOTS of photos from the party — which looked really amazing! Here’s the clip and more galleries of images:

@_myfab4_ Thank you so very much for everything. It’s was an amazing party @kayla_sessler @bluechip_ld3 #love #family #itsagirl

Kayla has stated that she is due in August, at which point her son Izaiah (with ex Stephan) will become a big brother. She also revealed during her recent Q&A that she had two names picked out if it was a girl: Bria and Aubree. Being a Teen Mom blogger, I have to vote for the former because there’s already one Aubree in the Teen Momiverse!

Also revealed in her Q&A was the fact that Kayla’s current pregnancy was unplanned. She stated that she was on birth control, but didn’t realize that vomiting soon after taking the pill could neutralize its effect. From Kayla:

Ladies! If you are on the pill and you get sick with the stomach flu or any other sickness that causes you to throw up, YOUR PILL IS NO LONGER ACTIVE! If you throw up within 2 HOURS of taking it. It didn’t have enough time to absorb into your body. You’re literally throwing up your birth control.

Congratulations to Kayla and Luke! They seem extremely happy together, and Luke appears to be stepping into the fatherly role — a giant void created by Kayla’s ex Stephan — with gusto. I know I’m really looking forward to getting to know him a little better when Teen Mom: Young and Pregnant returns!