It sounds like another over-the-top drama-filled day for Teen Mom Young and Pregnant couple Bariki “Bar” Smith and his fiancee Ashley Jones as she claims to have called the police on him while his mother Shen claims that Ashley had him arrested!

UPDATE – Bar has been released and we FINALLY have more information about his arrest, which was so difficult to find initially because his first and last name were misspelled.

UPDATE – Bar has since confirmed that he is currently in jail in a phone conversation with his mother Shen. It appears as though Bar gave Shen access to his Instagram account so that she could post the clip there and he could verify the rumor himself to his followers. Here’s the video followed by a partial transcript of what Bar had to say:

BAR: “Hey everybody…this is Bar. I am in jail on some bulls**t, but whatever the f**k y’all hearing out there — what people saying — I promise you it ain’t true. So stop listening to this s**t. I’ll be home in a few days hopefully, so avoid all that s**t y’all hearing. I’ll be back soon. If y’all ain’t trying to do s**t, then don’t DM me, don’t say s**t, because I have you motherf**kers pulling the bulls**t like you care about a ni**a’s situation. So, if y’all wanna get in my DM, throw some money on the books ni**a!”

The initial claim that Bar was in jail came from Shen, who posted on Facebook Friday evening teasing more info to come. “I will check in later I got major updates to give y’all,” Shen wrote. “Bar in jail smh Ashley done put him in jail,” she added.

Ashley caught wind of Shen’s plan for a little tea party, and she responded with a series of text graphics on her Instagram story that seem to imply that she called the police on Bar for domestic violence. Here is a transcript of Ashley’s posts, with the single photo post left in because it simply cannot be translated into words:

I didn’t put anyone in jail. Maybe if you taught your kids to keep their hands to themselves more of them would have college degrees instead of criminal records. I found my courage today. And I thank the officers that came out and helped me.

@shenandoah know your facts before you speak. You can’t wait to run and tell everyone’s business well tell them how your son was arrested for domestic violence. You’re a trash excuse of a mother.

F**k you! F**k the trash you raised and f**k that lopsided ass ponytail. F**k the threats you send me. F**k that weak ass shens army. That’s why your contract got snatched. You’re only relevant cause I don’t like you. #cloutchasing ass grandma. Now I’m disrespectful. ??

You teach your kids some whack ass street code while everyone else is obiding REAL laws. So YUP. Go on Shen’s live and say I played police with your son and just know, anyone else you send to my house. I’m calling ??‍♂️ anytime you send me a threat I’m showing the ??‍♂️

So screenshot that. Wipe your *ss with it and send it over to the 51 and miserable club ?? not covering for your son anymore. Let’s not air out dirty laundry cause I been looking like the bad guy for wayyy to long. 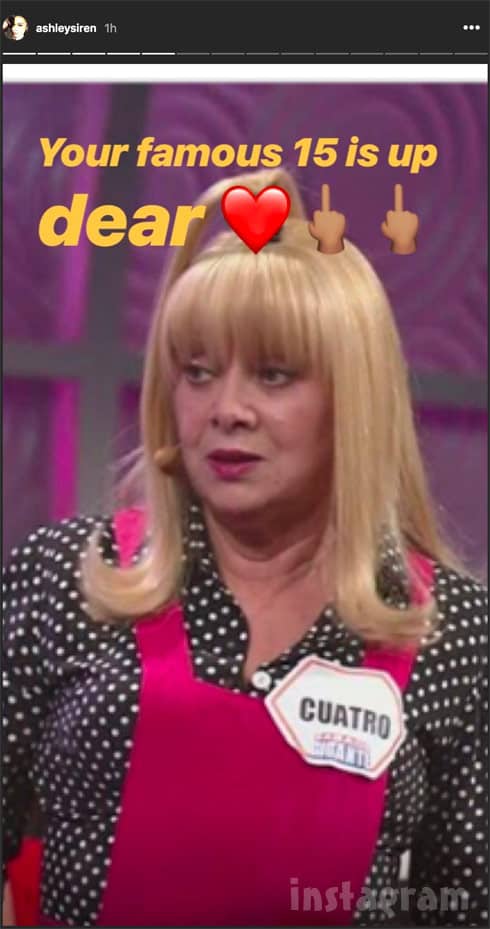 I told you that your son was abusive and your advice was to drop my clothes and suck his d**k. Cause that’s what got you so far in life huh? ??? #whenistrashday #whatcolorcandopeoplegoin?

With that old ass motel 6 furniture in your living room. You should be ashamed of yourself. They test to get a car but not to be a parent? You wouldn’t have passed. 1 restraining order didn’t go through but the 2 one will. Stay away from me and everyone over here blood. You never have the same energy of line and I’m way to accomplished to be playing with garbage.

Don’t @ me about putting sh*t on the internet. My family always looking bad cause they wanna poke the bear and run. F**k all of them over there. I’m hosting a petty blast Saturday. Don’t play with me. Period.

Shen then shared a post that conceded the fact that she didn’t really know what went down:

Listen i don’t know what happened all u know is Ashley called me freaked out about bar not coming home and why she comes for me when they fight is beyond me. I have nothing to do with nothing. She flipped yesterday after i took his sister to c him. She called me this morning freaking out . I ain’t blaming nobody for nothing cause i don’t know what happened i wasnt there. So keep the questions I don’t know I just had an amazing massage now with my grand babies relaxed

Leave me out of it. I didnt ask bar what happened and don’t care good night

So either I put him in jail and you have the tea or you just run your mouth to be relevant. I’m so sick of your sorry ass.

Poke the bear and run. You should have never even mentioned this on the internet but you needed clout for Shen’s army right. Well I got time tonight.

I checked online and could find no record of Bar’s arrest, but it could just be that his booking was so recent that online records haven’t updated to include it yet. I will keep checking and update when we know more.