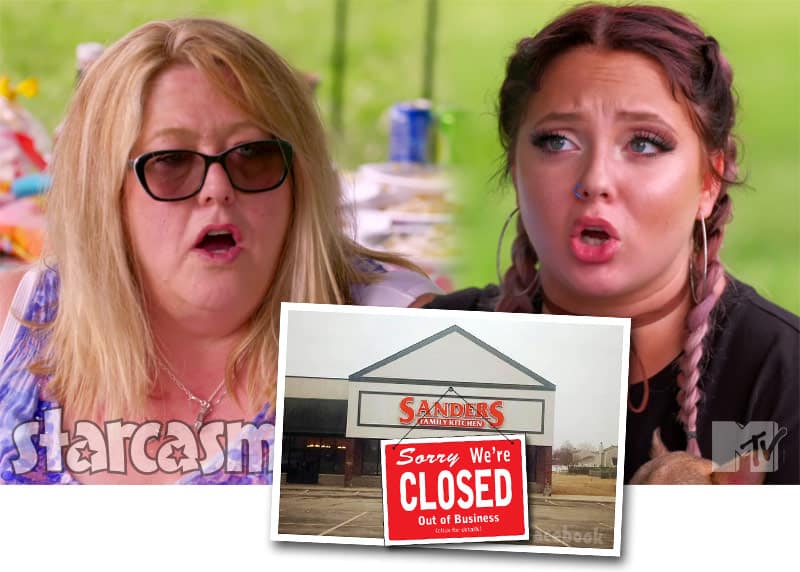 In mid-March, Teen Mom 2 star Jade Cline’s family opened a restaurant in Greenwood, Indiana. At first, and things seemed to be going extremely well; the initial crowds forced the restaurant to close early because they were running out of food. But Jade’s grandma Lori and step-grandpa Chris announced on Friday that the restaurant was closing its doors for good due to “several factors out of our control.”

Here is the full statement, as posted on the Sanders Family Kitchen Facebook page:

We are very sorry for any confusion or inconvenience for the last two days. After much reflection and deliberation we have decided to close the doors.

Unfortunately, several factors out of our control have forced our hand.
We greatly appreciated all of your support. We have been blessed to have served this community.

Chris later returned to offer up at least a glimmer of hope. “P.S. Everyone, thank you all so much,” he wrote. “We are still considering all our options. Trying to wrap our heads around the current issues. If anything starts to look up. We will post here. Thanks, Chris.”

I thought perhaps the recent arrests of Jade’s mom Christy and stepdad Michael might have played a role in the closing, especially given that the restaurant was posting just two weeks ago that they were hiring “all positions.” But it sounds as though this was a financial issue. A series of commenters asked what the reason was for closing their doors, and the only response from the page was simply: “High overhead.”

Jade first announced her grandparents’ plan to open the restaurant back in early January. “My grandma and papaw are the owners and staff is me, Sean, and our whole immediate family!” she revealed at the time.

Jade often worked as the restaurant’s hostess. And Sean apparently continued to work there even after his seemingly permanent split from Jade. Check out Sean’s feel-good post from two weeks ago about a young fan making the trip to wish Jade a happy birthday:

This is pic is Dope, here is why… ..This young woman @ofcourse_elin , her Mother & two younger siblings , drove 3 plus hours to come to @sandersfamilykitchen to wish Jade a happy birthday and present her with a gift . We are so honored and blessed to have fans like this. Without you guys & ALL YOU OTHER FANS out there, we simply wouldnt have a show. So we thank you , from our Family to yours . 🙏🤟❤ Big thanks to ALL of our fans !!! We love you all!

I am guessing that the restaurant will be a big part of Jade’s story line when she makes her Teen Mom 2 debut as Jenelle Eason’s replacement in the upcoming season, so perhaps we will learn more about why they were not able to make it despite seeming to pull in a lot of customers. Stay tuned!

Thank you everyone for the kind words and suggestions. We are opening Tuesday and relaunching a smaller menu. Staff pending, we will hopefully offer full service. We will at the very least offer lunches and homestyles via carry out. Watch for future updates.

Sorry will likely not be open for breakfast again for some time.

UPDATE – Jade Cline has confirmed that the restaurant is currently open, and she calls out her grandparents for posting fake news: 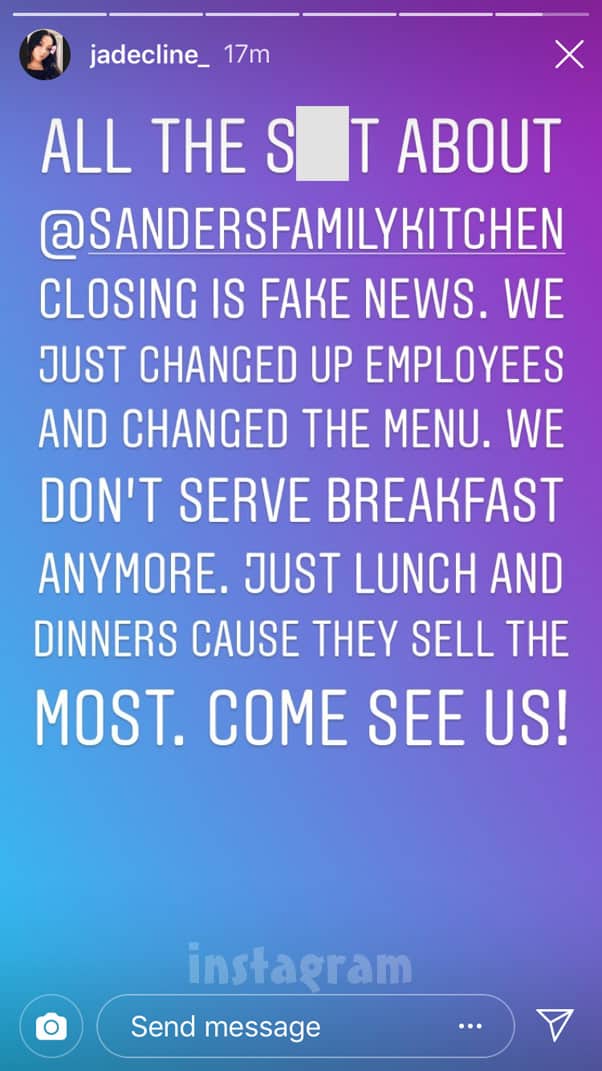