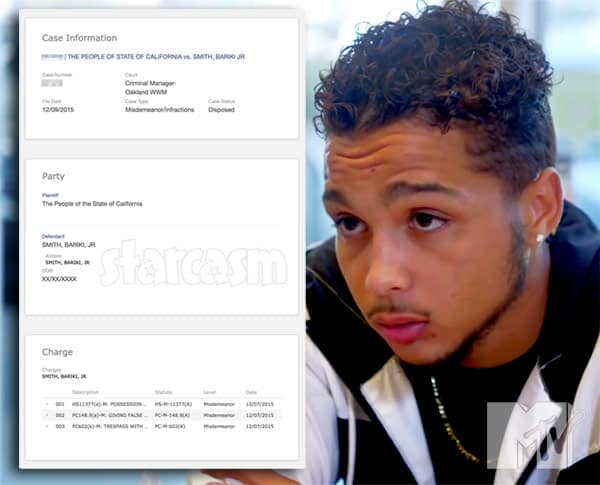 On the inaugural season of Teen Mom Young and Pregnant, dad Bariki “Bar” Smith finds himself in jail after an altercation with not-yet-fiancée Ashley Jones’ mom and stepdad, but it wasn’t the 21-year-old reality star’s first time behind bars. Three years ago, Bar was arrested and charged with meth possession, providing false information to a police officer, and trespassing.

The arrest happened in December of 2015, and according to online records, Bar pleaded not guilty to all three misdemeanor counts. Two of the counts — meth possession and providing false information to police — were dismissed in March of 2016, but Bar received a deferred judgment on the trespassing charge.

He was ordered to stay at least 100 yards from the Children’s Hospital in Oakland, where it is believed he trespassed, unless medically necessary. A deferred entry of judgment was granted for six months if no new arrests. He was also placed on three years probation.

The three-year-probation sentence is interesting because that would mean Bar was on probation while filming Teen Mom Young and Pregnant. It’s unclear if that was actually the case, or if he had his probation lifted before filming began. I assume MTV was aware of the arrest either way when casting him and Ashley for the show.

Meanwhile, Bar’s brother Troy Seales is still fighting for an appeal after he was convicted of murder last month. According to Troy and Bar’s mom Shen, things are looking good as far as a potential new trial. We will update if we hear anything definite.

Shen has set up a GoFundMe campaign to raise money for her son’s defense, and she is even offering t-shirts for sale to help raise money. Just click the link for the GoFundMe, and here’s a tweet from Shen with all the t-shirt deets:

The final product is here yay call 7029373901 or email Shenandoahwilliams2015@gmail.com please support us in this fight against injustice. All proceeds go to legal fees and his children. pic.twitter.com/OjARdP5u1I