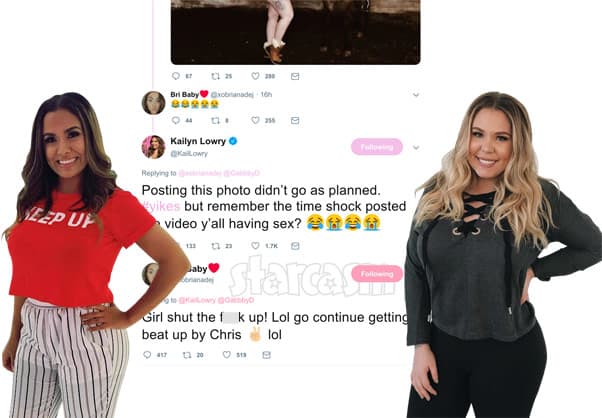 The Big Bang for the most recent Pettypalooza was @GabbbyD tweeting the now infamous maternity photo of pregnant Kail wearing only a pair of boots as she posed with a horse while vacationing in Iceland. “No mam,” she captioned the image.

Prior to @GabbbyD’s tweet, Briana’s Twitter account had shared a clickbait link to an article about Kail’s mare-as-you-dare picture, but she would later reveal that the first time that she personally saw the photo was @GabbbyD’s post.

Briana replied to the photo and @GabbbyD’s comment with this string of four laughing and crying emoji: ????

Kail got a bit defensive about Briana’s choice of emoji, and she replied in a way that escalated things VERY quickly. “Posting this photo didn’t go as planned,” Kail humbly admits, adding the #yikes hash tag. “But remember the time shock posted the video [of] y’all having sex? ????” (I will include details about what Kail is referencing below.)

Briana responded to Kail’s tasteless retort with one of her own as she referenced allegations that Chris Lopez, the father of Kail’s unborn baby and son Lux, has physically abused Kail. “Girl shut the f**k up!” Briana tweeted. “Lol go continue getting beat up by Chris ✌? lol.”

Kail’s gal pal Bone Estrada entered the fray at this point as she turned a blind eye to Kail making fun of victims of revenge p0rn to call out MTV for letting Briana “make light” of domestic violence. “So your cast members are allowed to make light of domestic violence?” Bone asked in response to Briana’s tweet. “Guess @mtv supports domestic violence! Let it be known! @TeenMom”

Bone then rapidly descended from her high road in defense of domestic violence victims as she appeared to threaten Briana with occupational violence at the next Teen Mom 2 Reunion. “The only one getting their ass beat is you,” Bone wrote. “See you at the next reunion??”

“U guys are friends again?” Briana asked Bone. “That’s cool for protecting her! But you know we won’t cross paths not after what happened at the last reunion lol we won’t be on the same floor, let alone building—not even on the same day! Enjoy the rest of ur day bone ?”

A Twitter user pointed out that staying at different hotels doesn’t necessarily mean that the two ladies can’t come to blows. “But y’all can arrange to meet up ?,” the helpful Twitter user suggested.

Briana didn’t seem to be completely averse to a confrontation. “I always stay at the dream in midtown so ✌?✌?✌?✌?✌?,” she tweeted.”

UPDATE @_BriBabyx3 says Kail is not the reason she is not attending the #TeenMom2 Reunion, @KailLowry says she's not going because the cast members are not being treated the same. (Scroll to the bottom for the latest) https://t.co/00IEFWl9Bn

The talk about a potential Teen Mom 2 Reunion Thunderdome on the streets of New York City was followed by Briana seemingly referencing Javi, before denying the Javi reference, and then actually referencing Javi: 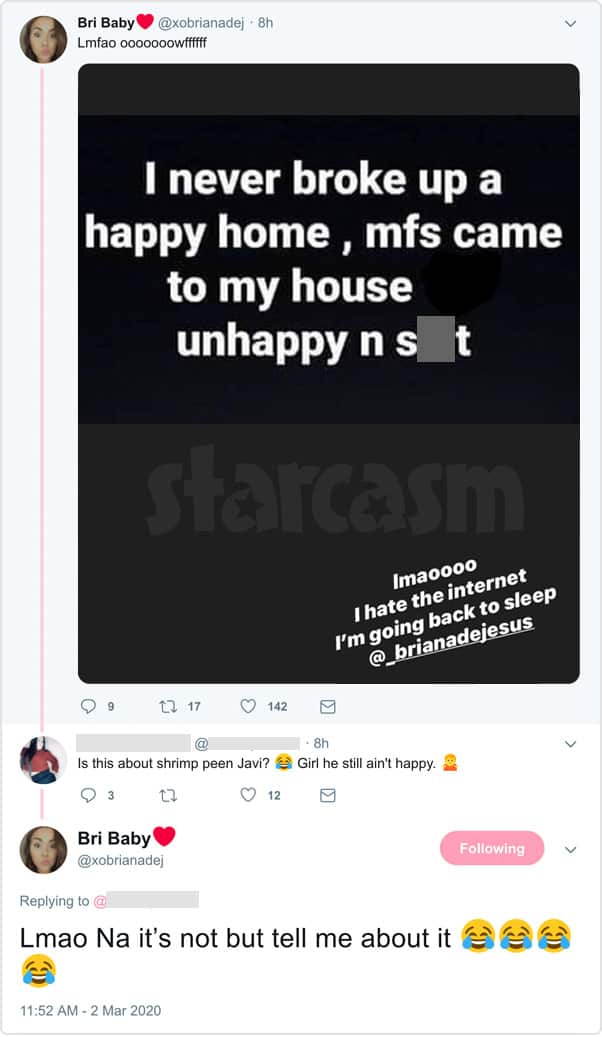 Briana tried to do a bit of damage control as she admitted that she though Kail’s maternity photo was “cute” and that her laughing emoji were in response to her friend’s reaction to the image. Another Twitter user tried to point out to Briana that downplaying domestic violence was not the appropriate response. Briana seemed unmoved: 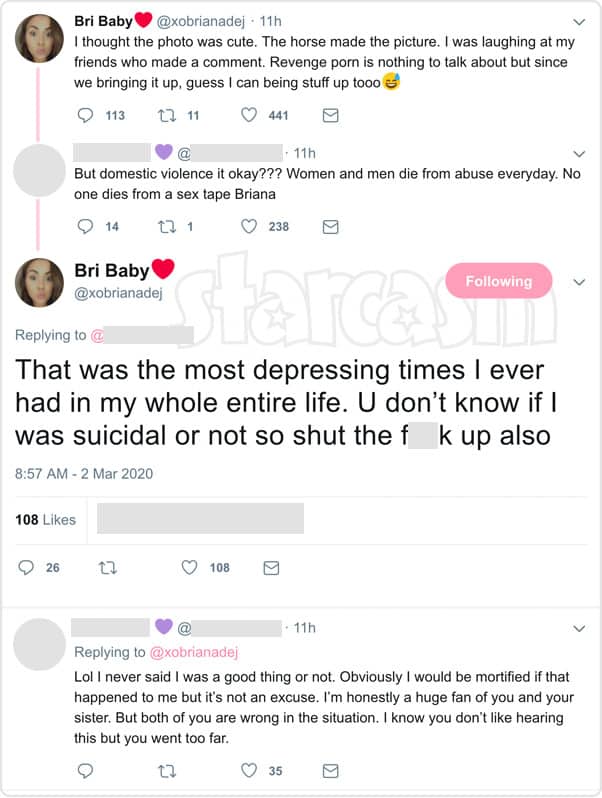 Kail shared a couple tweets that could easily apply to her and Briana, but my guess is that wasn’t Kail’s intention. “Trolls don’t even know they’re getting hits of dopamine when they attack other people online,” she wrote. She then tweeted the following in quotes followed by an exploding brain emoji: “They feel powerful when they make someone else feel pain.”

That is the end of the feuding at the time of this post.

For those of you who weren’t keeping up with Briana in the time between her appearances on Teen Mom 3 and Teen Mom 2, she was dating a guy named Shakiel “Shoc” Brown in late 2014 and early 2015. The two were actually a bit more than boyfriend and girlfriend as they were reportedly engaged for a while.

The couple broke up towards the end of February/beginning of March of 2018, and the break up DID NOT GO WELL. After reportedly trying to sell a sex tape of Briana to TMZ, Shoc began posting explicit photos and videos of her on various Instagram and Twitter accounts. (We were also contacted on March 3 by someone trying to sell Briana’s “leaked sex tape,” although the person did not claim to be Shoc. We responded that we were not interested and never heard back.)

Briana deleted her Twitter account at the time, but her mom Roxanne began a campaign to shame Shoc for “hacking” into Briana’s account and “stealing personal and private intimate moments” before then posting them online. Shoc, whose Twitter account ID @fukherfaceshoc might should have been a red flag, responded with his usual grace. “AINT NOBODY HACK SH!T,” he tweeted. “VIDEOS ALWAYS BEEN IN MY PHONE !!! GRANNY MUST WANNA SEE HER DAUGHTER SUK!N D*CK FROM THE BEGINNING.”

Shoc’s Twitter swagger was diminished later that month when he was arrested and charged with a felony count of video voyeurism. He was later found guilty of the third-degree felony in July of 2015.

His conviction did little to undo the damage done by his actions. “It’s never going away,” Briana said of the photos and videos posted by Shakiel, adding that her daughter Nova will someday be able to see them online when she grows older. “That’s probably the worst thing in the whole entire world,” she said.

Prior to his arrest for video voyeurism, Shoc had a rather extensive criminal record — including a burglary and drug possession arrest alongside Briana’s ex Devoin Austin in September of 2013.

After Briana and Kail’s feud reminded me (and everyone else) about Shoc, I decided to check in on him. It seems his felony conviction in 2015 did very little to change his charming ways that Briana found worthy of marriage there for a minute. Here are a list of some of his charges from two different Florida counties since the 2015 arrest. Please note that Shoc was not convicted of all of the charges listed:

Here is an excerpt from the December 29, 2019 police report that resulted in the last three charges listed above. It is the officer’s account of what Shoc’s girlfriend (I changed her name to Bridget) told him on the scene:

Bridget and Shakiel were arguing at approximately 0500 hours when Shakiel arrived home drunk. Bridget stated at one point in the argument he punched her in the face and pulled her hair, so she called 911. Bridget went to her bathroom to await law enforcement arrival. Bridget stated Shakiel walked into the bathroom carrying a large kitchen knife and told her not to say anything while pointing the knife at her. Bridget got a few missed calls from law enforcement so Shakiel told her to call law enforcement back to tell them that she was in an uber on her way to her grandmother’s house. After law enforcement left her home Shakiel laid on the couch and took a nap.

Bridget went through Shakiel’s phone to find that he had been texting another girl, so she woke him up to confront him. Shakiel’s phone broke during the second confrontation, and he attempted to find Bridget’s phone. She stated it was outside, so he told her to go get it, so when she went outside to look for it he tried to lock her out of the residence. Bridget pushed her way back in, and told him to go outside to get it himself. Once Shakiel walked outside she locked the door and called law enforcement again.

Bridget stated she is willing to testify and prosecute in court. Bridget and Shakiel have been living together for approximately 3 years, have one unnamed child together who was in DCF’s custody, and Bridget is 5 months pregnant with Shakiel’s second child. Due to Shakiel striking Bridget while having knowledge that she was pregnant, he is being charged with Aggravated Battery on a Pregnant Female. Additionally, due to Shakiel holding a knife to Bridget and not allowing her to call out or meet with deputies the first time she called, and taking her phone and not allowing her to speak to deputies via phone, he is also being charged with False Imprisonment with a Deadly Weapon and Hindering Communication to Law Enforcement.

Bridget’s story was jumpy. and had a few inconsistencies while she was speaking with me. Bridget initially did not mention a knife while the two were in the bathroom, and did not claim any kind of battery. Only after having her reiterate her story a few times did those two details come to light. Additionally, Bridget said she had an injury to her face which was in the form of a red mark, however admitted the red mark had disappeared prior to law enforcement’s arrival. Upon closer inspection of her face I was unable to see any visible injuries.

Bridget completed the Domestic Violence paperwork. Shakiel was secured in handcuffs and placed in the rear of my patrol vehicle. He was transported to BRC without incident.

If Teen Mom 3 had continued for multiple seasons, or if Briana had been added to Teen Mom 2 much sooner, I cannot imagine how much time I would have spent trying to keep up with reporting on this guy! Ugh.