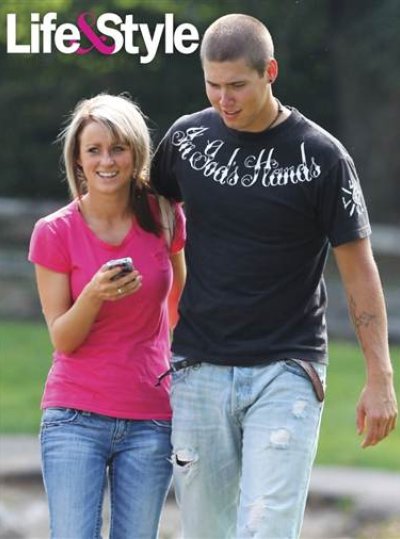 Hollybaby made a bold video accusing Teen Mom 2’s Leah Messer of dating four guys since her divorce from Corey Simms in April 2011, and introducing them all to her daughters Aleeah, and Aliannah. Hollybaby.com reporter Chloe Melas chatted with Relationship Expert Diana Falzone about Leah’s “slew” of boyfriends, and how horrible it was for her to introduce this conga line of guys into Aleeah and Aliannah’s life (citing potential “daddy issues.”) Is any of this true?

Leah tweeted in response to the video: “The video on holly baby is soo fake and poorly edited. Jeremy is the 2nd guy I’ve been with, and plan to stay with. :D”

Those are the only two guy’s Leah has dated since her relationship with Corey ended. The other two guys Holly Baby is referring two where actually based on erroneous information. Leah was linked to two Tylers in the tabloids, but both of those Tylers were dating women close to Leah, NOT Leah herself.

The first rumor was that Leah dated Corey’s friend Tyler Cruthers, when he was really her BFF Kayla’s boyfriend. She has also been accused of dating Tyler Blankenship, who dated her sister Victoria.

So there you go, her “slew” of guys are are really just two: one who already knew the girls and she dated briefly, and another who is a serious boyfriend.

We also received this statement from Leah based on the Holly Baby article: “They def should be a little more accurate about everything and monitor their out of control comments about my babygirl!” Leah is referring to some vicious comments about baby Ali being left by readers on the site.

UPDATE: A comment has been deleted below from someone impersonating Leah’s aunt who made untrue allegations. If you read the comment, please understand it’s been confirmed that those allegations were incorrect.