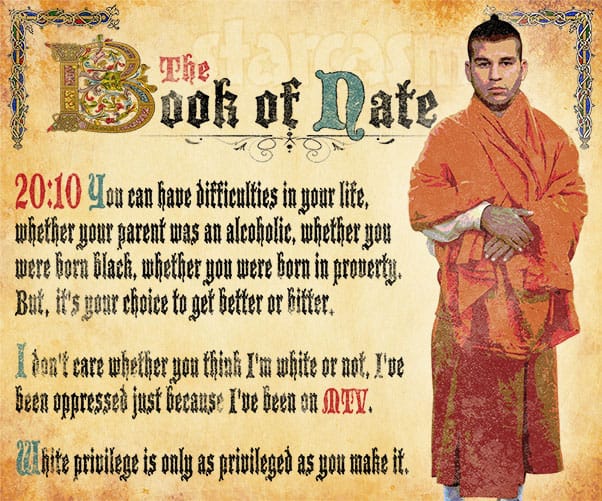 Former Teen Mom 2 dad Nathan Griffith continues to pursue his post-reality show career as an Instagram preacher, historian, philosopher and social scientist. In the latest installment of “The Book of Nate,” Jenelle’s ex reflects on racism in America today — or lack thereof — as he slurs through a motivational diatribe on overcoming “proverty” and “aversity” by choosing to be better rather than bitter.

“Hate. Discrimination. Bigotry,” Nathan dramatically begins the new video while sporting a sleeveless hoodie. “We’re all captive to everyone who’s pressing [sic] us as individual. One thing that I learned when I was younger is aversity [sic].”

[Editor’s note: I’m not going to notate the rest of Nate’s sermon in regards to his incorrect verbiage.]

Nathan then teases viewers that he is going to tell us a short story. After saying that he might be a green thumb (I think that’s what he says?), Nathan steps outside and starts talking about breaking something about a year ago. The video cuts off then picks up with hooded Nathan walking through the dark interior of his home and sitting back down.

Take it away Nate:

I come from a family of five. My mom maybe made $25,000 a year. I have a sister, a brother, another sister who passed those expectations of living in proverty to get better. And we think totally different because we were oppressed. And I don’t care whether you think I’m white or not, I’ve been oppressed just because I’ve been on MTV. And we choose to get better.

Nathan then tells a story about a cat that used to come to his door every day for about three years as an apparent metaphor for those receiving any sort of government assistance or other “hand out.” Nathan says that he left and the cat continued to come to the door expecting food, but there was none there. (I assume this is just a hypothetical story. Otherwise, how would Nathan know if the cat was showing up every day after he left?)

An excerpt from the cat tale:

One day I decided to leave. After three years of feeding this cat, it came to the same door. There was no food.

The next day, that cat came to the same door. There was no food.

And I will reiterate, the cat came to the door the next day. It had no food.

He later summarizes by stating that “if you continue to let someone feed you, you will not grow as an individual.”

#TeenMom2 Nathan Griffith was in court in FL today after a Sarasota woman filed a restraining order against him for alleged stalking & threats. Plus, Nathan says being poor is a choice in a recent Instagram rant about politics & economics. #TheBookOfNate https://t.co/wopUOaGdN4

Nathan defends himself against those who bring up white privilege in response to his preaching and philosophizing. “Someone called me out on this time and time again,” Nathan begins. “They said, ‘Oh, you don’t know what you’re talking about because your [you’re?] white privilege.'”

He pauses a moment in reflection. “Agree,” he concedes.

“Are there racist people out there? Yes. Is there a national racism? No. If you date my sister, regardless of the color of your skin, I don’t care. To some people, they might care.”

“The Book of Nate” chapter wraps up: “I hope you guys really take this to heart. I love you guys. And remember, you can be better or bitter. Aversity, just like my plant, is what makes you grow. And if you can’t handle aversity, then you are deciding to be weak.”

@tmmamadrama shared an excerpt of Nathan’s sermon on Instagram that included him talking about overcoming difficulties like being black or being born in proverty, and it got a response from Teen Mom: Young and Pregnant dad Bariki “Bar” Smith.

Bar was having none of it as he opted for bitter over better: “Dumb inbred a** boy 😭”

Prior to offering up his reflections on proverty, aversity, and white privilege, Nathan shared his thoughts on racism in America. The topic was a very serious one for Nate, as you can tell by the fact that he opted to actually wear a shirt with sleeves.

“Hey guys. I want to talk about a very, very hot topic right now. So, first all, there is no such thing as racist unless you make it a problem.”

Unfortunately, America has once again made it a problem. Fortunately, Nathan has a solution: just stop talking about it.

Back during ancient Rome and anywhere in the world, do you think they justify somebody by their skin color? They didn’t They were all Romans. They were all Englishmen, all Jamaicans, all Africa — Africans. Period.

So, if you do want to talk about race, let’s get the facts straight real quick. Back in the 1960s, 1970s, how many black men do you see dating white women? [Pauses.] It didn’t happen, OK? Because there was segregation. There was racism.

So let’s get the facts straight. Back in 1970, does anybody know who Susan Rosenbart [actual name Susan Rosenberg] is? She is actually one of the white people who fought for black people in the Black Liberation Army. Hum, that makes perfect sense — she got pardoned by Bill Clinton back in 2001. And now she’s a prominent donor to Black Life movement. That’s tricky. And now you want to talk about white people killing black people.

So, let’s break that down. If you have 100,000 citizens of the United States, 13,000 of those people are responsible for more than fifty percent of the murder cases. And if you want to unfollow me, if you want to say I’m being racist, I don’t care. Those are the facts.

I will fast forward a little bit to where Nathan brings up Martin Luther King, Jr. before literally suggesting that all the world’s problems with racism will go away if we just hold hands and sing “Kumbaya.”

Martin Luther King, he wanted this race sh*t to stop. And he set his foot down, and he was a strong, prominent leader.

I love everybody. I love my brothers. I love my sisters. So, if you wanna stand up for a cause, hold somebody’s hand and sing “Kumbaya,” because that’s the truth. There’s too much hate in this world, and stop being the problem. Because the people who are yelling and complaining about their feelings are the ones that are causing us the biggest problem right now.

#TeenMom2 Nathan Griffith says he asked @MTV to arrange an MMA match between him and @PBandJenelley_1's husband David Eason, David's estranged sister Jessica explains why their mom laughed at "f*gboy" text, plus A LOT more: https://t.co/iDg9wkaCEn

As you would imagine, the comments section was a bit lively, to say the least. And, of course, Nathan was in there essentially yelling and complaining about his feelings.

COMMENT: I’ve experienced racism MULTIPLE times throughout my life and I’m black. If racism didn’t exist, America wouldn’t be as chaotic as it is now. That’s great that you don’t see color, but just because you choose not to acknowledge it, doesn’t mean it doesn’t exist.

NATHAN: And I want to preach more about Americans than skin color. If more people loved, instead of spread violence to be heard… think what AMERICANS can accomplish. I stand by my words and thank you for not attacking me. Racism is real on all spectrums, but, I choose not to apart of it.

COMMENT: You’ve said some dumb sh*t but this is by far the dumbest.

NATHAN: Retrace that comment and listen to how that statement sounds. “You’ve said some dumb sh*t but this is by far the dumbest.” Even though it is proper… is that really how you talk? Then, you are calling me dumb?

UPDATE Jenelle's ex Nathan Griffith was found unconscious in a running vehicle in a grocery store parking lot, leading to his DWI arrest on Thursday. “Empty alcohol containers were found in the car." https://t.co/GYBSVpx0Nx

For those of you longing for more teachings from The Book of Nate, he has LOTS of videos on his Instagram. On September 25, he offered up his thoughts on sins like having sex and being gay.

On August 30, Nathan talked about two of his favorite things — history and Christianity — as he delved into some of the missing books from the Bible. His favorite is the “Book of Enoch,” which he says this about:

The first book talks about demonology and angels, and pretty much talks about why Jesus wanted to flood the world. OK? And the second book talks about science and cosmetology. And the third birk — book talks what they’re rediscovering right now is about marriage murels — morals, and everything else that goes along with that. 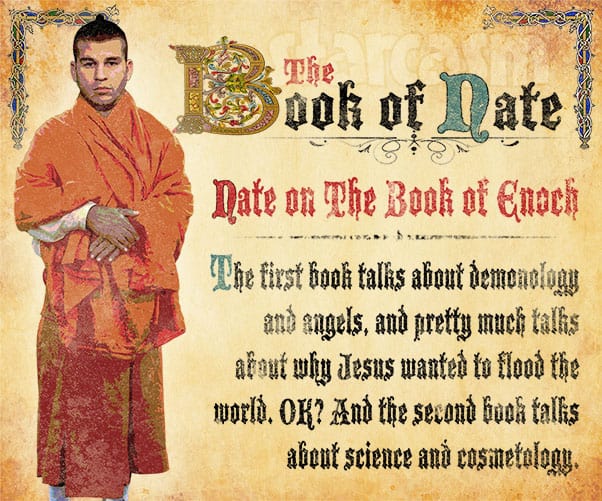 I’ll leave you with that video below. For the rest, you’ll have to head over to his Instagram account.

UPDATE – Nathan has since offered up his take on Jenelle’s son Jace, and he isn’t holding hands and singing “Kumbaya.” Here’s a tweet from The Ashley with a link to her recap: