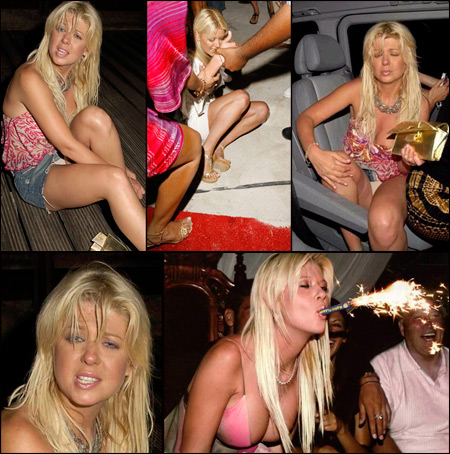 Tara Reid is an honorary member of our Alcohall of Fame and if the latest reports of the party-girl’s hardcore ways turn out to be true than I move to make Miss Reid President!

The fine folks with the tabloid publication In Touch Weekly ran with the following gem of a Tara Reid being Tara Reid anecdote.  A ‘source’ stated that the 35-year-old actress was doing what she does at an Oasis Beach Club (how randomly wonderful is that generic name) when her front tooth couldn’t handle it anymore and decided to go back to the hotel and sober up.  I bet it can be difficult being Tara’s teeth but they’ve got nothing on girl’s liver (zing)!

Well Tara was unfazed by the incisor rebellion and went scourging on the floor of da’ club to retrieve it.  At this point I can see a couple of Oasis broseph regulars eyeballing Reid on the dance floor hunting down her teefies thinking, “If I don’t do better by 2 AM that’s my target.”  Anywho, Reid found said tooth, whipped out some adhesive liquid, stuck that bad mother right back where it belongs and went on with her partyin’!

That this story is even conceivable is not good for Tara but even with her rep the idea that she just so happened to have some glue handy has me questioning the validity of the source.  It very well could have been a cap and not like a whole tooth but that’s still gross!

VIDEO – Bruce Willis has been inspired by Lady Gaga