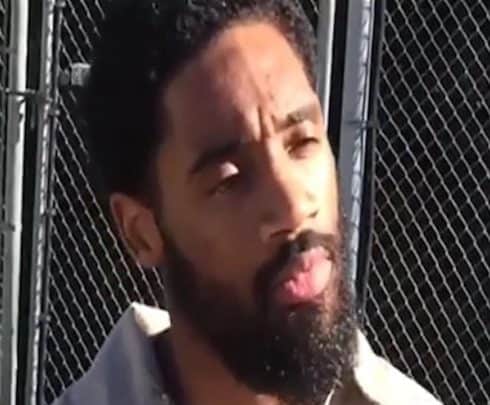 Imprisoned Love & Hip Hop Atlanta star Scrapp Deleon has been the subject of many release rumors over the past couple of years. The most recent came just a few months back, after photos of Scrapp with some of his LHHATL cast mates made the social media rounds. However, as Starcasm was the first to report, the news of Scrapp Deleon free was a bit premature: it turns out that Scrapp currently lives in a Macon GA halfway house, but could get early parole.

So, while Scrapp isn’t technically a free man just yet, he’s definitely a lot closer to freedom than he was at this time last year. In fact, it looks like Scrapp is going to be a part of the LHHATL Season 8 cast when the show returns this spring! The first behind-the-scenes pics from the Season 8 set have leaked online, and one of them allegedly shows Scrapp in front of the camera filming for the opening credits:

#BTS Scrapp filming opener for the new season of Love and Hip Hop Atlanta! It looks like he may be in the opening credits ??? #LHHATL pic.twitter.com/s7LQfKlCbr

In related news, Scrapp recently cleared his entire Instagram profile, keeping only one of the first messages he sent to his fans after beginning his prison sentence. As of this writing, the only other post on Scrapp’s IG profile is a clip from a video he shot from what looks like the yard of the prison where he was until very recently doing time.

According to Scrapp’s caption, he’s shopping the full clip around as an audition tape. It looks like Scrapp Deleon free means big moves are in the works:

One thing we’re still trying to find out is whether Scrapp Deleon free means LHHATL fans should expect to see Tommie on the new season after all. She and Scrapp were photographed kissing passionately on the streets of Macon a few weeks back, leading to gossip that they were back together. But Tommie’s currently facing 50 years on child abuse and stalking charges, and her own legal battles are a long way from over.

Love & Hip Hop Atlanta Season 8 is rumored to be set for a March 25th return. We’ll keep you posted with a cast update when we know more.