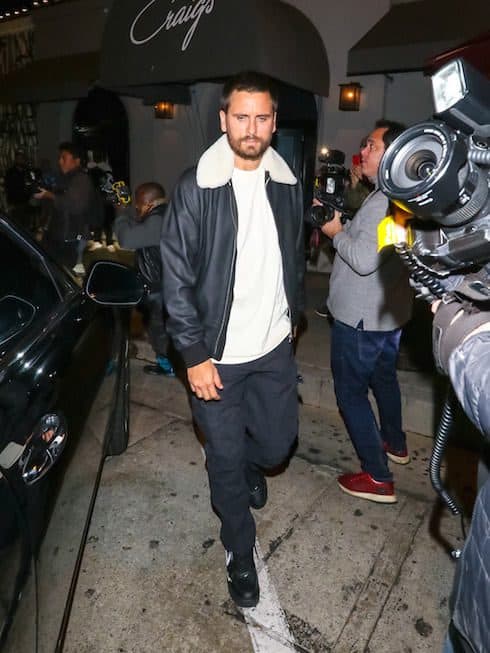 Maybe it’s the usual post-Thanksgiving gossip lull; maybe it’s Keeping Up With The Kardashians‘ still-dwindling ratings. Whatever the reason, over the last few days, a surprising number of new tabloid articles claiming Scott Disick is sleeping with at least two of the Kardashian sisters has appeared.

Lest you think that that’s no big deal, let us remind you that you only *think* Scott is still with Kourtney (because it really does feel like they never really broke up). In some ways it’s easier to believe that Scott and Kourtney remain a couple than it is to believe Scott Disick and Sofia Richie are still together. But Scott and Sofia have been together for fourteen months! That’s six percent of Sofia’s entire life! Could you date Scott Disick for six percent of your life?

Anyway — rumors about Scott and Kendall Jenner getting together have persisted, on and off, for quite awhile now, so it maybe shouldn’t be surprising that there’s gossip about Scott and Kendall’s half-sisters. And the first one is a fun enough twist on the old “Scott cheated on Kourtney” formula. Apparently, Sofia is worried that Scott might be “dumb enough” to cheat on her…with Kourtney Kardashian.

“Sofia puts on a brave face in public,” says the first insider. But that’s just a ruse: “She seems jealous as hell about Scott and Kourtney recently,” and “heavily suspects that Scott and Kourt have been sleeping together.”

The insider went on to claim that Scott merely “rolled his eyes” when Sofia confronted him about her fears, and further said that Scott “really takes [Sofia] for granted.” But if the piece is intended to be a warning shot to Scott from Sofia’s people, it sure ends on an unusual note: Sofia is “still under [Scott’s] spell,” such as it is.

The second bit of gossip — and the loopier one — supposes an alternate universe-worthy scenario in which it’s Scott and Khloe Kardashian who’ve been hooking up behind Sofia’s back (and Kourtney’s). Though Gossip Cop has already put the idea through the wringer, the truth is secondary to the reason the story was planted in the first place. And this one is too goofy not to bring up at least briefly.

It seems someone wants the world to think that Scott Disick had a “shocking,” “months”-long affair with Khloe, one that mostly involved “quietly hooking up for months” and eventually graduated to “romantic lunch” in public. The article’s linchpin is that Khloe was so distraught over her baby daddy Tristan Thompson’s own cheating scandal that she turned to Disick for comfort, as one does. And “things went from there,” as they so often do.

It’s worth pointing out that the “Distraught Kourtney turns to a fresh bed for comfort” card has already been played. She was supposed to have cheated with her old boyfriend French Montana not long after giving birth to True, partly because she needed comfort and partly because she wanted revenge. That story seemed strained at the time; this one about Khloe and Scott is just about too much.

Still, it’s worth wondering why two stories about Scott Disick cheating with two different women made their way into notable tabloids within the same gossip cycle. Neither Scott nor Kourtney nor Khloe have any new products to push beyond their usual Instagram plugs. KUWTK is nearing the end of its fifteenth season, but has a few weeks to go before the season finale. It’s at least possible that Sofia’s people planted the stories to drum up sympathy for her, in light of some drama between herself and Scott that we haven’t found out about yet.

On that note, it’s also possible that Scott — who, while drunk in the past, has allegedly bragged about sleeping with every Kardashian sister except Kim — was intoxicated or bored and looking for something to do, and so he decided on this. And the most likely culprit may well be Lionel Richie, who’s had fourteen months to plot the breakup of Scott and Lionel’s youngest child. If so, let’s hope this is just the opening salvo and that Skeet has something bigger planned.