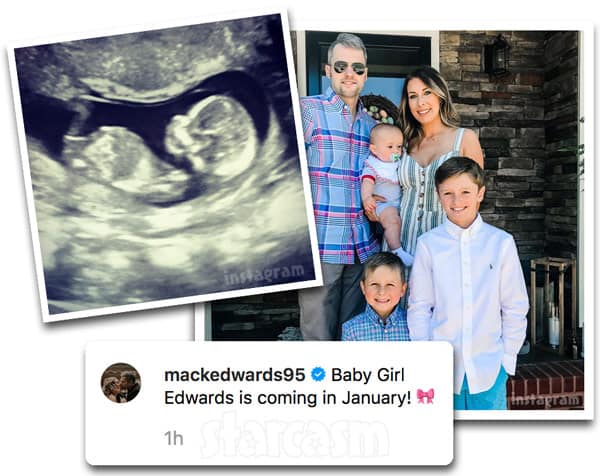 It has been a crazy week for Teen Mom headlines! Jenelle Eason regained custody of her children, Gary Shirley became a police officer, Amber Portwood was arrested again, and now Mackenzie Edwards has announced she is currently pregnant with a baby girl!

Mackenzie’s news came via Instagram where she posted a photo of her sonogram and captioned it by writing: “Baby Girl Edwards is coming in January! ?”

It’s not difficult to do the math and realize that a due date in January, 2020 means that Mackenzie must have conceived almost immediately after Ryan was released from jail on April 15.

The girl will be the first for both Ryan and Mackenzie, who share three boys between them: Ryan’s 10-year-old son Bentley, Mackenzie’s 4- or 5-year-old son Hudson, and infant son Jagger born in October.

Prior to disabling comments on the post, Mackenzie responded to a someone who suggested that Ryan’s mother Jen would be “over the moon” to be getting her first granddaughter by writing: “That’s a major understatement.”

Clearly, Ryan has had his fair share of difficulties over the past decade, but we continue to wish him and his family the best, and we look forward to meeting their little girl. 🙂

Farrah Abraham explains why Mitt Romney was the better choice