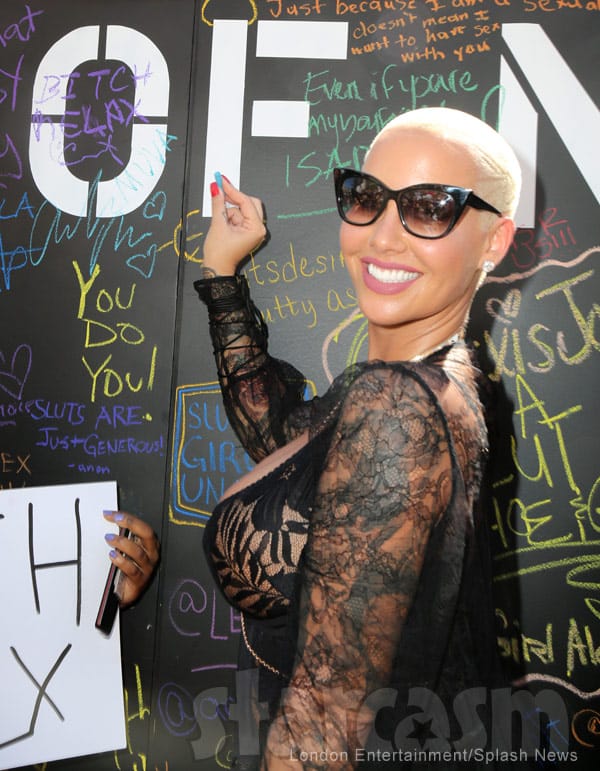 Amber Rose is clapping back at Benzino, who took to Instagram in a tirade about her 2nd annual SlutWalk and all that he thinks it embodies. While the former Love & Hip Hop Atlanta star went off about how glad he was that his 19-year old daughter did not attend, Amber was quick to point out that she felt he was totally missing the point.

The Shade Room caught the whole social media transaction in which Benzino ranted about how glad he was that his own daughter opted not to take part in an event like the SlutWalk and how “young girls need guidance.” He continued on about the direction society was headed, and he ended the rant with a comment on how he was starting to “hate this industry!!!!” The extra exclamation points are assumed to let us all know just how much he hates it.

When Benzino dropped his hate bomb on Amber Rose, she was busy at the event, which had a pretty spectacular turnout. It didn’t take long for Amber to catch wind of the SlutWalk critique, though, and she did respond rather calmly, especially considering how much this movement means to her.

Then, Amber Rose suggested that Benzino does a little research about the mission of the SlutWalk and everything it is about by checking out her website. Once there, he and others would see the following mission statement:

To deliver a flawlessly executed event geared toward raising awareness about sexual injustice and gender inequality. The Amber Rose SlutWalk aims to impact and uplift while shifting the paradigm of rape culture. The event provides a safe, all-inclusive space to entertain, educate and empower.

The irony of Benzino’s rant is that it slut shamed the SlutWalk, and he probably didn’t even realize what he was doing. To add insult to injury, Zino has added another rant about the event in response to Amber’s clap back. In a video uploaded to Instagram, he talked about the actual history of the SlutWalk (according to him), and then said that Amber’s version was about the glorification of promiscuity.

“This has nothing to do with rape,” Benzino says in the clip. “This is basically embracing that ‘Oh, well, it’s okay for me to sleep with 1000 men and should be held to the same standard that men are.’ Y’all are buggin’! And real talk, I got a daughter and she not falling for it. So I could give a f**k about how any of y’all think about what I’m saying because that’s y’all and that’s y’all’s daughters. But mines ain’t going for it.”

As long as I'm breathing, these 4 will never have fake role models to look up to or to be influenced by foolish people, they will never be confused to what's real or not. I know what ever they accomplish in life that I will be 50 percent of the reason, by any mean am I trying to take full credit for all that is good about them because it takes 2 to make a child but I'm very proud to be their father!!! I feel bad for those who have no real guidance from their parents for what ever reason, but these 4 will never have to worry about that. ?❤️❤️❤️❤️

The video seems to have been removed from Benzino’s Instagram, but TSR did manage to grab a copy of it. Instead, a few replacement posts have been made, with one of them being a meme about being honest. Another was a collage of all of Benzino’s kids and him stating how proud he is to be their dad.

It looks like Benzino’s SlutWalk beef may have been about more than just his thoughts on what it represents. It turns out that his ex-fiance Althea Heart was at the Los Angeles event, and she brought baby Zino with her. Althea posed for pictures with her baby on the SlutWalk red carpet and was also seen twerking along as Trina performed. Was Benzino taking shots at SlutWalk because he was upset that Althea showed up?

#PressPlay : So this must be why #Benzino was mad & went in on #AmberRoseSlutWalk in his #PostAndDelete earlier ?? Meanwhile #Althea & their son were there having fun? View earlier posts

What do you think of all the shade Benzino threw at Amber Rose and her 2nd annual SlutWalk? Was he really glad his daughter didn’t go or was he mad that Althea took their son? Or was it both?