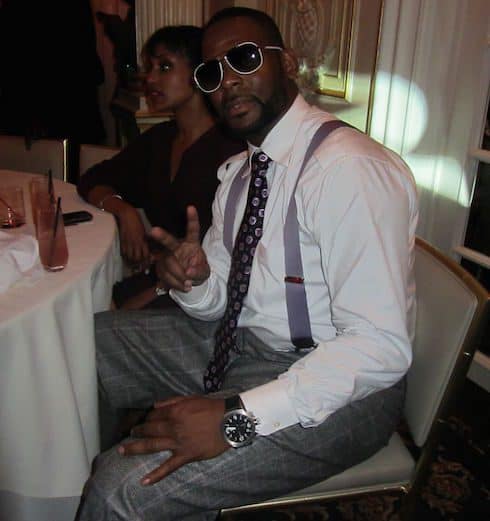 Thanks in part to the ratings success of Lifetime’s “Surviving R. Kelly” documentary, the R. Kelly underage sex and sex cult allegations are receiving new scrutiny. Just as that film premiered, Demetrius Smith, R. Kelly’s former tour manager, gave an interview to The Domenick Nati Show in which he appeared to confirm some of those allegations, while adding several more of his own.

It sounds like Smith confirms that R. Kelly used to sleep with underage girls

Demetrius Smith was R. Kelly’s tour manager from 1985 to 1995 — in other words, from the very beginning of his career up through Kelly’s first mainstream success and first Grammy nominations (for writing and producing Michael Jackson’s hit “You Are Not Alone”).

There’s a bit of overlap between Smith’s tenure and R. Kelly’s most infamous relationship, between himself and the teenaged Aaliyah: Smith was still working with R. Kelly after Kelly was introduced to Aaliyah in the early 90s, and was his tour manager until around the time Kelly and Aaliyah’s marriage was annulled.

Smith says he’s “never seen” evidence of a sexual relationship between R. Kelly and Aaliyah. But he does say that R. Kelly was “very private” in all his relationships, and suggests that the singer had relationships with underage girls who were nonetheless old enough to be out all night and have their parents “not miss” them.

Here’s the full interview, followed by a transcript of some of Smith’s comments on R. Kelly’s alleged sexual activity with minors:

“Robert’s that way with a lot of his girls,” Smith explains. “He don’t want nobody around. And the girls go along with that. If he says ‘Stay in your room for the night,’ that’s what they do. And that’s a grown woman. And even if they’re fifteen, sixteen, whose parents would not miss their children. We didn’t look at the girls like that [as girls]. Because they weren’t kids. They were young adults. Back in those days, we didn’t look at their ages. I mean, you could stay out all night, and, if you’re fifteen, wow.”

It’s been a couple of summers since the stories of R. Kelly brainwashing young women into a sex cult got mainstream attention, and the topic has died down somewhat. Smith gave a flat “No” when asked if R. Kelly was involved with a sex cult — but he explained the attraction Kelly’s groupies had for him and Kelly’s “manipulative” ways regarding them in terms that sure do sound culty.

From Smith’s interview above:

Here’s a guy that has money, that is just…got girls that, they’re young, man. They’re young and he keeps ’em private. And he might have one in this room, one in that room, one in that room, he’d say, ‘Y’all, I’ll be back, when I get home, pick up the phone, get you somethin’ to eat.’ Can they come out and go hang out?…No. They didn’t do that. Because if they did, he’d send them home.

“The younger girls were the ones [R. Kelly] could control,” Smith went on. “The older women, he couldn’t control. And those that he could control, he would control. He can manipulate. He’s learned to do that.”

R. Kelly apparently got plenty of attention from men, as well

Finally, Smith addressed the rumors of Kelly keeping men on the side as well as women, acknowledging it was something that happened during his time working with the singer. Back then, says Smith, R. Kelly “got guys” waiting around for him all day in the same way that Kelly kept women.

“He got some freaky ways,” Smith said, adding that R. Kelly “showed his ass to me.” When pressed for more details, Smith claims that literally, one night “in the early 90s” when Smith and Kelly shared connecting hotel rooms, Kelly entered Smith’s room “bare-ass naked,” bent over in front of a full-length mirror, and told his manager “You know you want some of this.”

Smith “turned [Kelly] down,” and told him he thought the singer was “playin” — but Kelly said he wasn’t.

The Domenick Nati Show is available for streaming on YouTube. You can stream “Surviving R. Kelly” here, via Lifetime.

One sip of alcohol could land Lindsay Lohan in jail