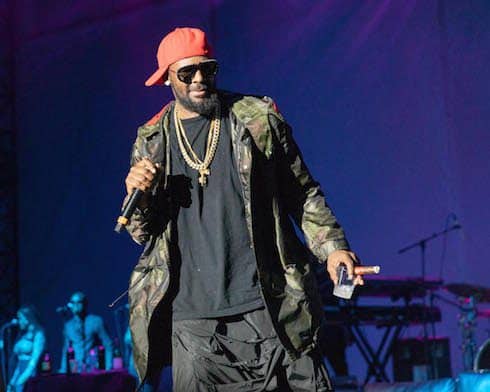 R. Kelly just dropped a new song called — wait for it — “I Admit.” The 19-minute track is addressed to all the haters and naysayers who’ve come forward with sexual assault, brainwashing, and sex cult allegations against him over the last few years. And Kelly uses the song’s eight extended verses to admit his guilt…just not in the way you might expect.

But before we get to the R. Kelly I Admit full lyrics and explanation, we should first point out that it’s pretty clever of Kelly to go full avalanche and bring up pretty much every controversial thing that’s happened to him in one gigantic track. “I Admit” is the Ulysses of defiant rap: it’s unlikely that too many people are going to listen to the whole thing, but it’s impossible *not* to have an opinion on it.

So, in case you want to better inform yourself, here’s “I Admit” in full:

Of course, Kelly doesn’t drop all the controversial stuff right away (aside from the song’s provocative title). He starts off generally, just talking about making some “mistakes” and being “imperfect” and how he’s “a gift and a curse” and anyway. there are plenty of “fake” people around him.

This back-and-forth dominates the entirety of “I Admit,” but especially the first verse. Via Genius:

Several minutes later, in the song’s fifth verse, Kelly addresses specifically the allegations of pedophilia and sexual assault made against him over the last few years. Once again, though, Kelly mostly dances around the allegations, calling himself “a freak” and acknowledging he “f*ck[s] with…both older and young ladies” before claiming that the charges themselves are only “opinions” for which he shouldn’t be expected to go to jail.

Here’s that verse in full:

I admit, I admit, I’m a freak (freak)
Used to go to strip clubs every week
But who these n!ggas tryna say I am, man I’m loud and I put that on chief
I admit I f*ck with all the ladies, that’s both older and young ladies (ladies, yeah)
But tell me how they call it pedophile because that shit is crazy (crazy)
You may have your opinions, entitled to your opinions (opinions)
But really am I supposed to go to jail or lose my career because of your opinion
Yeah, go ahead and stone me, point your finger at me (stone me, yeah, yeah)
Turn the world against me, but only god can mute me (against me, mute me)

And if you were wondering whether R. Kelly brings up the brainwashing and cult-harboring stories about him from this time last year, you’re in luck. A couple of verses later, Kelly asks “What’s the definition of a cult? / Whats the definition of a sex slave? /Go to the dictionary, look it up /Let me know I’ll be here waiting.”

This doesn’t seem like the smartest defense he could have come up with, since those terms are both easily defined and applied to Kelly’s specific situation; “Look up ‘allegation'” might have made more sense. But, as Consequence of Sound noted, Kelly also notes that he was sexually abused by a family member at the age of 14.

In all, “I Admit” features plenty of frank declarations that sound like they could be incriminating — along with just as many coy evasions and sidesteps. If you already believe R. Kelly is guilty of some or all of the accusations against him, you’re likely to find plenty to be outraged by in “I Admit”; if you don’t believe a word of the claims, you probably really like the song.

And, if you’re just here for the drama, there’s always Twitter.