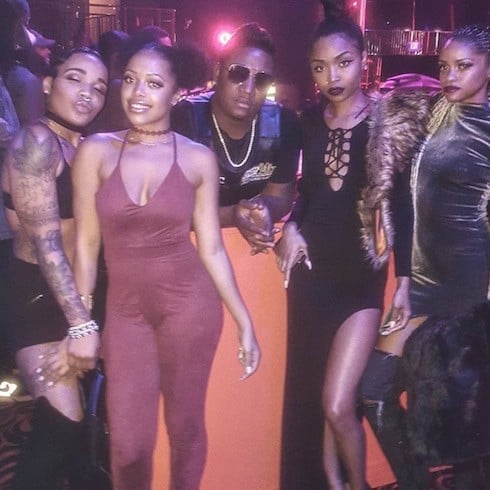 Young Joc and Karlie Redd are back together on this season of Love & Hip Hop Atlanta, and speculation is rampant as to whether this time they can make it work. But their relationship reboot is also bringing attention back to the super-extended family Young Joc has sired.

In the words of Sina Bina, Young Joc’s fourth and final baby mama (so far), “Joc has a habit of cheating [that] I don’t think he’s ever gonna break.” That cheating has resulted in a rather extensive list of Young Joc kids and baby mamas, which Sina was kind enough to break down for VH1’s cameras.

According to Sina, the family tree looks like this:

-Fatimah, Joc’s first baby mama, dated Joc as a teenager, and they have a 15-year-old.

-Alex is the second baby mama; she and Joc were married and had several children together, but separated approximately ten years ago.

-Sina is Joc’s fourth baby mama, but the two of them got together before baby mama #3 while both going through bad breakups at the same time. Sina had already been good friends with Joc, and calls their relationship a “situationship.” Also, the two of them lived together with Fatima for awhile because Joc wanted to be close to his son. (And because he has, in Sina’s words, “a big huge house”–so presumably there was enough room for everyone to keep their distance if things got heated?)

-Carla is the third baby mama chronologically, though she came into the picture last. Joc met her while she was waitressing in a nearby restaurant and he stopped by one night to pick up dinner. Then, shortly after they met, “Joc invited ‘the waitress’ to the house” while Sina was out of town–and Carla “was pregnant within two weeks.” She wound up having twins.

Four months after his fling with Carla, Joc got Sina pregnant — also with twins. In Sina’s own words: “That was like–you have to be f*cking kidding me.” Until she found out it was twins with which she was pregnant, Sina intended to have an abortion.

So, Joc’s youngest children are he and Sina’s twin daughters Eden and Allon…

I just want to say thank you God and wish a Happy Bday to My Beautiful Daughters #EDEN&ALLON #thankugod? oh an thanks @mssinabina lol

…and his oldest child is Amoni, the son he had with Fatima. (Amir is one of of Joc’s children with Alex.)

Looking Amoni in his eye while teaching him about manhood.. Look at how Intrigued Amir looks in this pic….. The passion of a Father and his sons

Joc’s twins with Carla are fraternal–the couple wound up with a boy and a girl:

#Twinnin……….. Good Morning out there

Call me Ugly all day long but you cant call my kids that!! Lol….. #proudfather

It sure seems like all the kids get to spend time with each other–and have a crazy time at that!

But I think they forgot Who they get the cray gene from!!!!!!! Part. 2 #thesetup

Finally, it seems Sina and Joc are still the closest pair out of all the Young Joc kids and baby mamas. She dropped him an honest, heartfelt, and ultimately sweet birthday note last year:

Jasiel Robinson, maaaannnn have we been through some shit in these last few years! 10 years of friendship and 2 kids later you're still my guy! You're my personal comedian and storyteller but can get on my damn nerves faster than anyone I know! ? but that's because we are just alike and sometimes we just don't see eye to eye and that's ok but I wouldn't trade you for the world… Even if we are not in a good place like we sometimes are, I know We can always count on each other and that means more to me than anything… Your so talented and a great Dad and one of my best friends… People judge you all the time and your strength is unbelievable ????… You may not be everyone's cup of tea or a good boyfriend at times but I can't deny your a great guy to those that know the real you…. Blessings on blessings on top of blessings OG! Now enough mushy talk!!! ? Y'all go wish my baby daddy a Happy Birthday @joclive

No word yet on whether Karlie Redd is about to become the fifth baby mama 😉 but, with the LHHATL new season now airing Monday nights on VH1, we also don’t have to wait long before finding out.

MUG SHOT Scrapp DeLeon is still in prison, but could get early parole