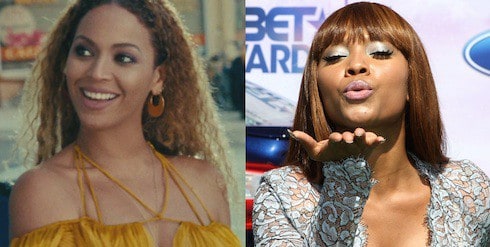 Was Teairra Mari in Destiny’s Child? And, more importantly, did Beyonce have a say in whether or not the Love & Hip Hop Hollywood mainstay would become a star? An intriguing new twist in Teairra’s back story has just emerged, suggesting that an endorsement from Queen Bey–one that Mari didn’t get–could have changed her life forever.

It’s important to remember, though, that Teairra is still a major player in the LHHH universe and a respected singer in her own right, so it’s not like things didn’t work out for her. But, according to famed producer L.A. Reid, a very different career for Teairra was almost a lock. Recall that when Teairra broke into the industry in 2005, Destiny’s Child was heading toward retirement, and there was talk among music industry execs of continuing the group with a different set of members, á la Menudo and other like groups.

Reid described the scene in his 2016 memoir. As he puts it, Epic Records had just signed both Rihanna and Teairra within weeks of each other–and, back in early ’05, the label thought that Teairra had the higher upside. During a label showcase featuring performances by both, Beyonce unwittingly played a major role in shaping the destinies of each:

After signing Rihanna, Jay Z and his team did the A&R for her first album, and I had nothing to do with it. The funny thing about Rihanna’s success was that we signed two girls at that time — Rihanna and a lovely young lady named Teairra Mari. We had an in-house company showcase and Beyoncé happened to be there with Jay Z. Teairra Mari, Rihanna, a four-girl group called Black Butterfly and Ne-Yo performed. At the label, we thought Teairra Mari would be the big star. We spent more time on her, did more work on her, paid more attention to her. Rihanna already had a hit with “Pon De Replay,” but we still thought it was the other girl. A bell went off for me, however, when, after the showcase, Beyoncé came up to me.

It probably didn’t hurt that Rihanna was already slated to participate in a Destiny’s Child tribute later that same year–and at the World Music Awards, no less, with all three members of DC in attendance. What might sting in retrospect, though, is that Teairra went on to perform alongside Rihanna as the second member of the tribute group:

Of course, the oft-rumored Destiny’s Child 2.0 never came to pass. Other than releasing a handful of compilations and performing briefly at the 2013 Super Bowl halftime show and the 2015 Stellar Awards, the group has been on hiatus since 2006. During the same period of time, Rihanna has sold about 200 million albums worldwide. The time-honored maxim holds true: A blessing from Bey is a joy forever.