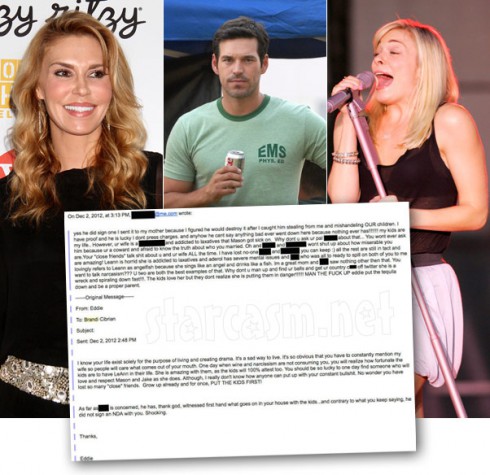 The Real Housewives of Beverly Hills star Brandi Glanville and her ex-husband Eddie Cibrian have been battling it out ever since Brandi revealed in a candid interview with Us Weekly that LeAnn not only has a severe eating disorder, but she’s also addictive to laxatives and one of Brandi’s son accidentally ate one and became ill. After Eddie got word of the interview, he released an email he sent to Brandi on December 2nd in which he claimed she was consumed with wine and narcissism, among other things. Shortly after seeing the leaked email, Brandi tweeted a photo of her own email response along with the words, “This is my response to Eddie’s cruel email.” Although she has since removed the post, we have the photo and transcripts of both Eddie’s email to her and her response.

First up is Eddie’s email to Brandi:

“I know your life exist solely for the purpose of living and creating drama. It’s a sad way to live. It’s so obvious that you have to constantly mention my wife so people will care what comes out of your mouth. One day when wine and narcissism are not consuming you, you will realize how fortunate the kids are to have LeAnn in their life. She is amazing with them, as the kids will 100% attest too. You should be so lucky to one day find someone who will love and respect Mason and Jake as she does. Although, I really don’t know how anyone can put up with your constant bullsh**. No wonder you have lost so many “close” friends. Grow up already and for once, PUT THE KIDS FIRST!

“As far as ***** is concerned, he has, thank god, witnessed first hand what goes on in your house with the kids…and contrary to what you keep saying, he did not sign an NDA with you. Shocking.”

“Yes he did sign one I sent it to my mother because I figured he would destroy it after I caught him stealing from me and mishandling OUR children. I have proof and he is lucky I don’t press charges. and anyhow he cant say anything bad ever went down here because nothing ever has!!!!!!! my kids are my life… However, ur wife is a ****** and addicted to laxatives that Mason got sick on. Why don’t u ask ur pal ***** about that… You wont ever ask him because ur a coward and afraid to know the truth about who you married. Oh and ***** and ***** wont shut up about how miserable you are. Your “close friends” talk sh*t about u and ur wife ALL the time. I have lost no-one ***** and ****** you can keep 🙂 all the rest are still in tact and are amazing! Leann is horrid she is addicted to laxatives and aderol has severe mental issues and ***** who was all to ready to spill on both of you to me lovingly refers to Leann as angelfish because she sings like an angel and drinks like a fish. Im a great mom and ***** saw nothing other then that. You want to talk narcasism??? U two are both the best examples of that. Why dont u man up and find ur balls and get ur country c*** off Twitter she is a wreck and spiraling down fast!!!. The kids love her but they dont realize she is putting them in danger!!!!!! MAN THE F**K UP eddie put the tequilla down and be a proper parent.”

Shortly after posting the email, Brandi had a change of heart and told fans, “Im taking email down I was n defense mode after seeing EC put his on @radar_online Lets not talk of them anymore I was wrong 2 put it up.”

To see our timeline of Brandi and LeAnn’s feud up until this point, click here.

Below is the actual photo of the emails tweeted by Brandi Glanville – just click to enlarge: 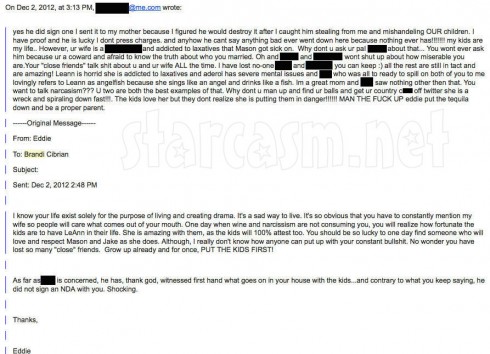 Gerard Butler admits to having “fun” with Brandi Glanville — finally