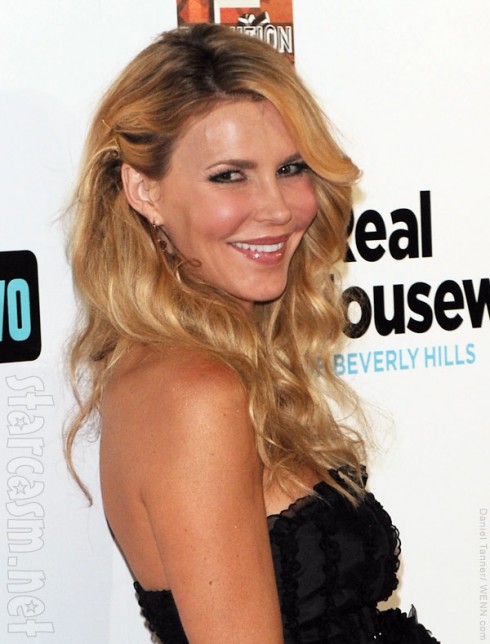 Brandi Glanville joined The Real Housewives of Beverly Hills in Season 2 and quickly made a name for herself as a no-holds-barred “love her or hate her” vixen who said whatever was on her mind and worried about the consequences later. In other worlds, reality TV gold! Now an official housewife, Brandi continues to make waves and during the premiere party, she reminded fans why we love her so much when she dished on her dating life.

Speaking of making out, the ex-model was caught making out with a man during Kyle Richards’ Annual White Party which was filmed for the third season so fans may get to see this feisty blonde in action when the new season returns to Bravo. Of season 3, Brandi dishes that there are a lot of “fun, good times — and a little bit of crazy drunkenness.” Sounds like the perfect combination for reality TV gold.

As for Brandi’s current relationship with LeAnn Rimes, it could be better. “Right now it’s not amazing,” Brandi told OK! Magainze. “I’m just saying… and I’ll leave it at that.” Brandi has been accused of a few mean tweets for her ex’s new wife including a recent one about “twee-hab” not working, but she insists that it is all in good fun.

“Well if you put it on paper and you type it out… it’s not funny but I’m hoping in person it’s funny,” she laughed. “I’m constantly going back and explaining what I meant or what I said or that I’m just joking.”

For more of Brandi Glanville, don’t miss the Real Housewives of Beverly Hills season 3 premiere on November 5 at 9/8c. Brandi is also releasing a dating advice book which is newly titled, Don’t Drink and Tweet . . . and Brandi’s Other Breakup Blunders. Fans can expect to see it on bookshelves early next year.