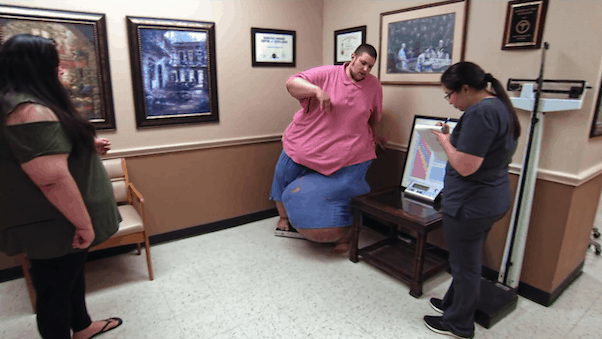 The My 600 Lb Life JT episode is one fans have been awaiting eagerly, even if they didn’t know it. It turns out that native Oklahoman JT Clark is the person behind the mystery 892 pound weigh-in we saw in the Season 8 trailer a few weeks back. However, viewers still frustrated with Bethany’s story from last Wednesday will be pleased to know that it looks like JT’s episode has a very different outcome.

Unless we’re mistaken, JT is the second-heaviest person ever to appear on My 600 Lb Life. The 32-year-old’s peak weight is behind only that of recently deceased Sean Milliken, who at one point during his three-episode journey weighed 1,003 pounds. JT is also the heaviest cast member since Season 6’s Robert Buchel, who was 842 pounds at his first weigh-in.

Adding to JT’s weight — and compounding his misery — is the 100+ pound lymphedema mass on his leg. Despite the constant encumbrance, JT, aided by his then-girlfriend Jessica, manages to make the 500 mile journey to Dr. Nowzaradan’s practice. (Quick side note: Has any cast member ever *not* made it to Houston?)

On that note — and before we go any further — here’s the My 600 Lb Life JT episode synopsis from TLC, followed by the just-released preview clip:

J.T. is almost 900lbs with a 100-lb lymphedema mass on his leg and a food addiction that is bound to kill him if he doesn’t change. His girlfriend takes him to Houston, but when his behavior drives her away, J.T. is left with only Dr. Now to help.

At nearly 900-lbs, the strain of travel takes a tremendous toll on J.T. Follow his weight loss journey on a new #My600lbLife tonight at 8/7c. pic.twitter.com/nSpS6qlhLc

The network is so far keeping up its practice of protecting new episode details before the official premiere. But, since the My 600 Lb Life JT episode is available for early streaming, we can give you the highlights from JT’s journey before it drops later tonight 🙂 Consider this your spoiler warning: 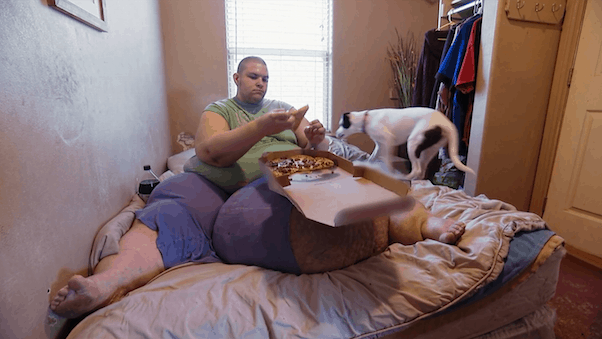 Through the first few months of the My 600 Lb Life JT episode, JT does managed to make some serious strides. Halfway through the year, JT has actually lost almost 300 pounds: he’s down to 619 at his eight-month weigh-in. But JT is bummed, because he knows he’s still too high for the weight loss surgery he so craves…except that when he actually visits with Dr. Now, the surgeon reveals he’s approved JT for surgery at the 10-month mark, based on JT’s steady progress. The only catch is that he has to have lost a further 40 pounds by the surgery date.

In the very next scene, we find out that JT did indeed meet Dr. Now’s condition, and is ready for the procedure. His lymphedema makes the logistics a bit tricky; the surgical team has to spend more time than usual securing JT on the operating table, for fear of a limb slipping off and its momentum pulling JT’s whole body with it.

After the surgery goes well, Dr. Now goes so far as to say he’s “proud of JT” for how far he’s come. “I’m confident that…he’ll be able to do this for the long term,” Dr. Now adds.

By the end of the My 600 Lb Life JT episode, the man’s triumph is pretty well complete. JT tells us in a voiceover that he’s “just barely in the 400s” at 491 pounds — meaning he lost an applause-worthy 401 pounds during his year of filming. JT also tells us that he’s been promised lymphedema surgery “in the next couple of months,” should his weight loss continue at its current pace.

Since JT’s lymphedema weighs north of 100 pounds, having it removed would drop him into the 300 pound range, and give JT even more positive momentum. Dr. Now and JT both mention that his goal weight is 220, a number that removal surgery will render agonizingly close.

We can also extrapolate, based on the round of surgery dates for current cast members, that JT had his gastric sleeve surgery in late 2019. In other words, “the next couple of months” is most likely right now. Unfortunately, JT is like TLC in that he keeps his personal life pretty close to the chest. He hasn’t shared any photos of any kind since his weight loss journey began. All we know for sure is that he still lives in Houston, meaning he’s still benefiting from a full collaboration with Dr. Now.

If you just can’t wait for the broadcast premiere My 600 Lb Life JT episode, you can stream it right now via the show’s web site.