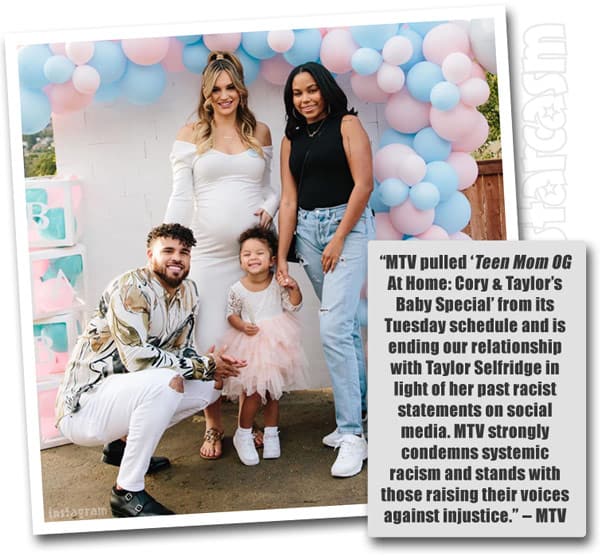 Teen Mom OG fans were confused on Tuesday night when the highly promoted “Teen Mom OG At Home: Cory & Taylor’s Baby Special” did not air. Fans were apparently not the only ones confused because Cory Wharton was promoting the special earlier on Tuesday. “Tonight I had the pleasure of shooting a one hour special about the birth of my youngest daughter Mila Mae Wharton,” Cory wrote in a message encouraging fans to tune in.

After the episode didn’t air, MTV issued a statement to People announcing that they were “ending our relationship with Taylor Selfridge in light of her past racist statements on social media.”

Here is the full statement from an MTV rep:

MTV pulled Teen Mom OG At Home: Cory & Taylor’s Baby Special from its Tuesday schedule and is ending our relationship with Taylor Selfridge in light of her past racist statements on social media. MTV strongly condemns systemic racism and stands with those raising their voices against injustice.

In case you were unaware, Taylor made a number of offensive tweets between 2011 and 2013 when she was 17-19 years old. Here is a collection of all of Taylor’s controversial tweets that I could find:

Taylor shared her own statement on Tuesday, but she seemed to indicate that it was her decision to leave MTV and reality television, not MTV’s:

As you guys know already our special didn’t air tonight. I made the decision last week to not film the next season of teen mom OG with Cory for the benefit of myself and my daughter. I don’t believe the reality tv lifestyle benefits me any further at this point in my life. With current events being what they are and reality tv being selective in who they apply rules to or what is considered acceptable behavior, I do not have any further respect. Once again, I apologize for anyone I have hurt or offended in the past. I have addressed my mistakes many times on the network and I would like move on and continue to be the best version of myself. My past does not define who I am today and I hope you guys can see the change. Please respect my decision to provide a normal, healthy life for my family.

More than a week before, Taylor shared a post expressing her support for the #BlackLivesMatter movement in the wake of the birth of her daughter Mila: 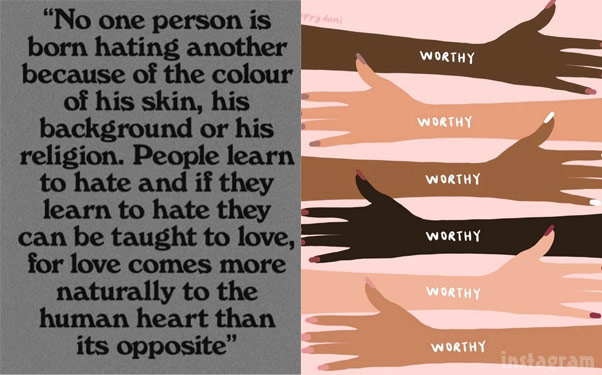 As a new mother, with a child with a diverse background. I have the opportunity to rewrite the future as well as every other parent out there right now. We have to teach our children to LOVE! People learn to hate! It is very important to me that my daughter is raised knowing how special she is and loving all sides of her family. I know that I still have a lot to learn and I’m learning every single day. This is another learning experience for me. I stand with George Floyd and pray justice will be served ✊

Cheyenne responded to Taylor’s most recent post from Tuesday about parting ways with MTV with words of support. “Ryder, my family and I love and support you always,” Cheyenne wrote, adding a heart emoji.

MTV cutting ties with Taylor due to her racist tweets from when she was a teenager comes on the heels of the network severing ties The Challenge‘s Dee Nguyen due to her recent comments about the #BlackLivesMatter movement. After Dee was criticized for participating in Blackout Tuesday, she responded by tweeting: “IDK why some of you think I’m anti-BLM. I’ve been saying that since the day I lost my virginity.”

After Dee initially responded to criticism by calling out cancel culture, she then changed her tune and apologized for her comment. “I am sorry for the insensitive tweet I posted earlier,” Dee wrote. “I was being defensive and not speaking from my heart. But there’s no excuse. I also want to extend an apology to Bayleigh and Swaggy– who are my cast mates and deserve my respect and compassion.” She later added: “BLM to me every day. I’m trying to do the best I can with what is currently accessible to me.”

Getting back to MTV cutting ties with Taylor, the announcement has sparked numerous debates on social media. One major topic of discussion is why MTV waited so long to “strongly condemn systemic racism” in regards to Taylor. The network has clearly known about her “past racist statements on social media” because they were addressed on Teen Mom OG. “I’m never going to feel comfortable having her around Ryder until we address her racist tweets,” Cheyenne told Cory in a Season 8 episode. “I wouldn’t feel right as her mother and I’m black without addressing the elephant in the room.”

Cheyenne eventually met with Cory and Taylor and shared her concerns. Taylor responded by expressing regret and assuring Cheyenne that she has since matured. “I don’t think that at the time, because I was younger, I don’t think I was thinking that it was anything negative.” Taylor said. “I thought, ‘Oh well, this is funny or something like that.’ But it’s not. I’m 25 now, this happened a long time ago. I don’t feel like that at all. That’s my biggest mistake. I just had to grow up, honestly. And I had to experience other places. I was in one place for so long.”

Taylor added, “I’m not [racist] but it’s hard to say that I’m not to anybody because of things that they’ve seen.”

And let’s not forget that Cheyenne has her own controversial tweets about race. “My mom said I can’t see [the movie] The Help, she knows I already have a problem with white people,” Cheyenne tweeted in 2011. “Last night I saw [The Help] and I wanted to kill every white person I saw,” she later updated.

The same year, Cheyenne retweeted this comment from a friend: “[Cheyenne] and [redacted] are the only Nazi-loving, black power-having, ‘kill-a-white-baby-if-I-could’ people I can accept & adore.” In 2012, Cheyenne tweeted: “This little white kid told me I looked like a cat today. I shoulda kicked him in his head.”

After much speculation and false reporting, it is confirmed that @MTV has not fired Amber Portwood, and she is already filming for a new season of #TeenMomOG!
💰💰🤷🏼‍♀️💰💰 https://t.co/b0JlrkGEXV

MTV taking the moral high ground in regards to Taylor’s racist tweets is also stirring up a debate about the network’s lack of a moral high ground when it comes to continuing to work with other controversial cast members. In just the Teen Mom franchise alone, there are numerous examples of cast members who have engaged in horrific behavior that often goes well beyond words on social media.

Cheyenne’s Teen Mom OG co-star Amber Portwood was convicted of felony domestic abuse in 2012 after violently attacking her ex Gary Shirley multiple times, including occasions when their infant daughter Leah was present. After dating Matt Baier on air (who has a reprehensible history of being a deadbeat dad as well as posting deplorable things online about Teen Mom cast members), Amber was arrested for domestic violence yet again in 2019 after allegedly attacking Andrew Glennon (who was holding their infant son James at the time) with a machete. MTV even aired some of the terrifying audio recordings that include Amber threatening to kill Andrew.

What did MTV do? They flew the other moms (with the exception of new addition Mackenzie McKee) out to Indiana to show support for Amber as they tried to spin the attacks as the result of mental illness and post-partum-depression.

As far as other examples, there was the time that Kailyn Lowry got mad at her ex Jo for giving their son Isaac a haircut. “Little white boys don’t get their hair cut like that,” Kail texted to Jo. “He’s too young for that. He’s half white. I don’t like his hair cut like that. Please don’t do it.” (There’s a petition to boycott Kail’s Coffee Convos podcast and Teen Mom 2, but some of the allegations in the petition have not been confirmed.) Maci McKinney’s husband Taylor has some questionable tweets as well.

I won’t even go into how far MTV was willing to lower their high horse in regards to Jenelle Eason, including keeping her around after she called her ex Kieffer Delp the n-word. (It literally took the crew members being fearful for their lives to eventually part ways with Jenelle. And even then, their statement clearly left open the possibility of her being able to return.)

And that’s just the Teen Mom franchise! MTV has basically branded itself as the premiere source for reality show entertainment featuring young people doing regrettable things. Firing Taylor and issuing a statement like they did certainly seems to leave the door open for MTV for be swept under a tidal wave of criticism for their apparent moral inconsistencies in regards to their casting choices.

#JerseyShore Ronnie arrested for kidnapping! Cops tasered him after he reportedly slapped & punched gf Jen Harley, then chased her out of the couple's Airbnb holding a knife & their infant daughter. Get details, including a video of Ronnie being arrested! https://t.co/C7eMZmmpCc

It remains unclear what Cheyenne and Cory’s future will be with MTV and Teen Mom OG. Personally, I cannot imagine Cory would return to the show after MTV fired Taylor for being racist. And if Cory doesn’t come back, producers will have a hard time maintaining an interesting story line for Cheyenne.

Cheyenne is fantastic at addressing very difficult issues, so I look forward to her response to Taylor’s firing. She shared a post of her daughter Ryder blowing a kiss on Tuesday and concluded her caption by writing: “I am going to take a few days to process & feel..I love you all.”

UPDATE @CoryWharton responds to @MTV ending their relationship with Taylor Selfridge with an emotional Instagram Live video. "I have NOT parted ways with MTV…All I'm asking is that you hold everybody accountable." https://t.co/prCQLZ8iNj pic.twitter.com/nQffJ4xpcK