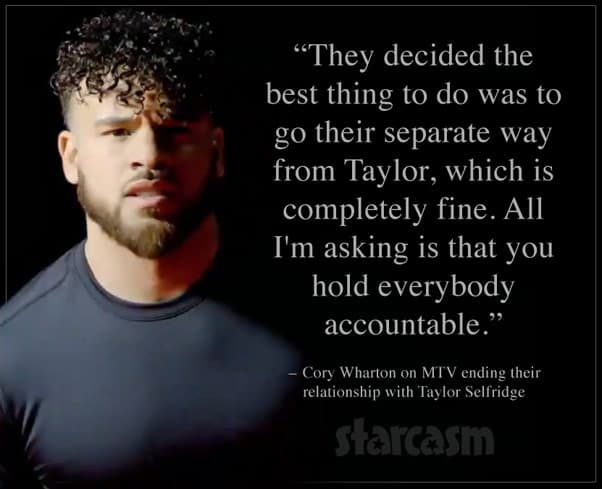 Cory starts his live session by bringing up his favorite athlete Kobe Bryant’s favorite philosophy of “control what you can control.” He says that MTV’s decisions are an example of something he is not in control of.

More from Cory on his relationship with MTV:

I learned that burning bridges is not the solution. Even though I have no ill will against MTV, I’m disappointed, I’m hurt, and I’m saddened by their decision. As all of you know, narrative is a very powerful tool. I feel like the narrative that you guys want about me should be accurate, it should be true, and it should be from me.

Cory then reveals that he will be focused on The Wharton Family YouTube channel. “That’s where you’ll get an inside look at my family as we build our lives together,” he says.

That inside look includes Cory and Taylor’s own version of the Mila birth special that MTV didn’t air. “Next Wednesday, we will be posting the birthing video ourselves, and it’s gonna be lit!” Cory says. “It won’t be the special, but it will be better than the special. And I want to introduce you guys to Mila.”

In addition to the birth special, Cory says fans can expect to hear “how this whole situation kinda played out” as well as “where I stand and where my family stands” in regards to MTV and Taylor parting ways.

Soon after firing #TheChallenge's Dee Nguyen for her #BlackLivesMatter remarks, @MTV ends their relationship with #TeenMomOG's Taylor Selfridge due to her racist tweets from 2011-13. Should MTV's numerous other controversial reality stars be nervous? https://t.co/6DhUfyFlLl

Occasionally, Cory seems to be holding back a bit on what he really wants to say. “I’m not on here to bash anybody,” he states. “I’ve had my conversations with MTV. They know how I feel about this. I’m really trying to keep everything positive. I’m not one of those people that throws other people under the bus just to help myself out. I’m not gonna do that.”

Cory gets emotional throughout the video, including a long pause when he talks about how this is impacting Taylor:

Taylor’s strong and she’s pulling through, and I’m super proud of her. I feel like she’s apologized for this many times on the network, and she’s probably going to continue to have to apologize for it. But I know this girl better than anybody else, and she — [Cory breaks down] It’s tough, man! Because when you see somebody that you love being painted a certain way and that’s not who she is, it’s hard man. It’s tough. It’s hard. I can’t believe I’m on Instagram live crying to y’all! This is ridiculous. But I just feel so strongly about this, and I’m really trying to watch what I say because, you know, there’s a lot that’s going on right now and it’s just — it’s tough.

Later in the stream, Cory seems to take MTV to task in regards to other cast members who should be given the same treatment as Taylor due to their words and/or actions. “Everybody makes mistakes,” Cory admits. “I think we’re missing the main message here, and I want it to be that there needs to be change. And they decided the best thing to do was to go their separate way from Taylor, which is completely fine. All I’m asking is that you hold everybody accountable. And that’s that.” Cory then iterated his point: “You know, if you guys want to go down this route, I just hope that they hold everybody accountable.”

At the end of the video, Cory remains positive as he assures everyone that he and his family are doing well. He also says that he thinks not having Taylor on the show due to her comments from when she was a teen is a missed opportunity for the network to document change:

My family’s good, Taylor’s good, Mila’s healthy, Ryder’s healthy, Cheyenne’s good — we’re all good over here, man. So thank you guys for your constant support. We appreciate it. I’m going to continue to try to lead by example and be the father that I am. I want to show people, you know, I think it’s good to have positive role models on TV. I think we could have had a moment there where it would have been good to show people can change and to have these discussions. But, you know, it is what it is. We’re not gonna lose sleep over it. I’m a little hurt, but it is what it is. It’s not my decision.

Here’s a link to The Wharton Family YouTube channel. As he mentions, they plan to share the roughly 60-minute Mila birth video next Wednesday.