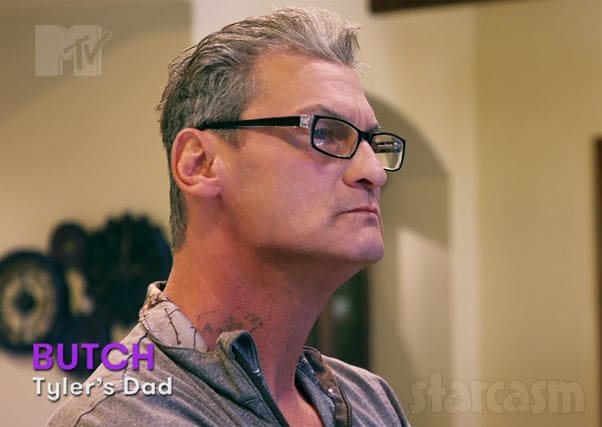 On the most recent season of Teen Mom OG, Tyler Baltierra revealed that his dad Butch Baltierra was back in Michigan. Butch had been living near Austin, Texas after an extended stay in a drug rehabilitation center there. On a recent episode of the show, Tyler expressed concerns about the fact that Butch was no longer sober, and Tyler would eventually choose to not invite his dad to his daughter Vaeda’s one-year birthday party.

Tyler’s concerns about his dad may have been well-founded because it appears that Butch Baltierra has been arrested again.

According to jail records, Butch was booked into Genesee County Jail in Michigan just after 5:30PM today. The Ashley’s Reality Roundup broke the news moments ago, and she adds that Butch looks to be facing two charges. It’s still unclear what the charges are. “For one of his charges, his bond has been set at $4,964, according to county records,” The Ashley reports. “For the other, it appears that he has no bond offered.”

I could not find any additional information either, as the Genesee County Jail inmate information link takes you to a site that they do not appear to be partnered with any longer. Butch’s entry on the Michigan Department of Corrections website has not been updated since 2017.

The arrest will mark an end to what was a relatively successful run for Butch. Despite his lack of sobriety, the 57-year-old has managed to stay out of jail since late 2016 when he was booked in Michigan for driving on a suspended license.

During his time in Texas, Butch got a job doing fence work. He also found himself a significant other in the form of his on-again, off-again girlfriend Caroline, who was featured on an episode of Teen Mom OG.

While with Caroline, Butch admitted to not being completely sober by saying he engaged in “marijuana maintenance” to help cope.

Tyler’s sister Amber Baltierra followed in her dad’s footsteps by heading down to Austin for rehab in May of 2018, and then electing to stay after getting out. She and Butch seemed to bond while both were in rehab, but their relationship would later fall apart.

“He’s smoking weed again,” Amber said about Butch in April of last year. She added that “he drinks a couple beers here and there as well. He thinks he can manage all this but it will progress into something big again. That’s what this disease does.”

Tyler appeared on Kail Lowry’s Coffee Convos podcast and shared some additional information on Butch falling off the wagon. “He’s in the middle of a relapse right now,” Tyler revealed. “That’s the reality of that situation right now.” He added: “Now we go back to square one, do this relapse thing and kind of ride this train out and see what happens.”

Adding more disharmony to the Baltierra family dynamic, Butch’s girlfriend Caroline had a HUGE falling out with Amber, Tyler and Catelynn. In addition to claiming that Caroline was a bad influence on Butch in regards to his sobriety, Amber, Tyler, and Catelynn were also deeply offended by a series of disturbing text messages sent by Caroline.

In some examples from the messages allegedly sent to Amber, Caroline said that Butch “wishes you were one of the abortions.” She later made a comment about Amber enjoying having sex with her mother Kim’s boyfriend before adding: “[Butch] wishes you were out of his life, you f**k with him and hold him hostage for your issues. I feel sorry for him that you make him feel so miserable.”

#TeenMomOG @TylerBaltierra's sister Amber Baltierra was arrested for assault in Texas this weekend after a fight with her ex. Plus, Amber puts a woman on blast who has been helping take care of her kids back in Michigan?! https://t.co/9d3YHbQVQC

Amber later had her own issues with the law post-rehab when she was arrested in Williamson County, Texas in November of last year. Amber was charged with assault after an altercation with her ex-boyfriend. That case is still ongoing with the next court date scheduled for late July.

We will continue to keep an eye on Butch’s case and will update when we have more information.

Why Catelynn Lowell and Tyler Baltierra did Couples Therapy… according to Butch?!?