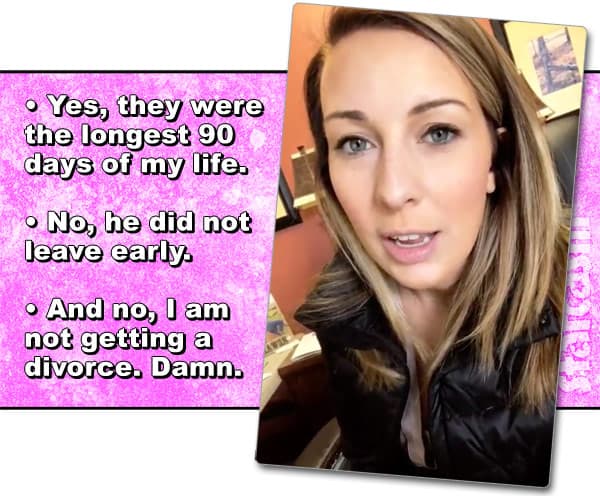 As we reported yesterday, Teen Mom OG dad Ryan Edwards has left a rehabilitation center in Alabama after completing a 90-day stint for his drug addiction issues. There was some confusion among fans about whether or not Ryan was released early, and also whether or not Mackenzie and Ryan are getting a divorce, so Mackenzie took to Instagram to clarify in a series of videos.

“So here we go with more stories that are really annoying,” Mackenzie begins the first video. “So, instead of responding individually, I’m just going to do a collaborative thing here.”

Mackenzie pauses briefly. “We’re fine,” she says. “It’s not as exciting as it sounds, but we’re good.”

In the second clip, Mackenzie addresses three questions — including a reference to her Instagram comment on Monday in which she stated “Longest f**king 90 days of my life and they are COMPLETED.” Here are Mackenzie’s bullet point responses:

After making those clarifications, Mackenzie went on to explain why she took the time to address the misinformation. “So, a lot of the response has been, like, ‘Why don’t you just ignore it, and, you know, move on?'” Mackenzie reveals. “That’s all fine and dandy, but if your life was out there and you were going through difficult things, you’d want the truth too.”

You can rise up from anything. You can completely recreate yourself. Nothing is permanent. You’re not stuck. You have choices. You can think new thoughts. You can learn something new. You can create new habits. All that matters is that you decide today and never look back.

In addition to acknowledging the major events in her life on social media, it may be that Mackenzie is looking to do the same on her body as she posted this request to her followers: “Need suggestions for tattoo artists in the Chattanooga area!” Of course, given that Ryan doesn’t have much of a social media presence any more, it could be that she was asking on his behalf. I could certainly imagine him getting a tattoo for his newborn son Jagger to match his Bentley tattoo.

Once again, I want to applaud Ryan for remaining in rehab for the full 90 days, and I am officially cautiously optimistic that he is finally committed enough to make a real and lasting change in his life. And hopefully the positive changes will mean Ryan is able and willing to return to Teen Mom OG, and that we will be able to see the results first hand on screen.