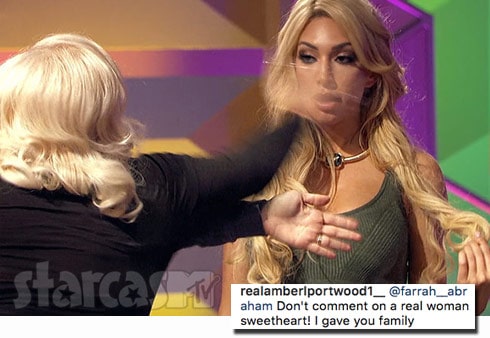 Teen Mom OG stars Farrah Abraham and Amber Portwood are flipping out on each other over their ability to flip a house.

While out promoting her appearance on the most recent iteration of Marriage Boot Camp, Farrah has talked all kinds of ? about Amber. She doubled down on insinuating that Matt Baier is a pedophile and then trolled Amber by saying that Portwood looked like a “cheap hooker” with her pink hair in her wedding dress.

Last week Farrah posted a snap of herself with Simon Saran and a couple of kids in front of a boarded up house. She then touted her own house flipping skills with the caption writing, “House Flipping fans already ! Thanks loves @furnishedbyfarrah in #sanfrancisco taking @simon_23_saran to new levels.” We later spoke with an inside source who confirmed that Farrah and Simon are working on a house flipping reality series, which has already been picked up by a cable network1

Fans of the show started accusing Farrah and Simon of being copycats of Amber and Matt with their attempt to get in on the house-flipping business. Farrah, of course, replied:

Amber clapped back at Farrah when she became woke to the fact that she was sitting in her co-star’s shade:

“Don’t comment on a real woman sweetheart! I gave you family bootcamp lol and I make money on my houses…I don’t lose money like your other house. This is why you shouldn’t do Cocaine and drink all the time okay honey. Your forgetting things like you know That guy you met online in NY?? Keep it up and I will literally stop all this with one interview and text messages. Don’t play with a true Queen sweetheart ? try me!!”

If Amber shares those text receipts we’ll let you know!