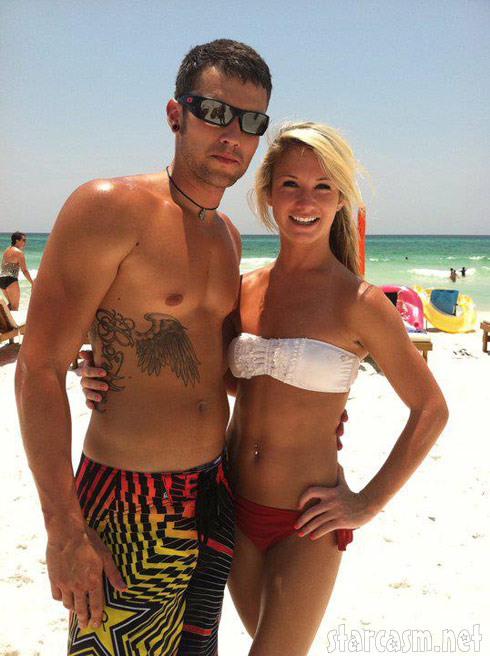 A huge part of Maci Bookout’s storyline so far this season on Teen Mom has been her decision to allow her boyfriend Kyle King to move in with her, which has ruffled the feathers of her ex Ryan Edwards as well as Ryan’s parents, who stated on the show that Maci and Ryan’s son Bentley didn’t need a bunch of guys in and out of his life. 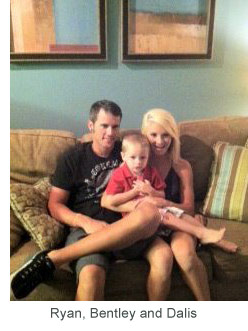 To be honest, I don’t get what all the hubbub is about because weren’t Maci and Kyle living together before? And plus, Kyle seems like a reliable guy who has a great bond with Bentley. Anyways….

So with all this talking about the effect Kyle is having on Bentley, I thought it made sense to talk a little about Ryan Edwards’ significant other, 19–year-old Dalis Connell. Granted, the two aren’t currently living together – due in large part to the fact that Ryan still lives at home I’m sure – but judging from their interactions online and the number of affectionate photos of the two together, they are quite serious. So who is Dalis Connell, Bentley’s potential “other mother?” 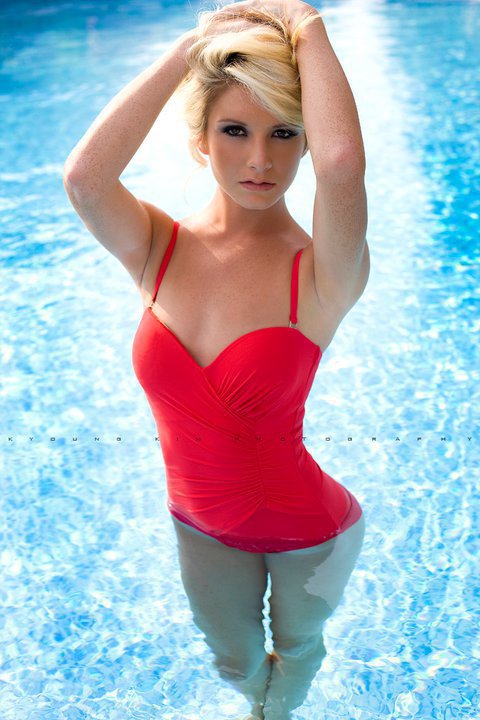 First and foremost let’s get the obvious out of the way. Dalis is mighty attractive. I know there are a lot of Teen Mom fans that will try to argue otherwise, but I just don’t see it. I think Maci is mighty attractive too and I hope we can avoid turning this into some sort of beauty contest.

OK, now that that’s out of the way, let’s get on with getting to know Dalis!

Dalis Paige Connell was born on May 16, 1992 in Chattanooga, Tennessee. But, don’t think that means she’s been a Smoky Mountain gal all her life! Dalis moved out to Malibu, California at a very young age and remained there until returning to Chattanooga during her junior year of high school. 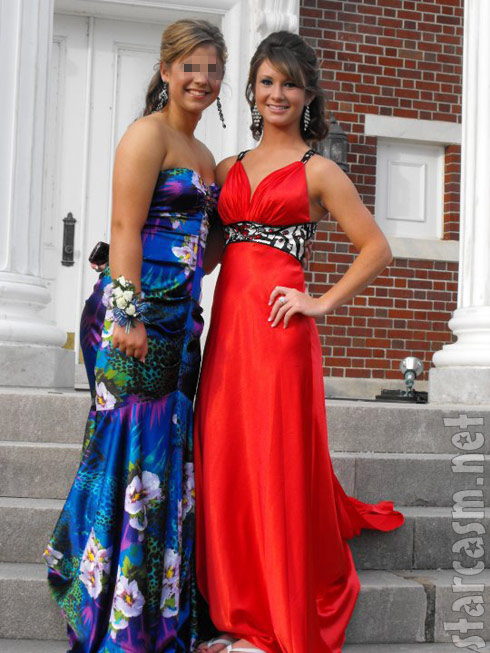 ^ Dalis wasn’t always blond! Here she is as a brunette heading to prom.

While in California Dalis took to beach living like a fish to water, learning how to surf, wakeboard, and just about every other activity that can be performed in the presence of sun, sand and water.

Her athletic interests didn’t stop at the water’s edge, though. Dalis was a multi-talented athlete at Boyd-Buchanan High School, including basketball, volleyball, and running track – the latter of which earned her a scholarship to Tennessee Tech where she is currently enrolled and planning to get a degree in Pre-Physical Therapy and Personal Training.

While not hitting the books or smooching on Ryan Edwards, Dalis is flinging wings at a Chattanooga Hooters, which she really seems to enjoy. Here’s a photo of her “in uniform” with a co-worker: 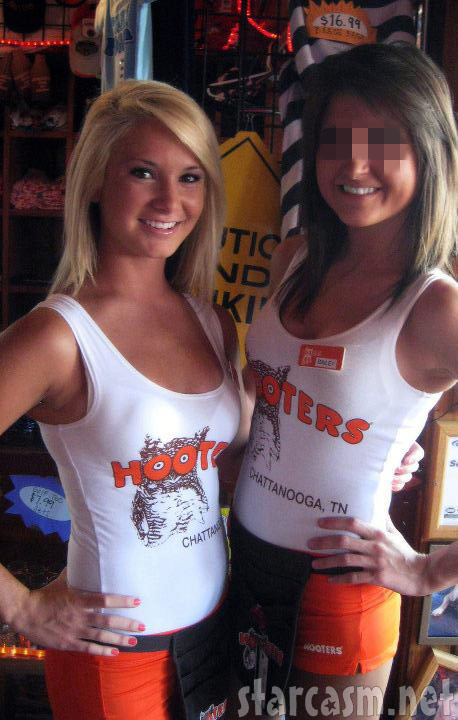 In addition to working as a waitress, Dalis also does some modeling work – as you can probably tell from the red swimsuit photo above. Here’s another sample of Dalis in front of the lens looking quite a bit older and downright Faith Hillish! 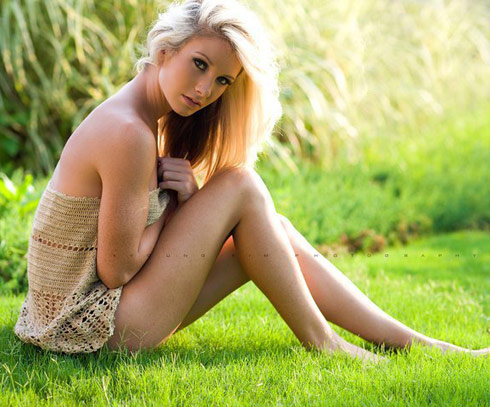 So, Dalis is an attractive, young, intelligent, physically fit woman with a good-paying job, a scholarship and a career plan. That all sounds like amazingly positive stuff to me! But, the most positive thing I can say about Dalis is that after she began dating Ryan and has weathered the inevitable harsh comments and criticisms from fans, she has had nothing but kind and pleasant things to say. She has been quick to defend her man Ryan, but she doesn’t come across as spiteful, vindictive, or hateful. In other words, she sure seems like a very nice person.

Oh, and did I mention affectionate? 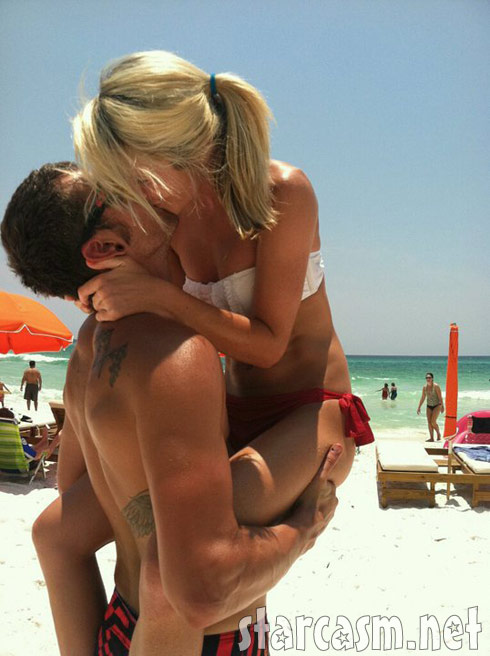 In addition to the physical PDAs, Dalis has been generous with the virtual ones as well. Here are some Ryan-lubbin’ tweets from Dalis over the last month: 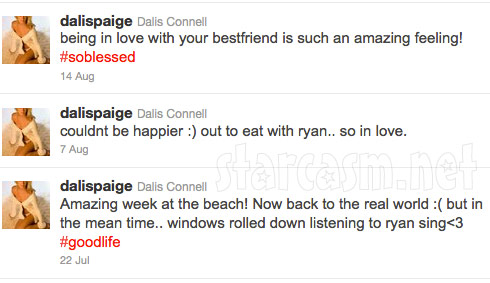 So there you have it! That’s Ryan Edwards’ new girlfriend Dalis Connell, or at least about as much as you can know about her without actually meeting her. I tip my hat to Ryan in what appears to be a mighty fine choice! I only hope Dr. Drew doesn’t find out, causing him to fly into a violent, jealous rage!

Oh, I do have one negative thing to say about Dalis. I’m a Washington Redskins fan (Lord have mercy on me) so I have to confess I’m not a huge fan of her name. Although, it does have a creative spelling! Of course, I don’t think I would like it any more if her name was Washington Connell.