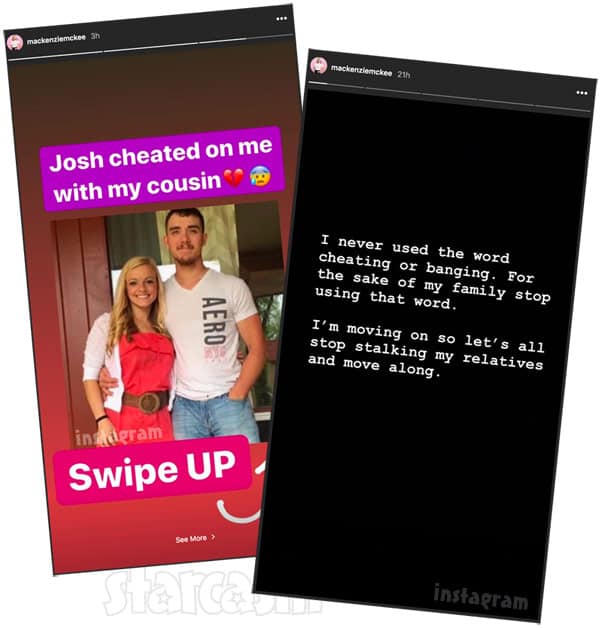 Teen Mom OG star Mackenzie McKee appears to be walking back her comments about her estranged husband’s relationship with her cousin. In her initial Facebook post announcing the couple’s split, Mackenzie revealed that she “made the random decision to pull Josh’s call and text logs” this week and found out that “he was texting a woman 3-600 times per month on these nights he was ‘fishing’ until 3 AM.” She later found out that the woman was her cousin Ashley, and Mackenzie described the situation as “obviously another affair.”

Within 24 hours, Mackenzie’s Instagram account shared a sponsored link post in her stories about the break up with the headline: “Josh cheated on me with my cousin 💔😰.”

Fast forward another 24 hours and Mackenzie shared another sponsored link to a Champion Daily story in which she provided exclusive quotes about the break up. In that article, Mackenzie described Josh’s relationship with her cousin as an “emotional affair.”

Here are a few excerpts from the Champion Daily post, which we previously recapped:

“She cuts hair for a living and has cut Josh’s hair along with all my family’s for years,” Mackenzie continue sharing about her cousin, Ashley.

So how did she figure out Josh was cheating with her cousin?

Mackenzie explained that, “Long story short I pulled his phone records and found he had been texting and calling a number more than necessary. And it was my cousin. My heart sank more than ever and that’s when I chose that we were done for good and posted the status.”

Mackenzie next shared how her family took the news, stating, “My family being very close did not know how to take it. Josh and Ashley both say that a lot of them were chatting about a hair cut, and she was going through Josh to get some anxiety meds from his brother, and that Josh would come to her to talk about our problems and ask her advice.”

“According to them it ‘isn’t what it looks like, but looking back its wrong,’” she continued detailing. “And he says she was always telling him he needs to man up and be here for me.”

#TeenMomOG Mackenzie McKee shares more details on her split from husband Josh. "I will admit to calling him mean names everyday and pushing him away," she says. She then calls the relationship between Josh and her cousin Ashley an "emotional affair." https://t.co/OMbutd7Ou2

Mackenzie went on to explain her reaction to their explanation, noting, “To me, if a man came to me, it is not my place to speak to him. It’s inappropriate and in my eyes this is an emotional affair.”

“What really went on?” she then said. “Idk…… But I’m tired of laying in bed and wondering. I shouldn’t even have to wonder or worry. I feel betrayed by my own family and things will never be the same.”

She also added that, “Josh’s job was to hold me together and selfishly he was thinking about himself. He could have handled my behavior in a whole new way. Go to a preacher, a therapist. But NOT my cousin.”

As you might expect, Mackenzie announcing publicly that her husband had “obviously another affair” with her cousin, and revealing her cousin’s name and profession, looks to be causing a bit of friction in her family. Mackenzie later stating that Josh and Ashley’s “affair” may have only involved texting and talking on the phone didn’t seem to fix things, and she took to her Instagram stories on Friday to try to put the genie back in the bottle.

“I never used the word cheating or banging,” Mackenzie’s message begins. “For the sake of my family stop using that word.”

Mackenzie’s post concludes with hopes that everyone can get past the whole Josh having an affair with her cousin thing. “I’m moving on so let’s all stop stalking my relatives and move along,” she writes.

Some of the sponsored posts, like the initial one that clearly stated “Josh cheated on me with my cousin,” are not actually made or shared by Mackenzie. They are created and shared by a third party that Mackenzie has given access. However, they are on her account, so she should take ownership of them — especially when they are made to appear as though they are from her. She should also take ownership of the fact that she described Josh’s relationship as an affair, and that she posted the woman’s name and the fact that she is her cousin on Facebook, and then again in an on-the-record interview.

Mackenzie has never actually clarified publicly that Josh did not have a physical affair with Ashley, merely that she would describe their relationship as an “emotional affair,” which I would assume is similar to “emotional cheating” or “emotional banging.” If she wants people to move on, then she needs to make that clarification, and also apologize for her choice of words.

So far, Josh has remained quiet publicly, despite the affair allegations.

UPDATE – Mackenzie has clarified a bit more with her interactions on Twitter:

MACKENZIE: I never used the word “banging” or “cheating” please stop stalking and digging for relatives and invading privacy. Josh was texting and calling her for advice on how to handle me and to me that was wrong on both ends and enough to walk away. Now let’s all move along.

MACKENZIE: They refuse to call it that. But I do think an emotional affair is a thing. I do not go to men for marital advice. Unless a counselor.

TWEET: That doesn’t sound valid. If I had a husband calling my relative for advice on me it wouldn’t be a big deal. Had to be more to it.

MACKENZIE: It actually is a big deal. It was being done behind my back. And she is not a counselor.

TWEET: So sorry it happened to you! I’m guessing he was telling her way more than he should. You’ll be better in the long run, you’re a catch!

MACKENZIE: Not physically but it was wrong.

Not physically but it was wrong.

TWEET: Wait hold up. He never actually cheated? Like had sex, made out, etc. he actually went to her for advice to help? Something is missing here.

MACKENZIE: Yes. Tabloids used the word cheat and bang. Not me. But them texting was being hidden from me and the situation was not ok.

MACKENZIE: I was a bit dramatic on the number but it was a lot of text. In a time he should have been focusing on getting me Help.

TWEET: You’re so strong. I’ve been through a VERY similar situation as well – going through a divorce as we speak. I’m also T1D..we are warriors!! Sending prayers and hugs sweet girl!!

MACKENZIE: I’m not sure the time of the phone calls but he was fishing until 3 am a lot latly. Who knows what time the calls happened. But like I said. I walked away so I don’t have to ever wonder.

TWEET: Wait what?! Who the hell fishes till 3am nah.

TWEET: My husband texts my parents or close friends all the time if he’s worried about me and needs advice. Unless you’re controlling, this isn’t wrong.

MACKENZIE: But it was being hidden from me. Point blank.