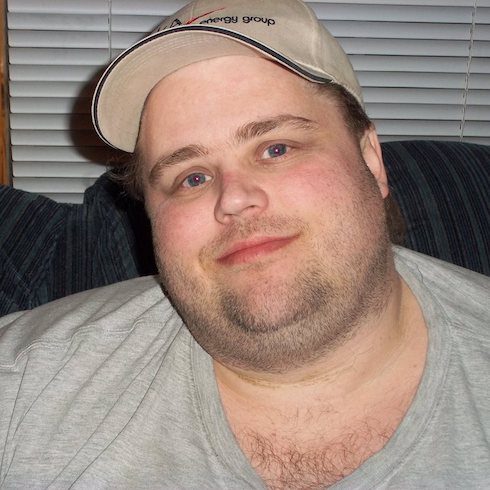 My 600 Lb Life Season 5 cast member James King was, at the time, the heaviest person ever featured on the show. (James weighed 791 pounds at the outset of his initial episode; late Season 6 cast member Robert Buchel weighed over 800 pounds when viewers first met him.) And not long after James’ episode aired, he was rushed to the ICU with kidney failure, cirrhosis, and other life-threatening issues.

But the latest My 600 Lb Life James K update is something of a positive one. Though he was indeed near death earlier this year, James did not die in the hospital, as had been widely feared. But his weight appears to still be alarmingly high.

During James’ debut My 600 Lb Life episode, he was bed-bound due to a combination of extreme obesity and debilitating cellulitis. The ailments’ effects were so powerful that James was unable to care for his father — something that also served as his primary motivation to qualify for weight loss surgery.

James and his fiancée Lisa were optimistic upon making the journey from Kentucky to Houston. Over the course of that first episode, though, James’ weight dipped down into the low 600-pound range, before climbing steadily back up.

And James’ Where Are They Now?? follow-up, which aired earlier this year, only displayed more bad news for (and bad habits of) the 47-year-old. In one of the more ignominious displays in the show’s history, Dr. Nowzaradan eventually called Adult Protective Services on Lisa after he discovered that James’ organs were beginning to fail — and that Lisa had been sneaking food to James in his hospital bed.

“[James’] kidneys aren’t functioning properly,” Dr. Now explained. “He has Anemia. His body isn’t getting the oxygen it needs. Even though [his family] knew his health was starting to fail they didn’t change his diet and he was still overeating.”

James’ lowest weight on the show was 638 pounds; he also climbed up to a new peak weight of 840. By the end of the first My 600 Lb Life James K update show, Dr. Now had dismissed him from the program altogether.

Before long, James appeared to be on his deathbed

The most shocking turn in James’ story was yet to come. In January of this year, reports that he was very near death began circulating, first on Reddit and then in a handful of media sources. It emerged that James’ still-failing organs had caused a number of serious medical problems, among them a blood infection, first-stage cirrhosis, and ballooning weight due to fluid retention.

Here’s the source of the news from earlier this year, which is said to have come via a Facebook message written by James’ fiancée Lisa. (We say “said to have come” because it appears the exact author and contents were never completely verified).

james is still in the ICU and yes he has been diagnosed with sepsis and also first stage cirrhosis of the liver ,caused from having a fatty liver which in turn our liver kidney specialist has told us this will make it harder to lose weight and is the reason James has gained fluid in his body .his kidneys were trying to shut down due to the infection causing his blood pressure to drop very low .He is losing weight again since they have the sepsis under control .we believe when he was hospitalized in September that they had sent him home to early with leg infections of cellulitis.

Since then, it seems there have been several changes in James’ condition. For one thing, a GoFundMe started in his name remains active — and is also the source of the most recent public photo of James K. It looks like Rudi Pijnnaken of Physical Therapy International (to whom James turned at the end of his debut episode) has a hand in the fundraiser; though he didn’t start it, Rudi does appear on the right in the accompanying photo: 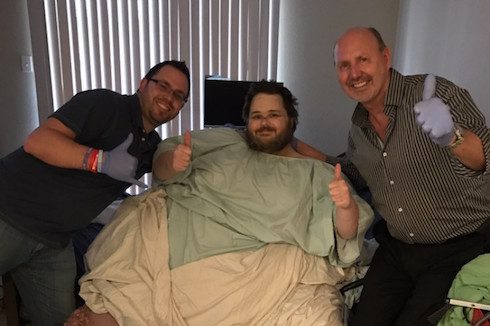 “We are currently looking for help from the community to purchase a Bariatric Trapeze, medical supplies, funds to assist in rent and funds for groceries,” reads part of the explanation. As of this writing, James K’s GoFundMe has raised $170 of its $8,000 goal.

Beyond that, James father’s Donald recently confirmed that James was able to leave the ICU and return to his Houston home after something of a protracted battle. James “got out of the ICU” unnamed “weeks” after he entered, per a Radar article. Donald claimed that James’ condition “improved a little bit,” but did not elaborate further.

Finally, though James hasn’t updated his social media pages in almost two years, we were able to find out that James’ fiancée Lisa does still live in Houston. So it may be the case that, whether or not James is still affiliated with My 600 Lb Life or being treated by Dr. Nowzaradan, he’s decided to continue his weight loss attempts via Rudi Pijnnaken’s efforts.

You can stream James’ first My 600 Lb Life episode here; his Where Are They Now? episode is here. Both episodes are available via TLC.