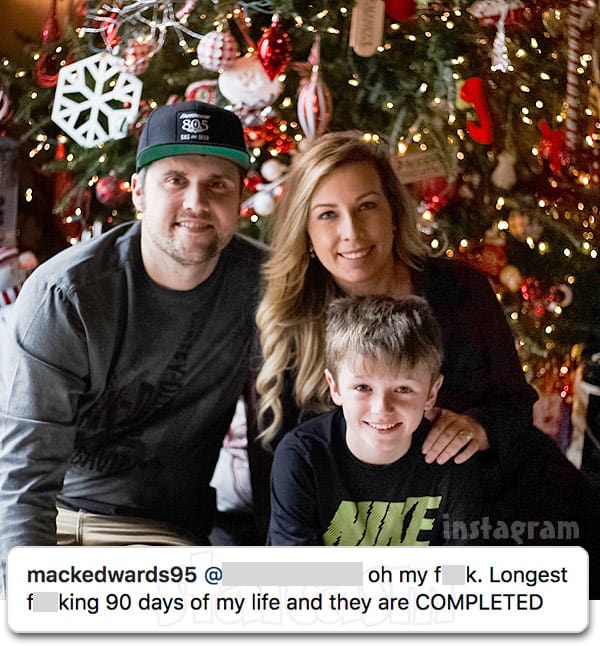 We have some great news to share for Teen Mom OG fans as Ryan Edwards has completed his 90-day stint in rehab!

There was a report on Monday that the 30-year-old reality star was already back home, but his mom Jennifer Edwards debunked those claims. “Ryan is not currently home,” Jen told The Ashley’s Reality Roundup later on Monday. “Ryan will be leaving the exact day he is supposed to which is set by the facility. He is not leaving treatment early,” she clarified.

It turns out that “the exact day” Ryan was supposed to leave was just one day later! Jen spoke with The Ashley again and confirmed that Ryan will be released today. (Update included in the post linked above.)

If you’re curious about the timeline, it was initially reported that Ryan had entered a long-term facility back on October 1. According to the report, Ryan was admitted to a rehab facility in Alabama approximately a month prior — which would line up with his 90-day mark being today. The initial report indicated that Ryan was planning to remain in treatment for 5-6 months, so perhaps that is part of what caused some of the confusion this week about Ryan leaving “early?”

That confusion sparked a conversation in the comments section of the official Teen Mom Instagram account on a preview clip for Monday night’s episode of Teen Mom: Young And Pregnant in which dad Sean Austin failed a drug test. Mackenzie Edwards herself would eventually chime in, seemingly confirming that Ryan has completed his rehab stay:

COMMENTER 1: Speaking of failing drug tests…. Ryan just checked out of rehab. Mackenzie missed thanksgiving with fam so she could pick him up.

COMMENTER 2: is Mackenzie still pregnant?? Was this before the 90 days were up?

COMMENTER 2: ahhhhh okay…maybe he actually did the 90 days then?? They said on the show that he’d miss the pregnancy, and since she already gave birth then maybe the 90 days passed?

COMMENTER 1: maybe..??‍♀️. I’ll have to read it again. But the way they made it sound, it didn’t seem like it. Again I could be wrong. I know the timing of everything is also different and time is flying. So maybe it has been longer than I thought.

MACKENZIE: @Commenter3 oh my f**k. Longest f**king 90 days of my life and they are COMPLETED

Not helping with the confusion is the fact that Mackenzie made her comment Monday evening. ?‍♀️

Regardless of the conflicting reports on Ryan’s EXACT release date, it seems that everyone can agree that at this point Ryan has completed his 90 days in a rehabilitation facility to treat his issues with drug addiction. He is currently out, and if he isn’t home yet, he will be soon.

Congratulations to Ryan! As I’ve stated many times before, we are pulling for him. But, just like his mom and dad talked about on the show, there was no reason for anyone to get their hopes up until Ryan demonstrated willingness to truly commit to being sober — something he had not done until now. I’m so thrilled he gets to be with his newborn son Jagger, and I hope we will all get to see the first photo of the newest little Edwards soon — with his dad.