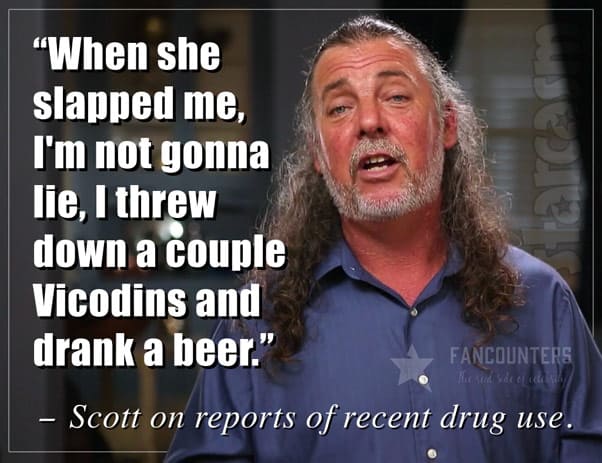 Love After Lockup and Life After Lockup star Lizzie Kommes recently did a couple interviews in which she had some less-than-favorable things to say about her ex Scott Davey, including claims about his drug issues. As viewers would have guessed, Scott was not about to let Lizzie have the last word, so he appeared on the Fancounters podcast to share his side of the story. (The full podcast is embedded at the bottom of this post.)

In addition to responding to Lizzie’s accusations about his drug issues, Scott tackled a wide array of topics — including info on his arrest and the resulting years he spent in federal prison!

I will begin with some excerpts from Scott’s interview with Fancounters host Nick Bailey in which Scott responds to some of what Lizzie said about him, including her claim that Scott used her drug addiction as a way to control her, and that he was upset when she quit.

NICK: So, did you use drugs to keep hold of Lizzie?

SCOTT: That is total false. What she was doing was she was using drugs to control me. Because I fell in love with the woman, OK? I have letters to prove it, where she’s saying basically: “I’m going to leave you if you do not pay my drug debts, if you don’t give me what I want.” So, it’s completely backwards. Why would I get mad if someone stops using drugs? That sounds crazy!

NICK: She says that she believes — it says right here in this interview — that you have a drug addiction. True or not?

SCOTT: OK, OK, this is the deal. Years ago I did. OK? I quit for years! I slipped a little bit a couple years ago. It wasn’t a lot, and that was actually because of her because she wanted me to — well, she had me buy her crystal meth, and I was supposed to give it to one of her friends to sneak in for her. Which that never went through because we got the visitation taken away. So, that was the first time in, like, fifteen years [inaudible]. Yeah, I slipped a little bit. Then I was cool.

SCOTT: I slipped a little bit again. I was all cleaned up when I went out to Wisconsin to pick her up. I was clean since then. And then when she slapped me, I’m not gonna lie — I threw down a couple Vicodins and drank a beer. Because I have had a Vicodin problem in the past from a bad knee, and I was just, like, I was so hurt when she slapped me like that.

#LoveAfterLockup Lizzie wasn't the only one in her relationship who was getting some Love After Lockup – Scott was busted for felony meth possession in 2001! He was also due to be in court today for a $1,400 traffic case. #LifeAfterLockup https://t.co/V2DhgmltJq

After addressing his drug issues, Scott talks about something that he later says Lizzie has been holding over his head: his time in federal prison!

“I did more than a few years federal time,” Scott says, adding that it was “almost as much time as [Lizzie] did.” I will pick up the interview right after Nick asks Scott if the arrest was drug related, like his meth arrest in 2001:

SCOTT: No, it was not drug related in any way.

NICK: OK, So what happened?

SCOTT: I crafted a tool to break into ATMs. That’s the bottom line.

NICK: And so you had been doing this for a while I assume?

NICK: Wowwwwwwwww…So can you elaborate a little bit more on it? I mean, that sounds like for fifteen years it must have been a lot of money. So that would lead me to ask: Where did the money go? And how’d you get caught and all that?

SCOTT: How I got caught? Mmmm, my ex wife, she kind of knew what was going on, but not completely. She threatened if I divorced her that she would turn me into the F.B.I. And she did. And I was thinking, you know, at the end of the day, it could be five or ten years in prison, or life with her. I’ll take the prison. All day long!

NICK: Have you spent this money that you’d been taking for fifteen years?

SCOTT: Actually, I put it in a bank and I lived off the interest. And I gave it all back at the end of the day, except the interest.

NICK: Wowwwww. And these are some of the stories that — well, this is the story that Lizzie has kind of blackmailed you with since you’ve known her pretty much, right?

SCOTT: Um, yeah, you can say that. It’s one of those things, you know? You trust somebody…[she] basically held this against me, and I’m tired of it. So here it is. I’m throwing it out there because someone else is going to throw it out there and it’s going to get all changed around, you know? That’s what I really did.

#LoveAfterLockup #LifeAfterLockup @LizzieKommes is single again & launches her own website! Plus, she appears on the @DomNatiShow & talks about her relationship with Scott while in prison & how Michael tried to slide into her daughter Jazmyne's DMs! ? https://t.co/7zfxxORDtL

The Fancounters episode with Scott is over an hour long, and Scott is featured throughout. Nick is a fantastic interviewer, and he is very knowledgeable about Love After Lockup — both the on-screen drama and the off-screen drama. Scott comes across much as he does on the show, which is sincere and perhaps a bit gullible. (I think he would be the first to agree.) He talks about a wide array of things that fans of the show will find interesting and entertaining.

• Scott says that roughly $60,000 of the $90,000 he spent on Lizzie was to pay for her lawyers, which helped prevent her from spending an additional eight years in prison. Scott says the lawyer he hire charged $1,000 an hour and he had to sell his prized Corvette to cover the cost.

• After Lizzie was released, Scott claims he sent her $10,000, which she told him was going to be applied to an interstate transfer. (I assume this means that Lizzie would make the probation arrangements and relocate to California.) The interstate transfer never happened.

• “When I was 18, I had a girlfriend and she did OD and die right in front of me,” Scott reveals. He doesn’t share much more information about that incident.

• Scott claims that Lizzie cost him his job and at least two other relationships. He also mentions something about a “Squirrel Squad” sabotaging his retail swimwear business by purchasing the swimwear then returning the items and claiming they were used.

• The “meth spoon” that Lizzie found in Scott’s kitchen when she visited him in California was just his grandmother’s 100-year old silver spoon that had tarnished.

• Scott has a new girlfriend that he hasn’t revealed a lot about online yet.

• At a Love After Lockup event in Chicago, Scott was eating from the buffet when security attempted to throw him out because they thought he was a homeless guy.

• Scott once woke up to find a female fan in his bedroom who then told him she was a huge fan as she began to take her clothes off. Scott called the police, and when they arrived, Scott told her they were show producers dressed as police officers and they wanted to talk to her. It worked.

• Scott explains why his teeth seem to go from fixed to not fixed.

• Some of the most memorable scenes with Scott and Lizzie were due to Scott being spontaneous. That includes him tossing her ring in the ocean, throwing money at her in the street, and Scott popping out in the living room completely naked.

#DidYouKnow #LoveAfterLockup star Lizzie went viral long before her appearance on @LuvAfterLockup! Catch up on her pre-@WEtv history before tonight's #OurStory recap special with Scott and Lizzie airing at 10/9c https://t.co/7LzlA9QByP

Near the end of the interview, Nick asks Scott about the possibility of a reconciliation with Lizzie. I assumed this would be Scott’s chance to FINALLY slam the door closed once and for all. But, of course, he left it cracked — if only just a sliver.

NICK: She’s not with Dru any more. What if she gives you a call and says, ‘Hey,” for whatever reason, “let’s work this out.” Are you going to take the bait? 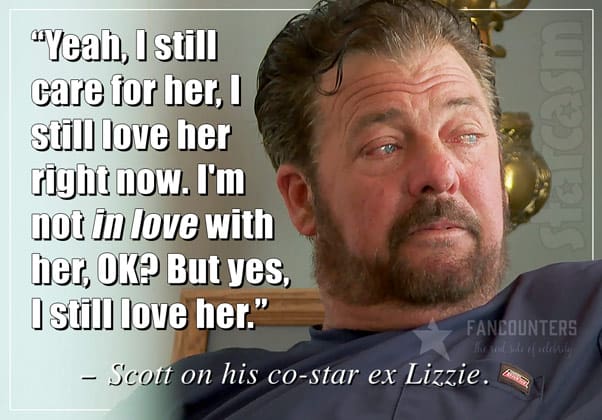 Here is the full episode of Fancounters with the entire Scott Davey interview:

LOVE AFTER LOCKUP Destinie back in prison, tried to sell Shawn’s car on Facebook?