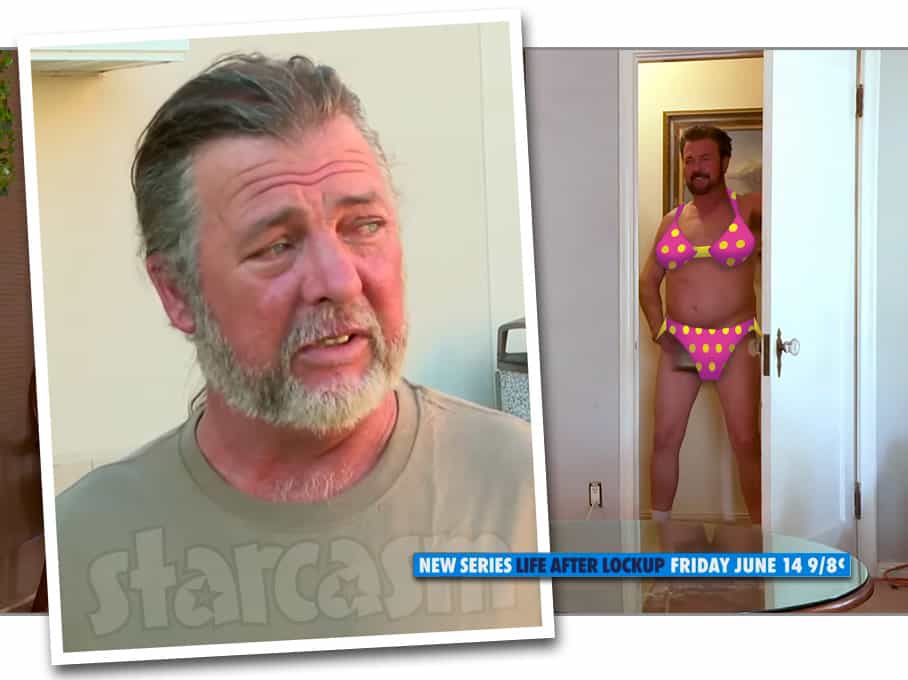 Love After Lockup and Life After Lockup star Scott Davey is looking to capitalize on the fame and exposure from being on the show by launching his own product line. But, instead of something predictable like “Prison Sugar Daddy” t-shirts, hair darkening pomade, or novelty rubber checks that bounce every time, Scott has decided to go with the “sell what you love” mantra with his own line of women’s swimwear.

Scott kind of fell bassackwards into his announcement after he posted a photo of a woman he was having dinner with at Red Lobster last week. The photo was cropped so that all you could see was the lady’s rather large breasts and extremely long fingernails. “Here he goes again. This man loves heartbreaks,” someone commented. “If heartbreak comes with these, break my heart,” Scott replied — seemingly referencing the woman’s breasts, although it could have been the nails or Red Lobster’s cheddar biscuits.

Scott later commented that he was only joking, and he even stated that the woman “paided” for the meal. But, the damage had been done, and the rumors began to fly about who Scott’s young new mystery woman might be.

The mystery was solved three days later when Scott shared a photo of the woman and tagged her Instagram account. (Her name is Chloe and she is a stripper and model from Seattle.) Scott captioned his photo with three blue hearts, but explained in the comments that he wasn’t dating Chloe — she was just a potential model for his new swimwear line: 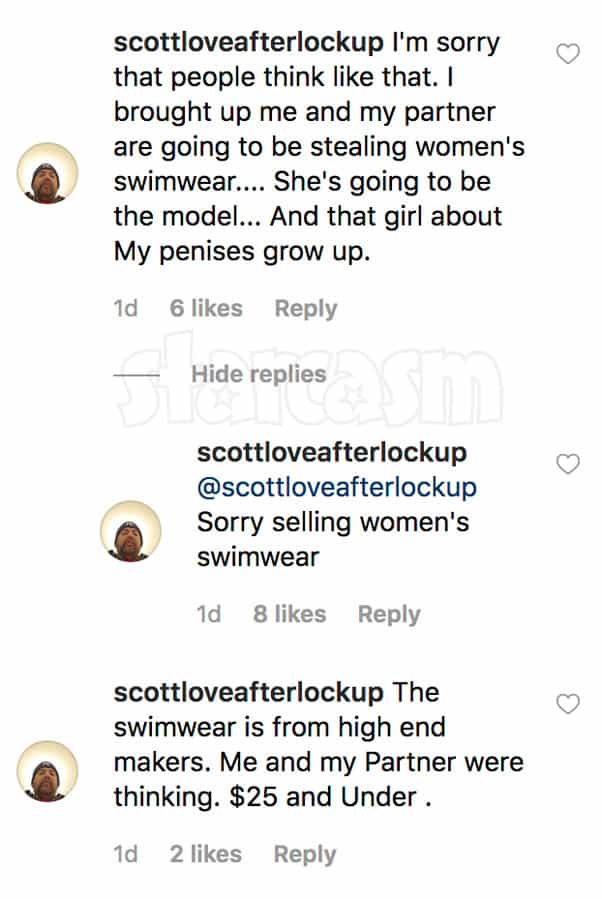 Scott later shared a video to talk about the swimwear line, and to also explain more about the Chloe situation:

“Me and my business partner will be selling women’s swimwear,” Scott explains at the beginning of the clip. “It goes for about $100 in stores. It’s all high end stuff. We can keep it down to around $25.”

He then moves on to the former mystery woman. “Chloe was interested in being one of the models. She was in Los Angeles for the weekend. I showed her around. She’s a very nice young lady. And, I don’t know, people just jumped to a conclusion like I’m dating her or something like that. Which is false.”

Scott gets out ahead of any potential questions about where the swimwear line profits will be going. “The money will be going to me and my business partner, for when people start bringing it up again like they always do.”

The 51-year-old reality star wrapped things up with a glimpse into his plans for the evening. “So, I’m going to go out right now and I’m going to meet women my own age, because I can. Um, do you like this shirt?”

Shortly after that video, Scott posted another clip while broken down in his pickup truck in which he expresses his frustration over some photos someone posted of him that I assume were graphic. I do not know anything about the pictures he is referring to, and I did ABSOLUTELY ZERO research into figuring it out.

Scott does eventually reveal a little more info about the swimwear line. “The company name’s going to be S&L Swimwear,” he says, before adding that it would be up the following day (today). That appears to not be the case — at least not at the time of this post.

It’s unclear who Scott’s “partner” is, but the “S&L Swimwear” name already has many speculating that perhaps it might be Lizzie. Even though the two had a less-than-amicable split, I suppose they might be willing to work together on a business venture. Given Lizzie’s experience making seductive prison outfits, she could certainly create some swimsuits for less than $25! 😂

If it weren’t for the “L” my guess would have been Before the 90 Days star Sean Hiler. Remember, he was the guy who bought his Haitian fiancée Abby all those panties to resell? Since the two fellers have the same reality show production company, I though perhaps they might team up! But, that would have been “S&S Swimwear” — perhaps even “S&S Swimwear and Lingerie.”

We will keep an eye out and try to update this post if Scott’s swimwear line goes live.