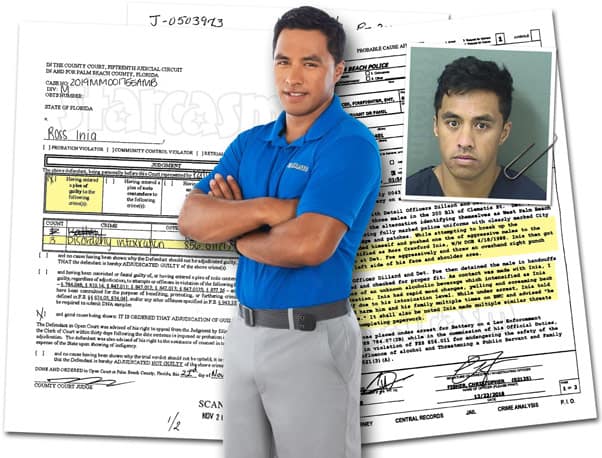 It has become a holiday tradition for a Bravo reality star to head to Palm Beach County, Florida, get drunk, and assault a police officer. The Real Housewives of New York City‘s Luann de Lesseps kicked off the tradition when she slammed a cop’s head in the door and threatened to kill him after she had a few too many drinks and hooked up with a man in the wrong hotel room back in 2017. Below Deck‘s Ross Inia celebrated the one-year Luanniversary in December of 2018 by allegedly having a few too many and punching an officer in the face before also making threats against multiple officers.

Luann was initially charged with three felonies, but she eventually pleaded guilty to three misdemeanor charges as part of a sweet plea deal. Luann was placed on probation before thumbing her nose at the court by not complying with many of her probation requirements. Eventually, the former Countess did complete the terms of her probation, and as a result, she was not convicted of any of the charges.

Ross was also charged with multiple felonies after he allegedly punched an officer who was trying to break up a fight outside a West Palm Beach bar on December 22, 2018. Prosecutors later reduced the two felony counts to misdemeanors.

From our previous update:

Battery on a law enforcement officer was lessened to just misdemeanor battery, and the crimes against person — harming a public servant charge was reduced to a misdemeanor count of resisting an officer without violence. The misdemeanor disorderly intoxication charge remained unchanged.

According to the police report from #BelowDeck deckhand Ross Inia's arrest last week, a heavily intoxicated Ross punched an officer in the face before threatening multiple cops' families and telling one policeman that "he messed with the wrong one." ??‍♀️ https://t.co/3JN54skOLx

After the case dragged out with multiple delays, Ross was in court on November 22 and entered a guilty plea on the misdemeanor charge of disorderly intoxication. Prosecutors opted to not pursue the charges of battery and resisting an officer without violence.

Just like Luann’s case, adjudication was withheld for Ross. Given that it was just the single misdemeanor charge, he was not given probation. He merely paid $338 in fines and fees and was able to walk out of court without a conviction on his record.

If you’re confused as to how someone avoids a conviction after pleading guilty, here is an explanation of withholding adjudication from Orlando criminal defense attorneys Andrew Moses and Jay R. Rooth:

According to Florida’s Statute Section 948.01, if it appears to the court that the defendant is not likely to again engage in criminal activity and that the defendant should not suffer the penalty imposed by law, the court gives great discretion to withhold the adjudication. If the charge was for a felony then the defendant must be placed on probation, and if the charge was for a non-felony, if probation is not rendered, then a fine may be. Once the probation is completed and/or fines paid, there is no adjudication of guilt.

There are many benefits to withholding adjudication. When a judge withholds adjudication, the defendant will not be convicted of the crime. This allows for a defendant to:

• Keep his or her license if it was supposed to be revoked or suspended;

• Answer “No” on job applications when asked if he or she has ever been convicted of a crime;

• Petition the court to seal your record.

I was going to congratulate Ross on his early Christmas gift, but given that the plea deal was November 22, I suppose I should shift up my holiday message and say that it’s pretty clear what Ross was thankful for on Turkey Day!

Now I guess we all just sit back and wait to see what Bravolebrity is going to keep the new tradition alive this year. Feel free to offer up your guesses in the comments or via our social media pages!

I’m gonna go with Jax Taylor. I’m thinking he will have a few too many, then try to relive his outlaw glory days by walking out of a Sunglass Hut with a some shades he didn’t pay for. (Jax, if you’re reading this, I recommend that you contact Andrea from Love After Lockup for some tips on maximizing your sunglass haul!)