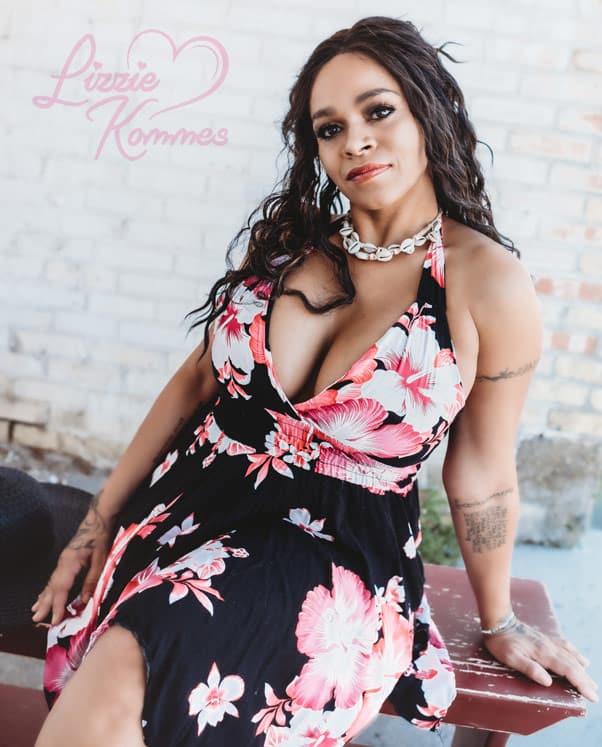 Love After Lockup and Life After Lockup star Elizabeth “Lizzie” Kommes spent almost a decade behind bars, during which time she hustled numerous “tricks” to send her money to feed her heroin addiction — including her future fiance Scott Davey. She and Scott did not have a happy ending, but Lizzie hasn’t let that stop her from successfully turning her life around in a major way after her release.

42-year-old Lizzie is currently a sober full-time college student with a full-time factory job. And just in case that wasn’t enough on this contrepreneur’s plate, Lizzie also has a YouTube channel with more than 64,000 subscribers and she just launched a website featuring her own line of merchandise!

We spoke with Lizzie earlier this week, and she gave us updates on most all of the many things going on in her life right now — including her current relationship status.

In case you missed it, Lizzie revealed back in September that she was dating a hunky younger man named Dru. Lizzie spoke with us at the time and revealed how she met Dru for the first time at a local resort. “I believe it was love at first sight,” she said. “I’m very scared because I think he is my soulmate,” she added.

So what’s the current status of #Drizzie? “He is an amazing guy but I think we went way too fast,” Lizzie tells us. “So we are just friends now.” Unlike her dramatic break up(s) from Scott, Lizzie says that her split from Dru was completely amicable, and she has NOTHING but positive things to say about him:

The truth is the guy is an amazing guy — really too amazing. I’m not used to a good guy, I’m used to pieces of crap who beat me up or abused me. Or men who feed me drugs so I depend on them (Scott). But Dru is nothing like that, and he’s my first sober relationship… I honestly got scared because I’m not used to getting treated so good, and I told him I just wanted to be friends. We still talk and we’re getting to know each other because things went really fast for me.

As far as the non-relationship aspects of her life, Lizzie reveals that she just keep plowing ahead. “I’m still working at Portage Plastics and also going to school full-time. I have two more semesters left and I get my Associate’s Degree in drug and alcohol counseling.”

Lizzie admits that her busy schedule may have contributed to her split from Dru. “Between work and school it’s hard to have a relationship,” she says. “I only get 4 hours of sleep a day. But, I keep reminding myself: AA degree AA degree AA degree.”

As mentioned above, Lizzie recently launched her own website at LizzieKommes.com. The site has information about Lizzie as well as a way for fans to ask her questions. There is also a shop with merchandise, including shirts and mugs with Lizzie’s “It’s all in your head” catch phrase: 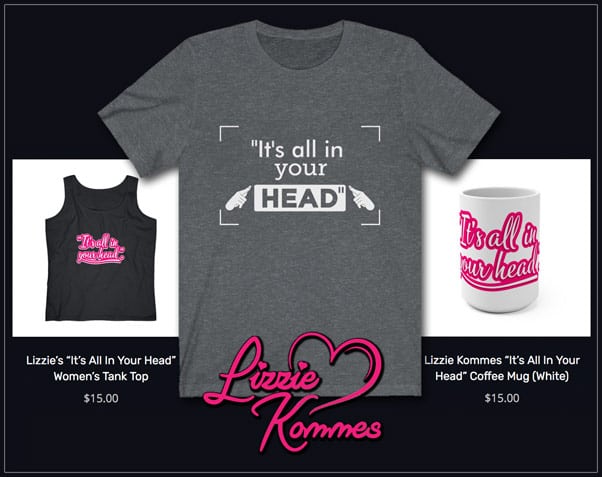 In addition to speaking with us, Lizzie also appeared on The Domenick Nati Radio Show this week. During her interview, Lizzie tackled some of the same topics as far as her relationship and busy life, but she also answered questions about her ex Scott, her time as a prison hustler, and her Love After Lockup co-stars.

Here are some excerpts from her interview, which is included in its entirety at the bottom of this post:

DOMENICK: Does Scott still contact you, and would you ever consider getting back together with him?

LIZZIE: Oh god no! OK, Scott was there for me when I was in prison…The thing about Scott, he kind of used drugs to keep hold of me. And then when I stopped using drugs, he was very upset at me about it. I didn’t realize that he was using at the time. I had no clue. I need to be in a healthy relationship, and that relationship was very unhealthy for me.

D: Does Scott currently have a drug addiction?

[Does Lizzie keep up with Scott at all, including the things he says about her on social media?]

L: I don’t care what he has to say about me because I’m doing amazing. I conquered the drug thing. I have my own website, I have my own YouTube channel, I’m going to college, I’m getting a degree — I’m going really good, you know what I mean? Why would I want that negativity in my life?

D: Scott always said that you went through all of his money and you were a gold digger. What is your side of that story?

L: OK. Domenick, put yourself in prison. You have no family any more. They’re…all ashamed of you and won’t talk to you. you have no way to get money in prison, right? You have no way to survive. Prison is not free. Everybody thinks prison is free — it’s not. And then you become a heroin addict while you’re in prison. And so now you’ve got this habit that you’ve got to feed every day. And then, the first time I talked to Scott, because I was on Meet An Inmate — that was my hustle to get my drugs, you know?

#LoveAfterLockup Check out one of Lizzie's prison dating profiles as well as details on some of her online fundraising campaigns, which often claimed to be raising money for her daughter Jazmyne: https://t.co/AMJqyy647n

L: So I was on Meet An Inmate, and the first night I talked to Scott, because I had an illegal cell phone of course, he gave me a thousand dollars. I asked him if I could get a thousand dollars, he said, “Sure, no problem.” I didn’t put a gun to this man’s head. I was in prison. I was locked up behind bars, you know? I didn’t play no games on him, I told him the truth. He knew about all my other tricks. I told him everything. I thought he was the one because he accepted my drug habit, and he accepted the fact that I had other tricks, you know what I mean? He accepted everything. So I thought he was the one, you know? I didn’t lie to Scott. I didn’t lie to Scott not once. I told him everything from the start.

D: Which Love After Lockup cast member is your least favorite?

L: Really? You’re going to put me on the spot like that? [Laughs] It’s so unfair! My least favorite? I don’t know — do I have a least favorite? [Has a revelation] You know what? Michael. There you go. Yep. Sure is. He tried hollering at my daughter while he was doing an interview! So yeah, he would be my least favorite.

D: He was trying to talk to her?

L: He was doing an interview and he was, like, “Jazmyne, hit me up on Instagram, blah, blah, blah.” I’m, like, “Are you serious? Seriously? Really? No. And you have, like, two women! Like, do you need another one in your life? No.”

D: Which Love After Lockup star do you believe is the least trustworthy?

L: Michael. Yeah, come on now! Are you serious? He lies all the time!

As promised, here is the full Lizzie Kommes interview on The Domenick Nati Radio Show, which includes A LOT more from Lizzie, including her favorite Love After Lockup couple, her explanation for her famous “It’s all in your head” catchphrase, and her thoughts on the most recent season of Love After Lockup: