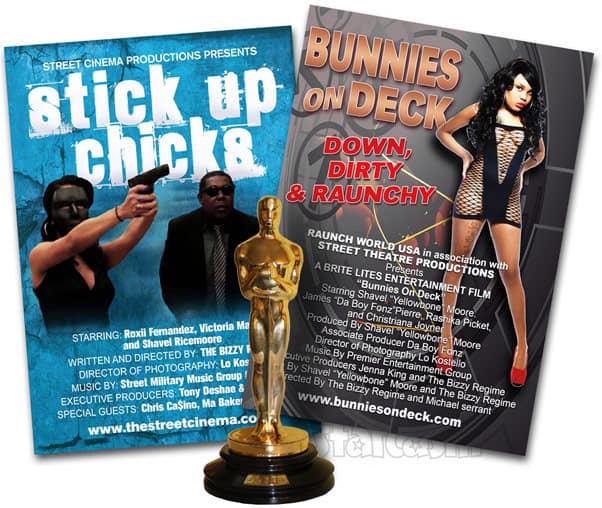 We previously reported that Love After Lockup star Shavel Moore raps under the stage name of YellowBone, but did you know that she is also an actress?

The 31-year-old had a featured role in at least two projects. In 2013 she starred as sex trafficker Sheeba in Bunnies On Deck, alongside her on-screen street pimp beau Money. It appears as though the short film was shot in Brooklyn in 2012, which was right around the time that Shavel and her family were featured in a New York Times article after they got duped by a music producer that lured them to New York City and then ghosted them. (Link above.)

Here’s the official Bunnies On Deck synopsis from IMDB:

Lured by the promise of being a model, Princess is held against her will by Money and his female partner Sheeba. The couple changes her name to passion and force her into the sex trade. Does Princess have the strength and courage to break away?

Here’s another synopsis from the film’s now defunct website that reveals a little more about the plot:

Money, a Brooklyn street pimp, lures young women into a life of sex, money, & drugs. He is the ‘go-to’ pimp with all the bunnies on deck.

Ultimate fallouts with his ‘bottom b*tch’ (Sheeba), and his number one earner (Passion), subsequently leads to his demise, and creates window of opportunity for others to step up to the plate and take over the game.

In addition to having a starring role in Bunnies On Deck, Shavel is also credited as one of the two writers and as an executive producer. But that’s enough talking, let’s get to some actual video!

We will start with the official Bunnies On Deck trailer:

Here’s an audio-only radio spot. I’m not sure if that is Shavel’s voice:

But why just tease our readers when we can provide Bunnies On Deck in its entirety? Here you go:

A couple years after filming Bunnies On Deck, Shavel got in front of the camera(s) yet again for Stick Up Chicks. In this crime drama, Shavel takes on the role of Charlotte James, a college graduate with career problems who decided to get a job they don’t offer majors for.

Here’s the Synopsis from the producers:

In recessionary times, desperate times calls for desperate measures. Charlotte James is recent college graduate who is having work issues. Her and her roommates Nina Rodriguez and Sonia Sanchez decide it’s time to get this money by any means necessary.

Just as before, I will tease with a couple preview trailers. In the first, the three stick up chicks decide to rob a slat-walled purse store. (That’s Shavel in the blue mask actually gettin’ the $$$)

After the stick up, the ladies return to their residence and divvy up the booty. But, just like physically, Charlotte has a bigger booty than the rest. Stick up chick tension ensues:

Still not enough Shavel thespianage for you?! Here’s Stick Up Chicks in its entirety:

The production company teased a Stick Up Chicks 2, but I don’t believe it ever came to fruition.

I will send you off with Shavel’s music video for the song “Beez in the Trap Remix” from Bunnies On Deck. Once again, there is A LOT of adult language, so be forewarned!

There’s another Shavel music video promoting Bunnies On Deck, but it pretty much shows her having sex, so I didn’t want to embed it here. Just click the link to check out Shavel’s grind game.

New episodes of Love After Lockup air Friday nights at9/8c on WE tv!