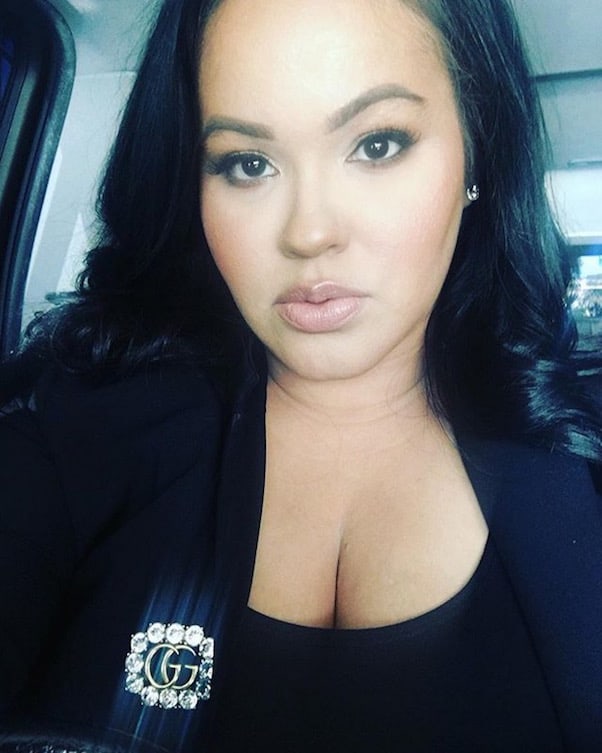 If you’ve been getting frustrated waiting for fresh tea on the new Basketball Wives season, break out a smile! Your wait is officially over — and what’s coming is *piping* hot. The Liza Morales Basketball Wives rumors are true: Lamar Odom’s pre-Khloe ex is set to join for Season 9. But that’s not all she’s bringing…

Shortly after the news broke, Liza took to Instagram with an eye-opening warning for her baby daddy. It seems Lamar might not be as forthcoming with tuition money for his eldest son as Liza would like — or, to hear Liza tell it, as Lamar has promised.

As first reported by The Blast, production for Basketball Wives Season 9 is set to resume. There will allegedly be three new cast members this year. And it looks like Liza Morales is the headliner.

Morales is no stranger to reality TV. The 41-year-old was a cast member on the short-lived TLC series Starter Wives Confidential back in 2013.

She shares two children with Odom: Their daughter Destiny, 22, and their son, Lamar Jr., 18.

The pair also had a son, Jayden, born at the end of 2005. Unfortunately, Jayden died of SIDS the following June, at just six-and-a-half months of age.

Because of her history with Odom, Liza Morales is also no stranger to tabloid drama. The pair were a hot item in LA gossip circles back in the early 2000s. And after Lamat left Liza for Khloe Kardashian, the contrast in the two relationships made for plenty of headline fodder.

Liza Morales and Lamar Odom drama may be heating back up

Per the aforementioned Blast report, the entire Basketball Wives main cast will be coming back. Despite that, though, it looks like the new drama between Liza Morales and Lamar Odom might be one of the new season’s biggest plotlines.

Shortly after the news of Liza joining the cast broke, she took to Instagram Stories with an apparent ultimatum for Lamar.

In the first segment, Liza offered an unattributed quote. By context alone, the quote would appear to be from her baby daddy Lamar. “Aah babydoll,” it reads. “I am willing to be the best possible man for our family.”

After that, Liza offers some skepticism — and then a picture of a defiant Rihanna with two trash bags, captioned, “Take The Trash Out.” The implication should have Basketball Wives fans giddy with anticipation.

We’ve taken the four separate images and paired them for ease of scrolling 😉 Here’s the first two segments of Liza’s IG Story calling out Lamar: 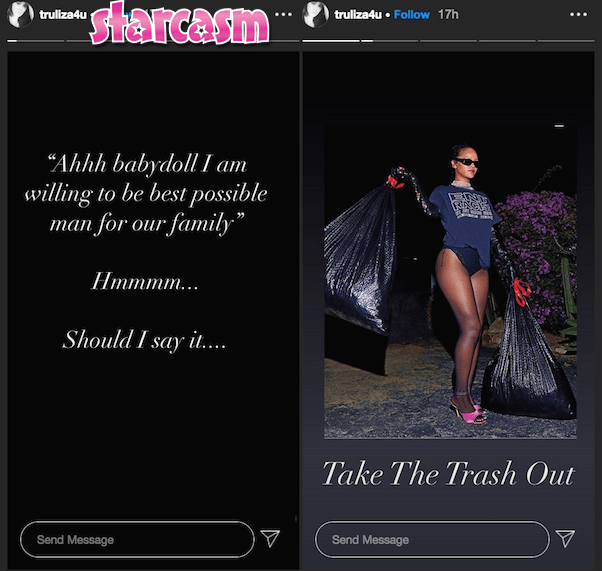 After that, Liza asks, “Get to the Real … Where is LJ’s College Money??! We have been asking for it…” Lamar Junior, as we noted above, turned 18 this year — the traditional age of a college freshman.

Even if he’s taking a COVID gap year, Lamar will likely be off to college by this time next year.

And the final snap in the sequence s a screengrab from the Urban Dictionary definition for “mama bear.” The implication is pretty strong: If Lamar Sr. doesn’t pony up with the promised cash, Liza will use her brand new reality TV platform make sure he gets dragged worse than he did during the Khloe breakup.

Here’s the second pair of images: 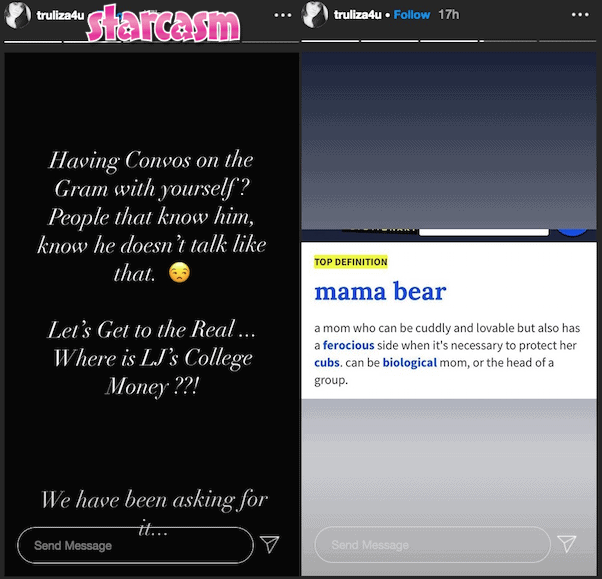 Basketball Wives‘ new season now appears likely to begin shooting around the end of the year or the beginning of 2021. Given that timeframe, we should see plenty of gossip by early next year, and a Season 9 trailer by next summer at the latest.