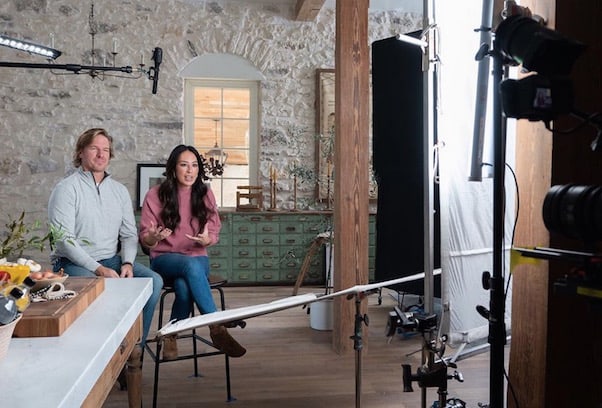 If you weren’t already, you can let yourself get excited. The last few weeks have seen a slow, steady drip of news about Magnolia Network, the Gaines’ newest venture. But now we’ve gotten confirmation about the real deal: Chip and Joanna’s new show, which appears to have started production in earnest.

To say that anticipation for the recently named Magnolia Network has been high ever since the former Fixer Upper stars announced it would be an understatement. Their decision to pull the plug on the show that made them household names when they could have easily let it run for another decade (at least) continues to be shocking. And, although Fixer Upper reruns continue to air, the Gaineses haven’t filmed a new episode — or been on TV with anything other than reruns and talk show appearances — for nearly two years.

In that time, though, we’ve learned quite a bit more about the contract details that led Chip and Joanna to quit HGTV in the first place. And the couple has pointed out at every turn that while they’re curating their own TV network, Chip and Joanna’s new show would also be that network’s flagship program.

So: after all that preamble, here’s the social media post to get happy for. The man responsible is Michael Matsumoto, Fixer Upper‘s longtime producer; the blurred-out bits should speak for themselves:

But, just in case they don’t 😉 what you’re looking at is a laid out filming schedule. The man on the left is Rob Zimmerman, another Fixer Upper producer. And the hashtag #gettingthebandbacktogether should need no unpacking.

However, any Fixer Upper-style show that Chip and Joanna host will only be part of their Magnolia Network presence. Joanna has already announced that she’s going to star in a cooking show; there were also “cameras present” when she met Fixer Upper superfan Jennifer Lopez last year, and plans are developing regarding that footage (plus potential future celebrity collaborations).

Said Discovery spokesman John Marsciano, who is also a spokesman for the Gaineses, “They [Chip and Joanna] will be seen in numerous places and felt in every aspect. Their DNA is weaved throughout the network.”

Wahlburgers Season 5 preview: Where is the family going next?