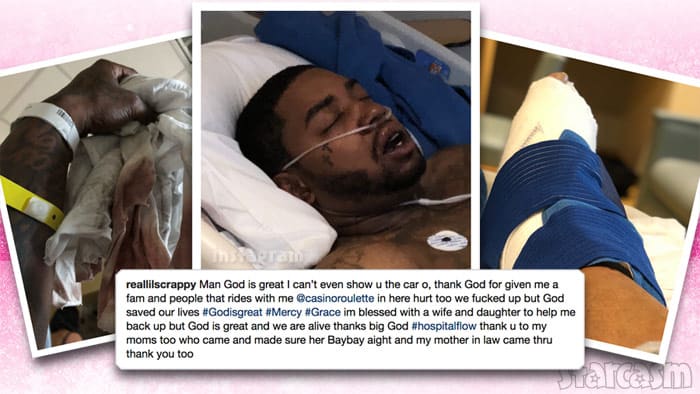 Love and Hip Hop: Atlanta star Lil Scrappy is lucky to be alive after being involved in a horrendous crash in Miami over the weekend. The reality star shared a gallery of photos from the hospital, where he woke up without knowing how he got there.

“Man God is great,” Lil Scrappy captioned the gallery. “I can’t even show u the car,” he added, before expressing his gratitude for those with him. “Thank God for given me a fam and people that rides with me,” he wrote.

TMZ spoke with sources close to Lil Scrappy and they say that the accident occurred early Sunday morning after Lil Scrappy and his friend, Ca$ino Roulette, were leaving the Miami strip club King of Diamonds. “We’re told Scrappy believes his buddy fell asleep at the wheel, however cops list Scrappy as the driver in the crash. Either way … they slammed into a pole, totaling the car,” the site reports.

The police report from the accident states that both Lil Scrappy and Ca$ino Roulette were found on the ground when officers arrived on the scene. “Neither could coherently explain what had happened,” TMZ says. “The report also notes there were no witnesses … and no citations issued. Cops say the car was probably driving too fast for the conditions.”

Here is the gallery of photos as posted by Lil Scrappy:

Man God is great I can’t even show u the car o, thank God for given me a fam and people that rides with me @casinoroulette in here hurt too we fucked up but God saved our lives #Godisgreat #Mercy #Grace im blessed with a wife and daughter to help me back up but God is great and we are alive thanks big God #hospitalflow thank u to my moms too who came and made sure her Baybay aight and my mother in law came thru thank you too

I looked up the King of Diamonds strip club in Miami, and it appears as though they had an “After Party” hosted by NFL receiver David Clowney on Saturday noght:

I wasn’t able to find any photos of Lil Scrappy or Ca$ino Roulette from that night.

We wish Lil Scrappy and Ca$ino a speedy recovery!

PHOTOS How much plastic surgery has K. Michelle had? Complete list of procedures and results