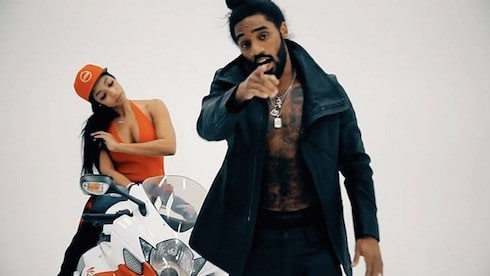 One of the biggest multi-season storylines on Love & Hip Hop Atlanta is the Season 5 imprisonment of new cast member Scrapp DeLeon. Scrapp was originally sentenced to 20 years behind bars on a drug trafficking charge, and gave himself up to begin his sentence last March. Given the dramatic nature of his on-camera surrender to Georgia state authorities, it’s no wonder LHHATL viewers are wondering: Is Scrapp DeLeon out of jail?

Fortunately for the show’s fans as well as Scrapp’s, there’s a bit of good news to be had regarding the man’s sentence. According to current Georgia Department of Corrections records, a string of other factors in Scrapp’s case have shortened his sentence by approximately 75%. Barring a lapse in his good behavior, Scrapp should become a free man in January of 2021–and not in 2036, as was originally expected.

Additionally, Scrapp was transferred to a new facility last summer, as his brother Sas shared at the time. Scrapp had been serving his sentence out in Taliaferro County, which is where Scrapp was arrested with “a LOT of marijuana” in his car. (The exact amount hasn’t been disclosed, but Scrapp was sentenced based on inclusion in the “10-2000 pound” category of the state’s sentencing guidelines, so his trunk was pretty full at the time of arrest.)

Since then, he’s been moved to Macon State Prison in Oglethorpe GA. Devoteés will recall that Scrapp’s real name is Will Cortez Robinson; if you’re interested in sending him any care packages or fan mail, make sure it’s addressed to that name, and not Scrapp DeLeon.

Finally, here’s the most recent prisoner info on Scrapp, from when he was transferred from Taliaferro to Macon County. The new mug shot is believed to be the most recent public photo of Scrapp–it was snapped last May. 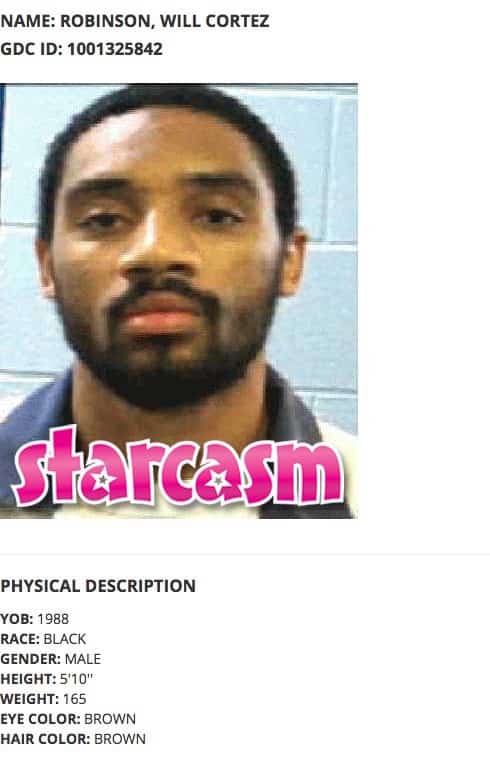 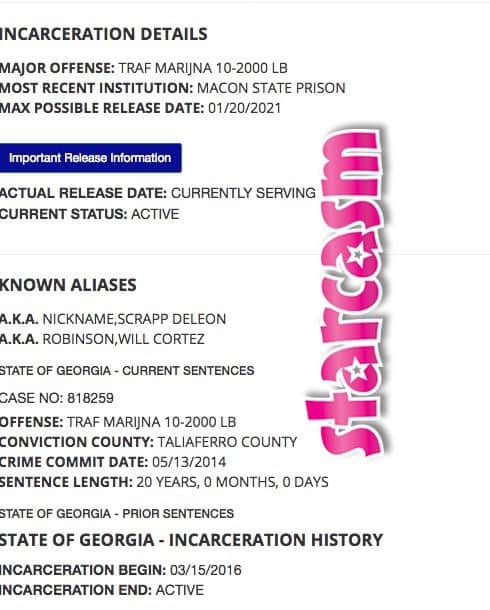 Scrapp hasn’t updated his official Instagram page in awhile–or had it updated by friends on the outside–but you can follow him here. His most recent communication came when he repped Sas’ official Pandora station at the end of February:

@SASNBL4Life has his own Pandora station! Be sure to hit that thumbs up when you gettin litt to SAS Radio!… https://t.co/3GI2BYgNex

(Photo credits: Is Scrapp DeLeon out of jail via Instagram, Georgia Department of Corrections)