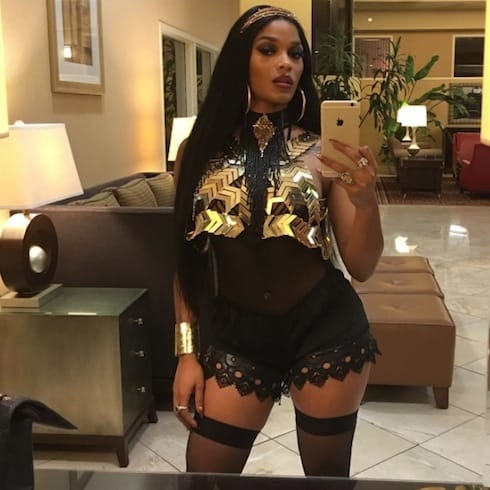 Are Stevie J and Joseline getting married? The idea seems less likely than ever, thanks to both of the Love & Hip Hop Atlanta stars appearing to confirm, in separate mediums, that their relationship is all but over. According to Stevie J and Joseline themselves, he’s already moved on and is looking for a fresh start, while she alleged that Stevie has jealousy issues, and couldn’t handle Joseline’s partying ways.

Rumors about Stevie J and Joseline getting married, having a baby, breaking up, and / or having another screaming argument have been ongoing pretty much since the end of Love & Hip Hop Atlanta Season 4 and the announcement of their spin-off Stevie J and Joseline: Go Hollywood. In the last three months alone, Stevie J accused Joseline of starting a fight with him and bleaching over $40,000 of his clothes while in a drunken rage; Joseline and Stevie both accused each other of rampant infidelity; Stevie then said he and Joseline were trying out a separation, which she asked for when he called her a ho; finally, just as Love and Hip Hop Atlanta Season 5 began airing, Stevie J and Mimi Faust found themselves dealing with rumors that they had gotten back together.

Joseline’s recent appearance on The Wendy Williams Show was one of the first times that she’s told her side of this story. “Well, we are together,” Joseline said, after taking a deep breath; “[but] he took my ring off….He went after Rick Ross [who posed for a picture with her]; he went after The Game. He goes after all these people, and, you know, we’re separated–we’ve been separated for six months.

“I love my husband,” Joseline continued, “and he’s a great guy, but he’s fifteen years older than me.” [Joseline says she is 29, which jives with Stevie J’s birthdate of November 2, 1971.) “And he’s so controlling….He wants to have me like a little puppet master.”

However, judging by some recent tweets, it looks like Puppet Master J may have moved on for good. Stevie J shared the following message this weekend, shortly after Joseline’s Wendy Williams appearance: 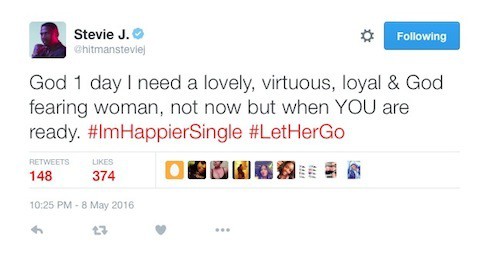 It didn’t help that, earlier the same day, Stevie put out a call for “new young fresh female talent,” which many observers took to mean something rather explicit:

(Photo credits: Are Stevie J and Joseline getting married via Instagram)