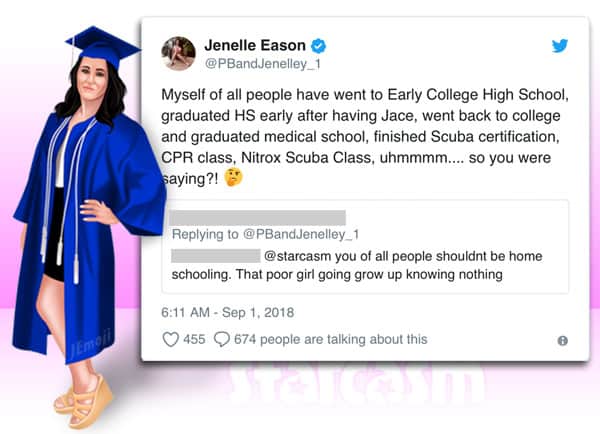 Teen Mom 2 star Jenelle Eason got the Teen Mom 2niverse all abuzz this week when she revealed that she and husband David Eason are homeschooling his 11-year-old daughter Maryssa after they officially filed the paperwork with the state of North Carolina back in March.

After biting her social media tongue for roughly 24 hours, Jenelle finally responded to those questioning her ability to provide a proper education for Maryssa on Twitter. Jenelle’s initial comment came in response to a tweet sharing our post about Maryssa’s homeschooling: 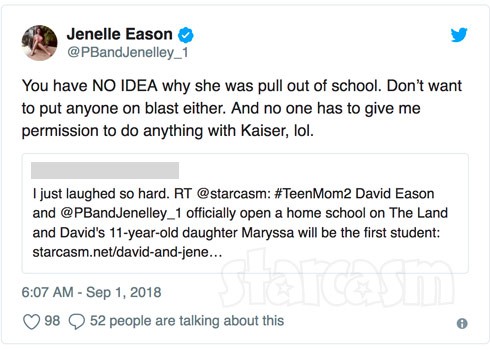 Earlier today, Radar Online spoke with an “insider” who claims that the reason Maryssa was removed from the private school she was attending is because “someone at her school was apparently dressing, or dresses like a girl.” The article clarifies that the “someone” is “a cross-dressing staff member” and not another student. “David said something to the school staff and they said they couldn’t do anything about it,” the source adds.

David attempted to enroll Maryssa in another private school, but was apparently denied due to their address being outside the school’s zone. Without a private school option, the source says Maryssa “would have to go to the public school for their address, which David feels she’s too good for.”

As most Teen Mom 2 fans are well aware, David has made his stance on gay and transgender people VERY clear. In his infamous homophobic tirade that eventually got him fired from the show, David was asked: “Are you going to teach your children to hate gay and transgender people?” David responded: “No, Im going to teach them not to associate with them or be that way… If you lay down with dogs you get up with fleas.” The person who asked the question responded in part by hoping that God has mercy on David’s soul. “God will have mercy on me,” David tweeted back, “but not those who are an abomination.”

OK, back to Jenelle’s tweet. The latter part of her comment about not needing “permission to do anything with Kaiser” was in response to speculation in our post that they might not be homeschooling Kaiser because his dad Nathan (or grandmother Doris) would have to sign off on it. Apparently that is not the case.

Jenelle responded to the same tweet again by writing “Well damn thought kaiser went to daycare all day… not school? Which one is it?! ???‍♀️” I’m not sure what this is in reference to. We stated in our post that “the home school filing was only for a single student, and Jenelle posted earlier today that it was Kaiser’s first day of school, suggesting that he is not being home schooled.” We embedded Jenelle’s Instagram photo of Kaiser along with her caption that included “Another school year!” as well as the #SchoolDays hash tag. ??‍♀️

Another Twitter user responded to the same tweet by writing: “you of all people shouldnt be home schooling. That poor girl going grow up knowing nothing.” Jenelle responded by sharing her teaching resume:

Myself of all people have went to Early College High School, graduated HS early after having Jace, went back to college and graduated medical school, finished Scuba certification, CPR class, Nitrox Scuba Class, uhmmmm…. so you were saying?! ? https://t.co/J3rEpoUcKh

So what do you think, was the internet selling Jenelle short on her ability to be a primary home school educator for Maryssa?