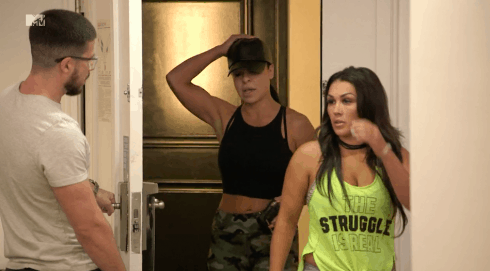 Last week’s episode of Jersey Shore ended with Ronnie opening up to his castmates about his troubled relationship with his baby’s mother Jen Harley. He broke down in tears as he revealed that he felt she may keep him from seeing his daughter. The situation ends with a brutal confrontation between the two of them. Are they still together after such intense drama?

Where are you going, @RealRonnieMagro?! ? Find out what’s happening on an all-new #JSFamilyVacation tonight at 8/7c on @MTV!

The tension ramped up with the episode from this past Thursday when Jen Harley unexpectedly showed up in Las Vegas. Before she showed up, however, Ronnie had actually left the hotel they were filming at after having a heart-to-heart with the group and even the show’s producers. Pauly D explained that he had had similar issues with the mother of his baby, but Ron insisted that his situation was more dire. A decision to find Ronnie a good family lawyer was made and it all got too intense for him so he decided to leave.

While Ron was gone, Jen showed up and the rest of the cast didn’t know what to do. She aid Ron was texting her in a “rampage” and calling her names.

Things got a little too real on #JSFamilyVacation when Jen showed up unexpectedly looking for Ron! ? Watch the full clip on @jerseyshore TW or FB.

Later, the two do end up in the hotel together, and of course things get heated. Ronnie tells Jen she’s driving him crazy and using their child as a pawn again him, and Jen counters by calling him a psychopath, a loser, and a piece of sh!t. She then spits in his face.

The situation gets so dire that a security guard steps in to prevent something worse from happening – and the video cuts off abruptly.

Meanwhile, while all of this is airing on TV, Ronnie posted on social media about how he now thinks completely different about his family’s situation than he did three months ago when this footage was filmed. Despite all of their past conflicts, which include an arrest and fighting on an Instagram livestream, Ron and Jen have been posting depictions of a happy home on social media for the past few months. 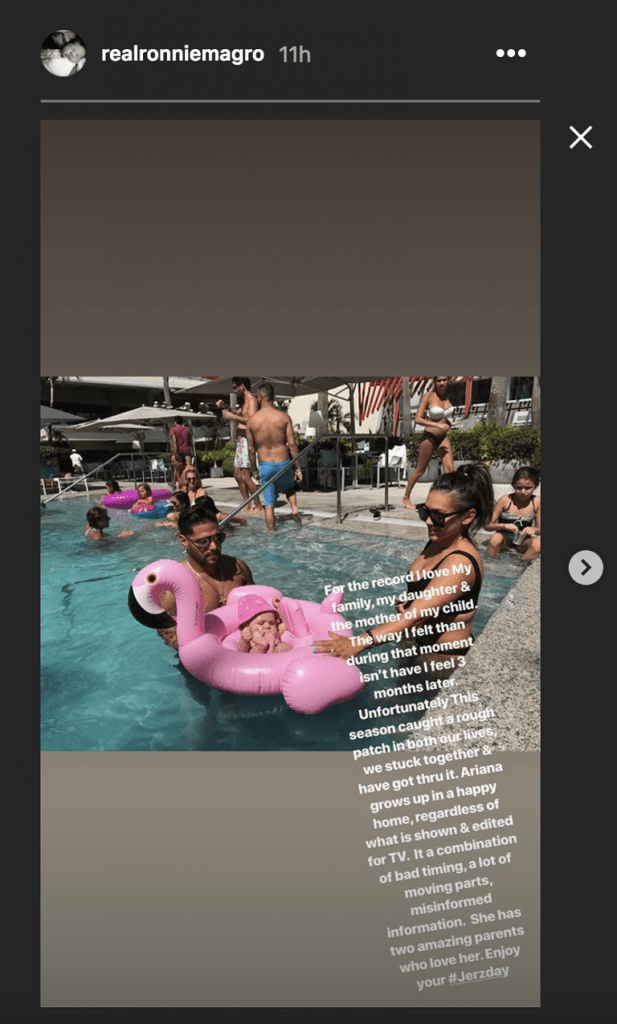 “For the record I love My family, my daughter, and the mother of my child,” Ronnie wrote on his Instagram story Friday on top of a picture of the three of them in a pool. “The way I felt [then] during that moment isn’t the way I feel 3 months later. Unfortunately this season caught a rough patch in both of our lives, we stuck together and have got thru it. “Ariana grows up in a happy home, regardless of what is shown & edited for TV. It a combination of bad timing, a lot of moving parts, misinformed information.”

PHOTOS Khloe Kardashian gets close with The Game at the club

Lisa Vanderpump fights claims she is the new RHOBH villain