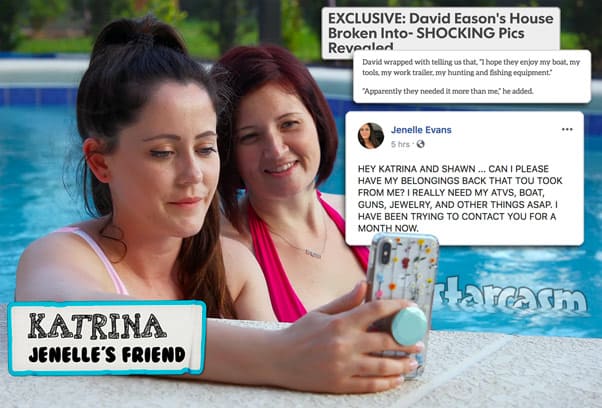 Former Teen Mom 2 star Jenelle Eason announced her split from husband David Eason back in October, explaining that the end of the marriage was what was “best for me, and for my kids.” She filed a restraining order against David, citing multiple instances of alleged abuse and his very serious anger management problem. “David does not currently know where I am, but once he learns I’m afraid he will try to come find me and hurt me,” Jenelle stated in the filing.

The break up seemed to have extremely positive results for Jenelle, son Kaiser, and daughter Ensley. At Thanksgiving, Jenelle stated that she was “thankful for the amazing kids I have and grateful for finally finding happiness within myself.”

However, David would eventually learn that Jenelle was staying in Nashville, and the two arranged for him to be able to see Ensley. While David was away from The Land, he revealed that someone had broken into his house and stolen all kinds of stuff. “When I arrived home on November 27th from Nashville Tennessee I immediately knew my house had been broken into. I changed the locks before I left,” David told Champion Daily. “So whoever broke in had to break in the back door which apparently they had previous experience with.”

David shared a frustrated message for the thieves. “I hope they enjoy my boat, my tools, my work trailer, my hunting and fishing equipment. Apparently they needed it more than me.”

As those who have been following Jenelle over the past few months are well aware, she eventually decided that what was “best for me, and for my kids” wasn’t really what she wanted as she eschewed “happiness within myself” to drop the restraining order and return to her chaotic and unhappy life on The Land with David.

Jenelle and David have been trying to get back to life as usual, and that includes getting the stuff back that was stolen. As it turns out, the “thief” did have “previous experience” with the back door of their house because it appears to have been Jenelle’s friend Katrina?!

There were numerous rumors online that the “break in” on The Land was actually arranged by Jenelle to remove valuables from the property while David was away. That rumor seemed to be supported by the fact that none of the diligent hatter investigators were ever able to uncover a police report regarding the break in and theft. () Earlier today it seems that Jenelle and David are all but confirming the rumor as Jenelle pleads with her friend to get their stuff back!

Here is a message posted by Jenelle on Facebook earlier today:

HEY KATRINA AND SHAWN … CAN I PLEASE HAVE MY BELONGINGS BACK THAT TOU [sic] TOOK FROM ME? I REALLY NEED MY ATVS, BOAT, GUNS, JEWELRY, AND OTHER THINGS ASAP. I HAVE BEEN TRYING TO CONTACT YOU FOR A MONTH NOW.

Jenelle made the post on the page for a local jewelry repair shop that appears to be run by Katrina and/or her husband Shawn.

As Jenelle was posting her plea for the return of the Easons’ property, David was sharing negative feedback for the jewelry repair shop on his Facebook wall. At the time of this post I counted ten different negative reviews shared by David.

UPDATE – We asked Twitter user @ustacould (aka Roux), who has a proven track record of knowing exactly what is going on behind-the-scenes on the Land, what was up with the report that David had filed some sort case against Katrina in court. I was erroneously under the impression that it had something to do with the cat that David says Katrina took and was then eaten by her dog, but that doesn’t appear to be the case. From Roux:

Nothing about the cat, he pressed charges bc the stuff Je asked Katrina to go get for her, Katrinas not giving the stuff back. David’s just being his usual sick games self and claiming she fed the cat to her dogs just to get attn and start shit up. He’ll never change

I don’t know if it’s related, but Katrina shared a gallery of images of her family having fun on November 29 (two days after David returned to the Land and discovered the missing items) along with the following caption:

Surprise Day 2019, we surprised all the kids with their own four wheelers and kayaks   for our lake on Saturday we have Hidden all the presents   on all the trails and all over the 38 acres for them to find on their four wheelers  ….they (my nephews too ) had a Blast and were truly surprised ????? #family #surpriseday2019 #happykids #weloveournewhouse

For those of you who don’t recognize Katrina’s name, she was featured during Jenelle’s last season of Teen Mom 2. After producers informed Jenelle that they could no longer film on The Land or even in the state of North Carolina because they needed to be hundreds of miles away from David in order to feel safe, they arranged for a random trip to Orlando so that Jenelle could film with her co-star Briana DeJesus. Jenelle was also fighting with her mother Barbara Evans at the time, so she took Katrina along.

Who wants a front row seat to all the inevitable drama between recently reconciled #TeenMom2 couple Jenelle & David Eason? 10 acres across the street from #TheLand is for sale! We propose a theme park called The Landland & include a list of ideas for it! https://t.co/8HegrvLKmM

From our post about Jenelle’s trip at the time:

While the DeJesus family spent time recovering, Jenelle enjoyed the Florida weather by spending some quality pool time with her “bestie” Katrina, who made the trip to Florida with Jenelle…

MTV is certainly in a very difficult situation with Jenelle. She is undoubtedly the show’s biggest star, as far as generating publicity and ratings, so they certainly want to keep her on the show. But, they are literally running out of human beings that Jenelle can film with! Briana is sort of being taken advantage of in that she is now the show’s go-to flex person for boosting the story lines of other cast members.

(On a side note, am I the only one disappointed that we didn’t get to see this co-star bestie trip happen the other way with Briana and her daughters visiting The Land for a few days?)

I’m guessing that MTV got caught off guard by Jenelle and Barbara’s recent falling out, although they should have known that was going to happen with what Barbara told them on camera. So, MTV decided to stage this trip to Florida and had Jenelle bring her “bestie” Katrina along so that she could become the new person Jenelle has lunch with to discuss what’s going on in her life once they return home.

UPDATE – Jenelle responded to our Instagram post about this article to clarify that she and Katrina have been “friends for years.” I just wanted to make sure there was no confusion there!

#TeenMom2 @MTV seems to be running out of people for @j_evans1219 to film with, so she flew down to Florida to film with co-star @_brianadejesus. And Jenelle brought her "bestie" Katrina with her – will that be her new filming partner when she gets back? Visit Starcasm.net (site link in bio) for the latest on the #Brinelle reunion! [updated to remove “new” bestie and correct Katrina’s name after Jenelle’s comments]

Getting back to the present, Katrina has yet to respond to Jenelle’s plea to return her stuff.

UPDATE – I forgot that David stated that it was Jenelle (or another “ex) who took the items in response to someone asking if he filed an insurrance claim:

This was David’s comment on it at the time. Also Idt you can file an insurance claim with out a police report pic.twitter.com/xj6x2sbRz0