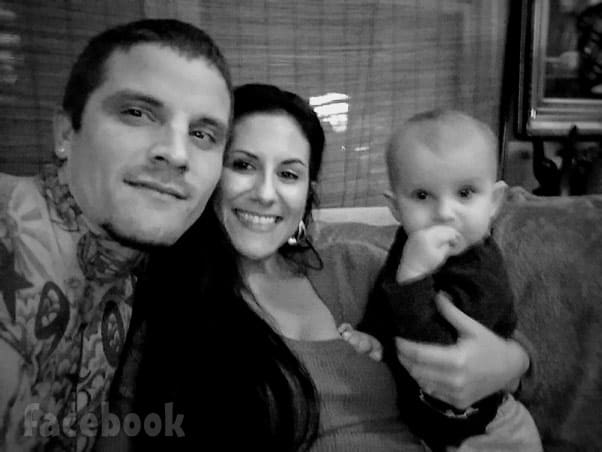 Jenelle Eason’s ex-husband Courtland Rogers is a free man once again! According to jail records, Courtland was released on March 6 after serving more than six months for assault on a female — his fourth arrest of 2018.

33-year-old Courtland jumped right back on social media where he shared a series of photos of his 11-month-old son Camryn Kruze and his wife Lindsey. The photos with Lindsey are especially significant because Courtland’s arrest in August of last year was due to an alleged altercation with her.

For that arrest, police had probable cause to believe that “Courtland had brutally attacked a woman named Lindsey Frazier on Sunday by allegedly slapping her, dragging her by the hair and pulling her hair out. The magistrate also says Frazier credibly alleged Courtland had threatened her and her family’s lives … and threw her phone against a wall to prevent her from calling 911.”

In addition to posting a series of brief appreciative posts upon his release, Courtland shared a very lengthy Facebook post in which he talked about his addiction issues as he pleaded with anyone else struggling to seek help:

There’s a beautiful world beyond the bull SH*T. Drug addiction is rapidly taking more and more lives EVERYDAY if u are a struggling addict and can’t escape your active addiction i suggest you get help IMMEDIATELY, find that one person in your life who u trust with EVERYONE HAS THAT ONE FRIEND OR FAMILY MEMBER make it known and stop procrastinating on seeing tomorrows sunrise because no matter what u may think no matter what u may believe…. this sh*t is REAL.

There’s a whole HEEP OF MOTHA F**KERS FALLING OUT FROM FATAL DRUG OVERDOSES . IT’S GETTIN WORSE EVERY SINGLE DAY AND I HATE TO SAY IT BUT sooner or later that one bad batch will take u out faster then a speeding bullet. I damn sure am not a saint but I damn sure AM STARING INTO MY SONS EYES RIGHT NOW AS WE SPEAK AND WAITING ON MY DAUGHTERS PHONE CALL WHEN SHE GETS OUT OF SCHOOL and i am using the fact that YES I am a addict but if i have to b addicted to something I choose being addicted to being a good father a better husband a good brother a awesome son.

I can’t imagine life after death if it’s a death from drug use … what’s more important? Having to go thru a withdrawal for a week tops OR chancing ur loved ones having to spend the rest of their lives thinking it’s their fault or even worse fatherless brotherless sonless husbandless etc. …. LIFE is a gift and that sh*t can b takin from u quick.

Nobody’s perfect and thus sh*t is a ABSOLUTE STRUGGLE BUTTT IT’S NOT impossible to beat u just have to GO 100 PERCENT AND DO THE RIGHT THING WHEN NOBODY’S LOOKING.. ONE DAY LIFE WILL TAKE UR SOUL AND THAT’S A GUARUNTEED FACT. FIND SOMETHING TO B ADDICTED TO OTHER THAN THE DEVIL…. go kiss ur family. Get help. Before I see another mother f**king R.I.P Facebook status on this mother f**ker. I begging u. IF U NEED SOMEONE TO TALK TO I WON’T JUDGE . HIT ME UP. PLEASE GOD PLEASEEEEEEEE GOD. I WILL DO WHATEVER I CAN TO HELP U LIVE.

IF U ARE TIRED OF LOOKING IN THE MIRROR AND TRYING TO LOOK AROUND THE PERSON U SEE TO TRY AND FIND UR SELF THEN MAYBE IT’S TIME TO STAND THE FUXK UP AND BE A WARRIOR… u can beat this I swear to god. But it’s a everyday lifestyle change u have to do it for urself… HIT ME up if I can b of any help. I WILL SPEND MY LIFE FINDING A WAY TO HELP U LIVE YOURS. IS THE HIGH WORTH THE PAIN??? GET HELP Runnnnnnnnnnnn and get help … we DO RECOVERRRRRRRRR

We’re certainly pulling for Courtland, and we hope that he is FINALLY able to maintain his sobriety and turn his life around.

Dear Lindsey Rogers,
I am so proud of the mother that u have become. It’s a honor to b your husband and I swear to god every morning when I wake up beside u I fall in love with u all over again. I cannot waitttttt to watch our son grow and watch u and I grow old together. U are more than my wife… ur my BESTFRIEND.. and u hold something more precious than anything in the world with u … MY heart. I love everything about u and life is exciting knowing that i get to spend every day of it by ur side … thank u for giving me something to die for… I love you